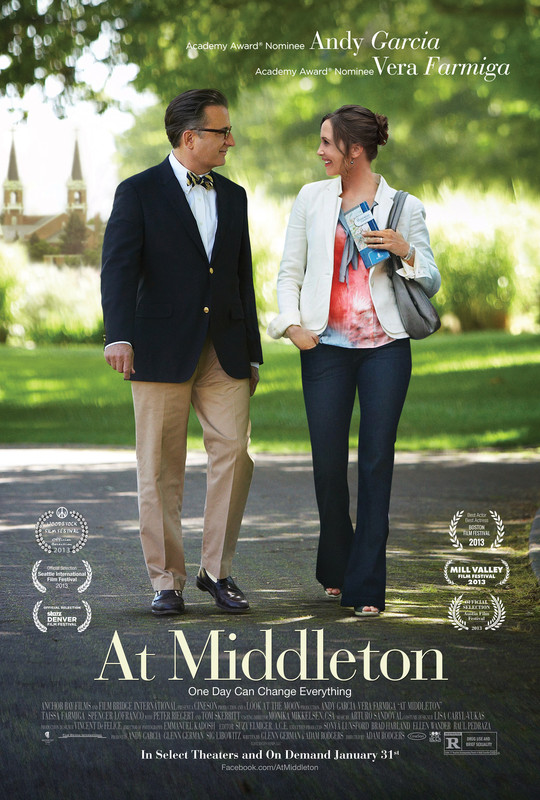 The romantic comedy has, of late, been in the doldrums as a genre.  It has largely descended into the act of watching people you hate make terrible jokes while falling into laughably unconvincing relationships with one another.  I was hoping that, given the participation of Vera Farmiga and Andy Garcia, At Middleton would break that mould.


Farmiga and Garcia each play parents bringing their children to an open day at Middleton college.  They meet early in the day, argue but then hit it off and end up separated from the tour group, spending the day getting to know each other and perhaps falling for each other.  For about an hour this has a level of charm about it.  Farmiga and Garcia are both fine actors and while they are saddled with rather cliché characters (Garcia the uptight Dad, Farmiga the free-spirited Mom) they spark off each other quite nicely.  The chemistry works and so do many of the jokes, especially a scene in which the two stumble into an acting class and end up improvising a scene.

The cuts back to the kids storyline (despite a decent performance from Tassia Farmiga, Vera's much younger sister, as her daughter) never generate much momentum and in the first hour they drain a bit of the energy that is being built up.  This becomes a much bigger problem as the film segues into its long third act.  At 100 minutes At Middleton could be cut by a fifth and lose very little.  The last 40 minutes drag out, especially in an interminable scene in which Garcia and Farmiga get stoned with a couple of college students only to end up shouting "The ballsack is life" over and over.  Remarkably this is not the worst line in the film.

Towards the end At Middleton also develops a sentimental streak a mile wide, which meant I stopped believing in the connection between these characters.  Worse, it provides the film with one of the most vomit inducing lines of 'romantic' dialogue since the ending of Four Weddings, as Farmiga turns to Garcia, whose character is a heart surgeon and says "I thought you fixed hearts".  As I said, Garcia and Farmiga are both very fine actors, but you can't expect anyone to make that line, nor quite a few of the others this script puts in their mouths, work.  They try hard, but the last third of the movie finds them increasingly defeated by the material.

At Middleton is actually one of the better American romantic comedies of recent years, but sadly that speaks to the catastrophic state of the genre more than it does the qualities of this film.
★★


How I Got Into College
Dir: Savage Steve Holland 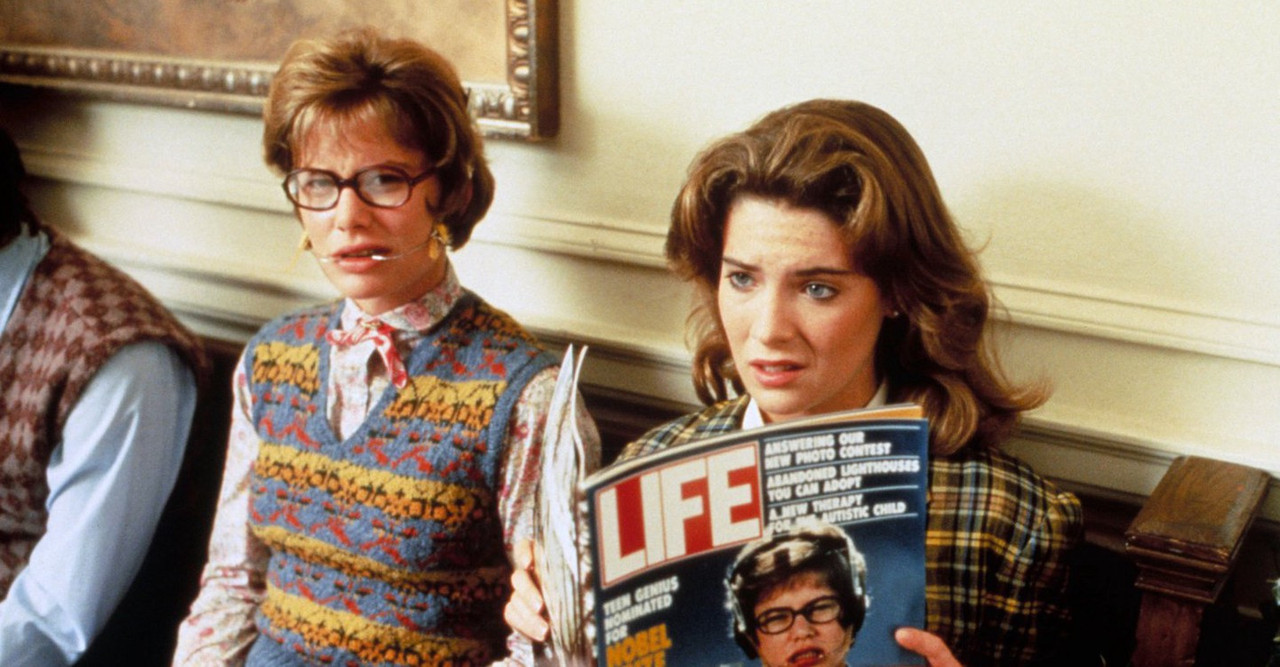 Savage Steve Holland is one of those filmmakers that I have always wished was given the opportunity to work more at feature length (since this film he has been plugging away in kids shows and TV movies), his anarchic take on the teen movie in Better Off Dead and One Crazy Summer marked him out as an individual voice in a scene that threatened to become stale, and this film is one with the same wonderfully skewed view of the world.

The plot is incredibly simple; High School senior Marlon (Corey Parker) is in love with Jessica Kailo (Lara Flynn Boyle) and his college plans revolve entirely around getting into the same school as her, as he's convinced that once she sees him as a grown up he might have a shot.  They're both trying to get into a small but prestigious school.  At the same time a young member of the admissions board (Anthony Edwards) is arguing that the school should look beyond grades when recruiting students.

Now, I understand that that doesn't sound that crazy, but it's not so much the structure as the approach that Holland takes to it that is so offbeat.  The surrealism begins from the first frames, with a question on Marlon's SAT's personified by two characters, A and B, who are endangered by Marlon's inability to get the right answer.  This is a comic device that just keeps on giving throughout the film.  How I Got Into College is not as fast with its jokes nor as incredibly odd as Better Off Dead, but it trades that off for a slightly more involved story, liberally sprinkled with gags (a running joke about the college admissions officer who accepted a fake application 'from' a pig is a particular joy).

Corey Parker may not be the most charismatic of leading men, but his Marlon comes off as a likeable goof and a decent centre for the film's crazier moments to spin around.  Similarly, Lara Flynn Boyle is no Diane Franklin (though she appears briefly in a priceless bit as Marlon's young stepmother), but she's attractive and appealing enough to convince us that Marlon would want to follow Julie to college.  That story could be creepy, but by the end it has developed an essential sweetness.  As the college recruiter Anthony Edwards has that down to earth decency that has always served him so well on screen, as well as pretty spot on comic timing.  The rest of the cast are largely cameos, but everyone has enormous fun (watch for Better Off Dead's Curtis Armstrong in a typically offbeat moment).

How I Got Into College may not quite be the lost classic that Holland's debut is, but it's a wonderfully inventive, silly and often gut-bustingly funny film of the like you simply don't see anymore.  Seek it out.
★★★
Posted by Sam Inglis at 09:00