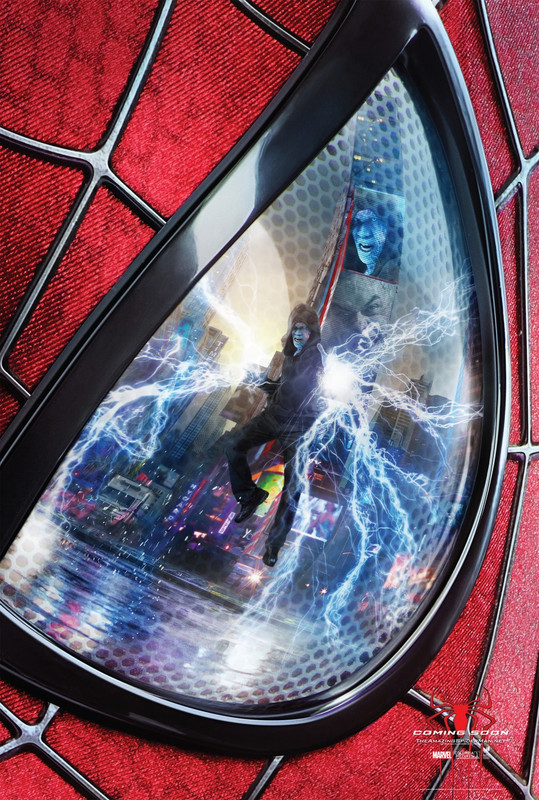 As a lifelong Spider-Man fan I was surprised that anyone even remotely liked Marc Webb's 2012 reboot of the franchise.  I hated it, finding it boring and, more importantly, a betrayal of almost everything that I've always loved about Spidey and his alter-ego Peter Parker.  The Amazing Spider-Man 2 is a better film than its predecessor, it almost had to be, but it's also a more frustrating film because for a few brief moments it gets Spidey as right as he's ever been on screen, but this only makes the many moments that don't work stand out even more.

The film picks up a few months after the first ends with Peter (Andrew Garfield) and his girlfriend Gwen Stacy (Emma Stone) graduating from high school (despite the fact that Garfield is quite obviously in his late twenties).  Peter seems comfortable with his dual identity as Spider-Man, but for the promise, he made to Gwen's father not to involve her and thus put her in danger.  Danger soon arrives in the forms of Max Dillon; an Oscorp worker transformed into Electro in an accident and Peter's old friend Harry Osborn (Dane DeHaan), desperate for a cure for the disease that killed his father.

Ghostly fathers hang heavy over this film.  Peter's parents were introduced in the previous film and there is more background on them here, Gwen's father died in the fight with the Lizard in the last film and now Peter is seeing him everywhere and an important shift in Harry Osborn's character is caused by his father's death.  This isn't a bad thematic idea; three central characters drawn together and set apart by the different ways in which they deal with the same trauma, but the film never really exploits the possibilities, instead using these ghosts merely as cheap dramatic motivators.  This is especially evident in the case of Gwen's father.  All that Denis Leary has to do in this film is stand around silently, basically expressionless.  This, however, may be preferable to what the film chooses to do with Peter's father (an admittedly well cast Campbell Scott).  One of the major problems with the first film was that it introduced Peter's father and suggested that he may have had a role in why Peter became Spider-Man, but never really did anything with it.  This time Webb goes in the opposite direction, slathering on exposition, along with an utterly pointless opening action scene, to make more use of Richard Parker.  The problem is that all it really adds is running time.  The film never finds the thematic weight it's clearly reaching for here, and instead this storyline only complicates the film's exposition.

Jamming in the storyline involving Peter's father means that other things go underexplored, and this is especially felt when it comes to the (too many) villains.  It's almost universally agreed that Sam Raimi's Spider-Man 3 suffered from an overabundance of villains, and so it is odd that this film should try so hard to replicate that problem.  True, Paul Giamatti's Rhino is much less of a presence than you might expect, but the uneven split of screentime between Electro and the Harry Osborn version of Green Goblin serves neither character very well and combining it with the relationship arc between Peter and Gwen and stories involving Richard Parker and an increasingly peripheral Aunt May (Sally Field) means that all the individual strands feel rushed.

The jam packed story is one of many reasons Electro doesn't work.  Jamie Foxx always sounded like strange casting in the role and that's not something that dissipates as you watch his performance.  In the early going he seems to be channeling Jim Carrey's pre-transformation Riddler from Batman Forever as a brilliant but nerdy scientist with an obsessive love of the film's hero.  It's an odd fit for an actor who gives off as much of a cool vibe as Foxx does, and even tragically awful hair doesn't change that.  However, this is not the extent of the film's problems when it comes to Electro.

Two issues raise their heads repeatedly.  The first is that the action scenes involving the character, for all their spectacular use of CGI, have some bizarrely awful filmmaking choices thrust upon them.  This is most notable when it comes to the sound design.  During Electro's first confrontation with Spidey, Hans Zimmer's score suddenly goes all faux dubstep, while a sample of Foxx's voice whispers away in the background.  This is clearly Dillon's broken psyche talking him up to his villainy as Electro, but combined with the score and the the flashy visuals, and especially because Foxx feels out of sorts in the role, it ends up more like the awful vocals to a dreadful music video that has somehow spliced itself into this superhero movie.  The other serious problem when it comes to Electro is this: he's a distraction.  There is a much more interesting villain developing in the form of Dane DeHaan's Harry Osborn, his motivations run deeper, his connection to Spidey is is personal and by the end of the film he's pretty formidable (even if he does look like Harry from Spider-Man 3 mated with Sloth from The Goonies), but it seems the film is unwilling to ask its audience's patience instead feeling it has to dish up action scenes at regular intervals to keep them engaged.  The Electro scenes feel as though they are simply marking time, doing little to advance the plot or the characters and this makes them boring even at their most spectacular.

One thing that has been mentioned as both a positive and a great step on from Raimi's films is the relationship between Peter and Gwen, and while I found there was more chemistry this time I still don't see the depth that people find in this relationship.  I found Gwen's character woefully underdeveloped in the previous film and little has changed here.  Her apparent scientific brilliance is a plot crutch at best and while she has a certain snarky charm there's not much personality there.  This, for me, is something I often find with Emma Stone, I suspect I'd like her if we met, she seems fun and she's certainly attractive, but all I see when I watch her on screen is Emma Stone.  Gwen Stacy was never the deepest of characters, but the actress never disappears for me and that undermines the whole relationship thread. 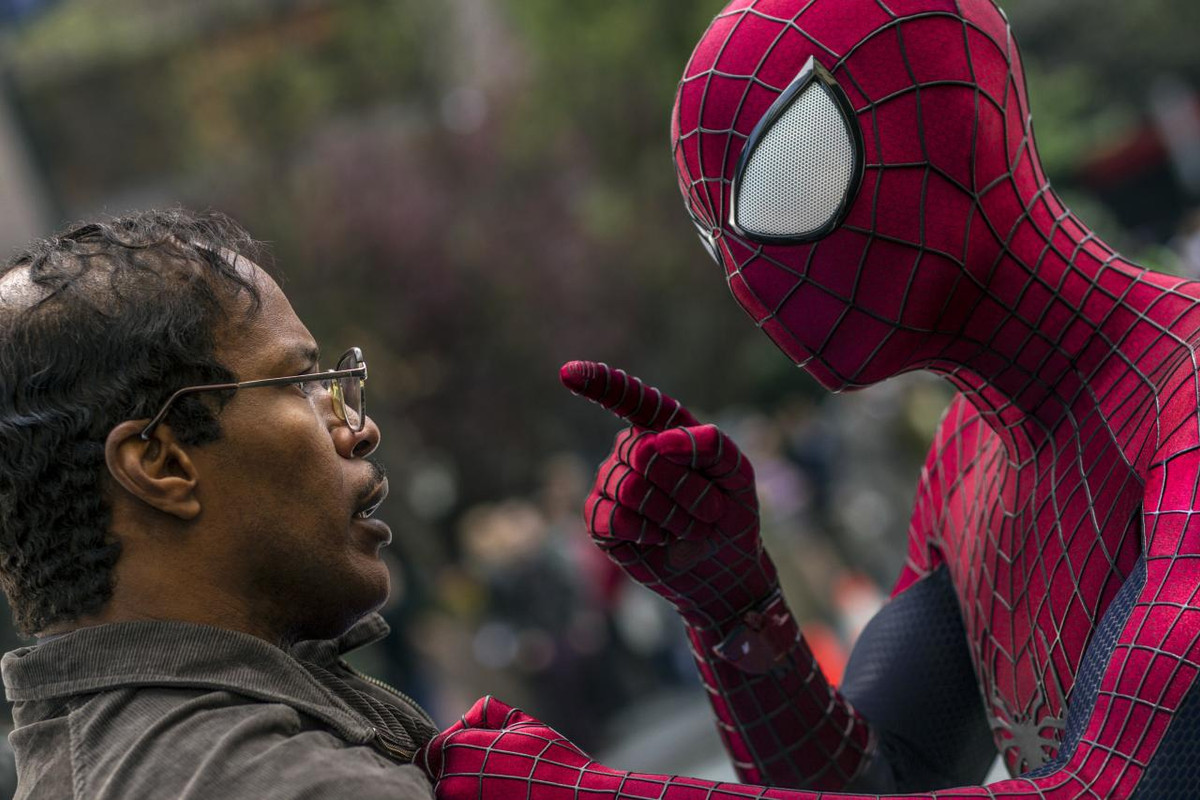 Much more impressive in the acting stakes is Dane DeHaan, bringing an indie cred to the role of Harry Osborn.  He's agreeably slimy from the start and while this does make you wonder why he and Peter were ever friends it largely works for the character's arc.  DeHaan is the only actor to really find and chart a great evolution in his character and he does it with such limited screentime that you can't help but wish some the side stories were shunted aside in his favour.  It will be interesting to see where he takes Harry in the future.

The worst aspect of the previous film was its depiction of Peter - to put it bluntly, he was an arsehole - but that has been fixed here.  Andrew Garfield seems more comfortable with the character this time around and the screenplay comes closer to finding the line between nerdy and charming that Peter has always walked.  While it doesn't always get him right, Amazing Spider-Man 2 does also have perhaps the two best Spider-Man scenes I've yet seen, it's unfortunate that they are at opposite ends of the film, but at least they exist.  Both times that we see Spidey squaring off against Rhino something seems to click.  The forced wisecracking of the last film (and moments of Raimi's trilogy) goes away and there he is; the sharp, sarcastic, funny, cool Spider-Man I've loved for nearly 30 years.  Unfortunately, during the long and tedious middle section of the film this Spidey only shows up intermittently; there will be a few cool lines here and there, but never a whole scene that nails it the way that these two do.  Another way in which the film comes much closer to getting Spider-Man right is with the costume.  The previous film's dark redesign always felt off for me and I was glad to see a return to a brighter and more classical look, reminiscent of John Romita Sr's art.

The other thing that works is the film's ending.  The big battle with Electro is something of an anti-climax, but one key decision that many Spidey fans were tipped off to by a certain costume choice has the potential to be a game-changer in terms of the dynamics and personal stakes of the series.  Even as it was happening I was silently saying 'don't take it back' and the moment certainly seems to have a real finality about it.  Hopefully, this will end up developing the series in interesting ways in both Sinister Six and Amazing Spider-Man 3.

Amazing Spider-Man 2 addresses some of the problems of its predecessor, but it shares many of them too.  The tone is sometimes uncertain (especially in the scenes between Peter and Aunt May), and there are, again, far too many storylines and characters, which contributes to another pressing issue: this doesn't feel like a film in its own right.  We're used to the first film in a superhero franchise being a glorified trailer to set the table for its own sequel, but that seems to be exactly what Amazing Spider-Man 2 is doing as well.  Thanks to the success of the last film and this film's presumed even bigger blockbuster status, Spider-Man is about to become a mega franchise along the lines of Marvel's Avengers films.  This isn't a terrible idea, but in practice it means that Amazing Spider-Man 2 ends up as a 140 minute trailer for its own sequels rather than a standalone film.  Everything that is interesting here (and much that isn't) is mere setup to be paid off down the line.  Only the dull Electro storyline comes to an end, and even that is questionable in its finality.  One of the most naked bits of setup is the appearance of Felicity Jones as Harry's secretary Felecia, thankless in this film but catnip for the fans for next time.  Setup is great when combined with a satisfyingly self-contained story (see Captain America: The Winter Soldier), but here the final scene only confirms the unsatisfying impression that this simply isn't a standalone film.

I wish I had liked The Amazing Spider-Man 2 more, because in it there are flashes of a movie that the 8 year old Spidey obsessive me would have loved, but ultimately too much of it is either marking time or setting up a franchise and too little of it is concerned with telling a focused and exciting story with these characters.
★★
Posted by Sam Inglis at 14:17