Muppets Most Wanted [U] 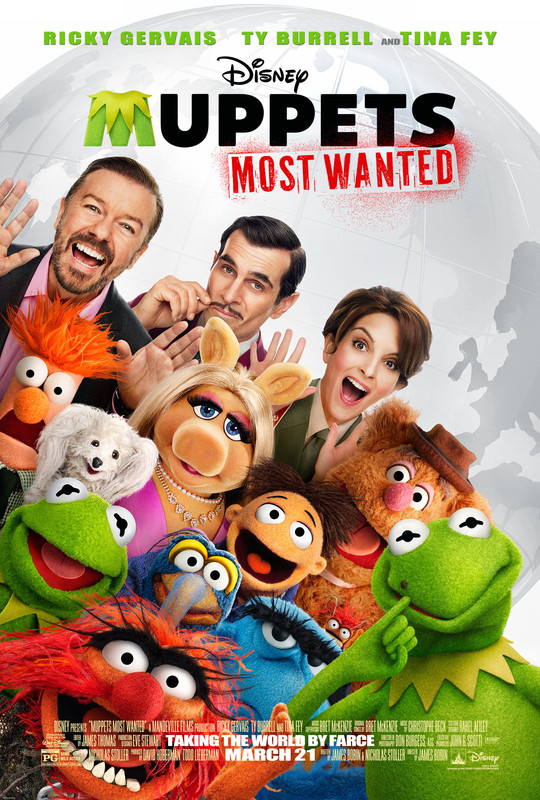 Sequels are a strange sort of contract between a filmmaker and an audience.  One party promises to deliver something like what the other party previously enjoyed, but without making it so similar that the audience feels that they have been short changed.  On the face of it, Muppets Most Wanted delivers to the letter on this contract, but the ways in which it departs from 2012's wonderful The Muppets are likely to be disappointing, especially for an adult audience.

The Muppets often take on familiar film structures and give them their own distinctive spin, last time it was the old canard of getting the band back together/putting on a show, this time it's the caper movie. The film revolves around a case of mistaken identity; when 'the world's most dangerous frog', Constantine, escapes from a Siberian gulag his uncanny resemblance to Kermit allows him to take Kermit's place at the head of The Muppet Show, using it as a front for a series of heists, while Kermit is recaptured by Nadia (Tina Fey) and thrown into the gulag.

The film resumes directly after the final shot of The Muppets (complete with obvious body doubles for Jason Segel and Amy Adams), segueing into a song about the idea of doing a sequel.  This is one of the film's best numbers, suggesting some amusing ideas including one priceless spoof that is the best gag in the whole film.  Soon after, the gang are won over by Dominic Badguy (groan), played by Ricky Gervais (GROAN), who offers to promote their tour and we're off on the caper.

The great thing about The Muppets was that it set the emotional stakes high.  Remember that scene where we find Fozzie in his Las Vegas 'dressing room', or Pictures In My Head?  Those moments, along with many others, were funny, but they combined the laughs with a deep emotional resonance that connected with the audience's relationship to these characters, who many of them have been watching all their lives.  This depth is absent from Muppets Most Wanted.  A few scenes about Miss Piggy's desire to marry Kermit attempt to find something like this level of connection, but with Kermit off in his own story it just doesn't stick.

Alongside its pathos and emotion, The Muppets was bust a gut funny, and that's another area in which Muppets Most Wanted simply doesn't bear up to its predecessor.  There are some funny moments, but the film leans too heavily on cameos, many of which clunk, and for the most part is only mildly funny.  Ricky Gervais is more tolerable than usual as Dominic, but there's still a sense of smugness about him, and I simply don't find him amusing (though the fact that his funniest line comes when he's introduced is unhelpful).  Tina Fey works hard and has a solid enough comedy Russian accent.  She seems to be dubbed for her big song, which is fine, but seems a missed opportunity for some good jokes.  Fey gets much of the funniest stuff in the film as an outwardly cruel gulag boss, mining laughs from the affection she sometimes has for the prisoners (all played by cameoing stars, including one who gets a very funny namecheck).

The gulag scenes are easily the film's best, not least because they reunite us with Kermit, whose almost total absence from the main storyline just feels strange and makes this feel much less of a Muppet movie.  This side of the film also provides it with a little of the 'let's put on a show' stuff that the Muppets do best.  The caper movie falls down for the simple reason that it just isn't that much fun.  Ty Burrell does his best Jean Dujardin as an Interpol cop paired with Sam Eagle's CIA agent (their joke about badges goes on far too long), but Gervais and Constantine make for anemic villains and the jokes just aren't that inventive.  At two hours or so the movie drags, with the so-so songs (I couldn't hum you any of them bar 'We're Doing A Sequel') and  sometimes flat gags making it wheeze its way to the finish line.  It's perhaps more kid oriented than the previous film, but it's not as if the adult skew of some of the jokes and the emotion of The Muppets (or Frozen, for that matter) left the kids in the audiences I saw it with behind.  By contrast, Muppets Most Wanted often felt like it was leaving the adult audience behind, whether on purpose or by accident.

Ultimately the biggest issue with Muppets Most Wanted is that as I sit here and write this I find myself thinking back on gags and songs and moments not from it but from The Muppets.  That film has lasted in my memory, this one vanished within moments of the credits rolling.
★★☆☆☆
Posted by Sam Inglis at 18:31