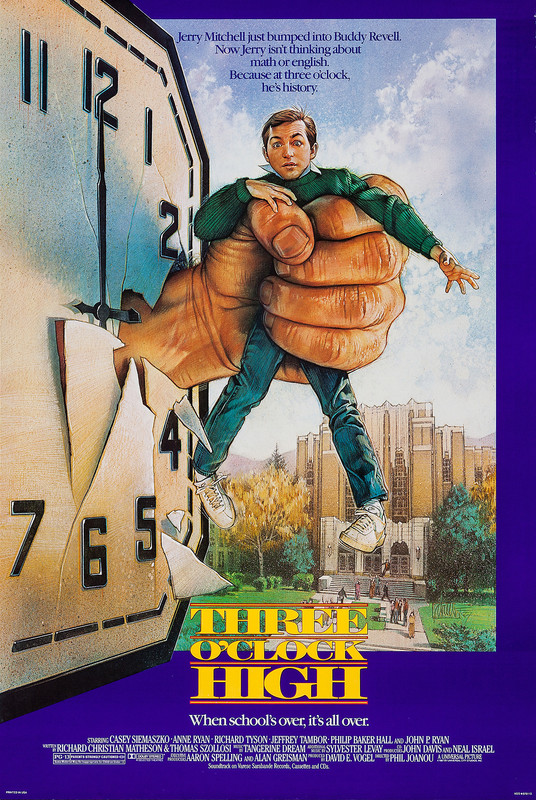 High Noon goes to High School must, surely, have been the pitch for this odd little example of the 80's teen movie.  Casey Siemaszko plays Jerry Mitchell, a nerdy senior who seems never to have been in trouble at school, writes for the school paper and runs the on campus supply shop.  One day Buddy Revelle (Richard Tyson) a new student with a bad reputation arrives and, when Siemaszko accidentally upsets him, challenges him to a fight after school at 3pm.

Three O'Clock High is pretty bog standard nerd comes good stuff.  It hits all the expected beats reasonably well, but does little that is unexpected.  For example, early on we see Jerry driving a pretty female friend (Annie Ryan) to school while clearly crushing on another girl who drives past them.  Guess how the movie ends.  The end result of the central conflict is also never in doubt, which is fine, that's a valid character arc for Jerry to take, but simply resetting it in high school does little to make this old chestnut feel new.

What Three O'Clock High does have going for it is a set of spirited performances.  Siemaszko, who I've not seen much of, is a solid enough lead; nerdy without seeming like he'd be a total outcast and he's a lot of fun as Jerry's attempts to avoid fighting become more outlandish, especially in a scene in which he turns a book report into an exercise in hitting on his teacher (the gorgeous Caitlin O'Heaney) so that he will get detention.  There is a fun performance from Stacy Glick as Jerry's wise beyond her years sister (a role that anticipates Chloe Moretz' part in (500) Days of Summer) and Annie Ryan makes for an appealing love interest.  There is also fun to be had in spotting people in early roles; Jeffrey Tambor appears as a teacher and Philip Baker Hall as a detective.  Unfortunately, there is a problem in the casting with Richard Tyson.  I've only otherwise seen Tyson in Kindergarten Cop and there, as here, he's far too flat a presence to feel truly threatening.  He tries, but you get the feeling that if you messed up his hair he'd run off crying.

The other issue that I had with Three O'Clock High stemmed from the final fight.  Of course we want to see Jerry beat Buddy who, the film establishes, is quite a bully, but Jerry is shown throughout as a thinker rather than a fighter and I would have liked to see him think his way to victory.  Instead, the film's ultimate message seems to be: “Solve your problems: steal a bully's brass knuckles and hit him in the face” which seems... unhelpful at best.  There are a few good things here, but ultimately I think the message is confused and the film is uneven.
★★☆☆☆ 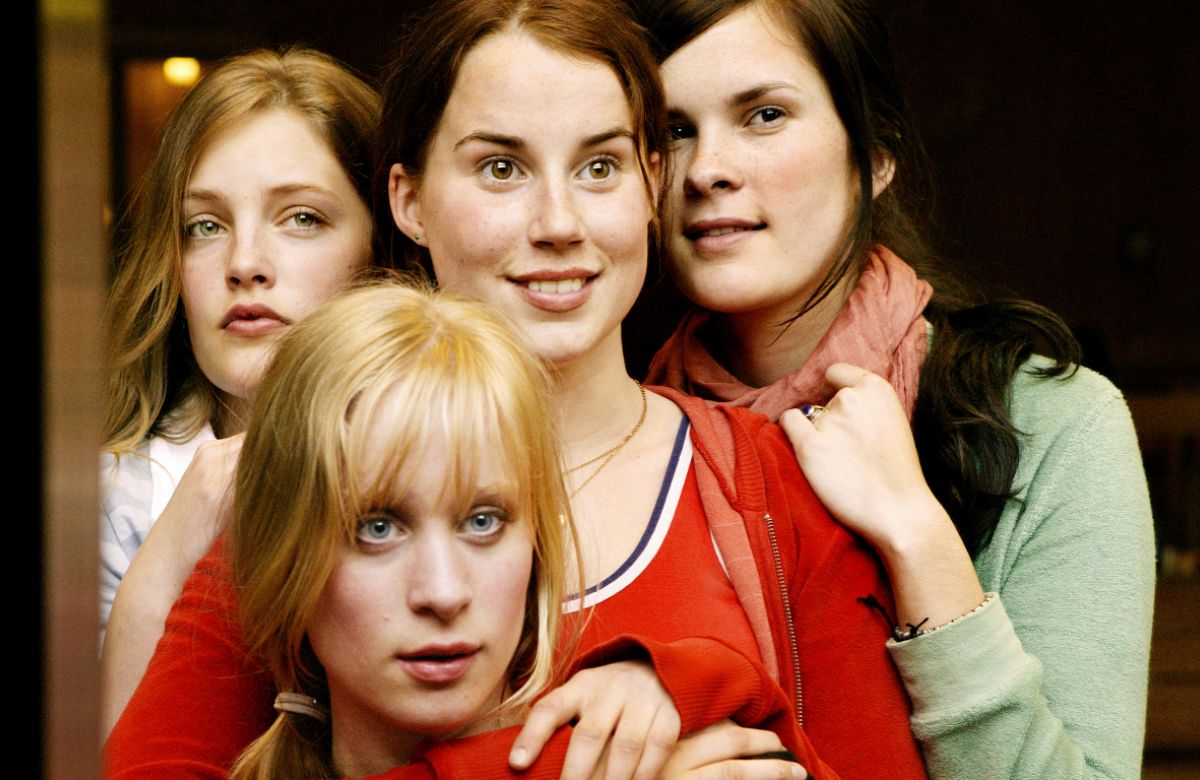 Bea (Kaia Foss) and her friends are all sixteen, but she's the oldest (sixteen and nine months) and the only one of her close group of four to still be a virgin.  When school heartthrob Daniel Vik (Espen Koulman-Hoiner) shows an interest in Bea her more experienced friend Mia (Kamilla Gronli Hartvig) says that before she goes out with Daniel she will need more experience, so she introduces Bea to 19 year old Anders (Kim S Falck-Jorgensen), who is supposed to be there largely for practice purposes, but who falls for Bea, complicating things when she does get together with Daniel.

Scandinavian coming of age movies often deal with some of the harsher truths of adolescence in a way that is more upfront than their American counterparts.  The tradeoff is that this can mean that they can be very dark and depressing.  Bare Bea, for the most part, manages to balance these two issues; it does have a somewhat more realistic take on teenage matters than, say, She's All That, but it also manages to keep the tone quite light (on one occasion to a fault).  It's perhaps best when combining these two facets; slightly exaggerating Bea's anxiousness to be good at sex the first time she sleeps with Daniel, the film has her try to replicate a Kama Sutra position; baffling him and embarrassing her.  This and the chaotic sex scene that follows are heightened, but they capture an essential truth about how awkward and embarrassing a first time can be.

There is a similar balance in how the film portrays the relationship between the four girls.  The group is established well; okay the characters are quite broadly drawn, but the dynamic is well drawn and even if it has third act break up issues similar to those of a lot of romantic comedies, the performances, which feel loose and natural for the most part, pull it through.

Kaia Foss makes for an appealing lead; girl next door pretty and credibly smart (which plays into sub-plot about her wanting to go to Canada for a writing course) you can see why both Anders and the rather more shallow Daniel would be chasing her.  Foss makes Bea sympathetic and when she starts doing a few mean things (running out on Anders to go out with Daniel, for instance) you chalk it up to being naïve rather than pointedly nasty.  Foss makes a creditable debut here, proving adept in both the dramatic and comedic moments, it's a shame she's not gone on to do more in the ten years since.

The support is also largely good.  Kamilla Gronli Hartvig, Ida Thurman-Moe and Maria Brinch all contribute to the convincing group dynamic between the friends, while Kim S Falck-Jorgensen made Anders; the nice guy who seems to have been set up to finish last, a character that I could easily identify with.  Only Espen Koulman-Hoiner really lets the side down, but that might be more the screenplay's fault than his.  At first, Daniel is seen through the rose-tinted glasses that Bea and her friends have on before Bea gets to know him and while he changes once Bea gets closer to him he doesn't really develop much more depth.

For the most part, Bare Bea manages to keep a relative lightness while dealing with some serious issues and quite a bit of disappointment for its main character, but unfortunately it abandons this as the film comes to a close, tying up loose ends in a way that feels unearned, unbelievable and like little more than a cheap way to send the teenage audience that is surely meant to relate to Bea out with a smile on their faces.  It's a pity, because this lapse of consistency aside this is a nicely done, if rather by the numbers, teen movie.
★★★☆☆ 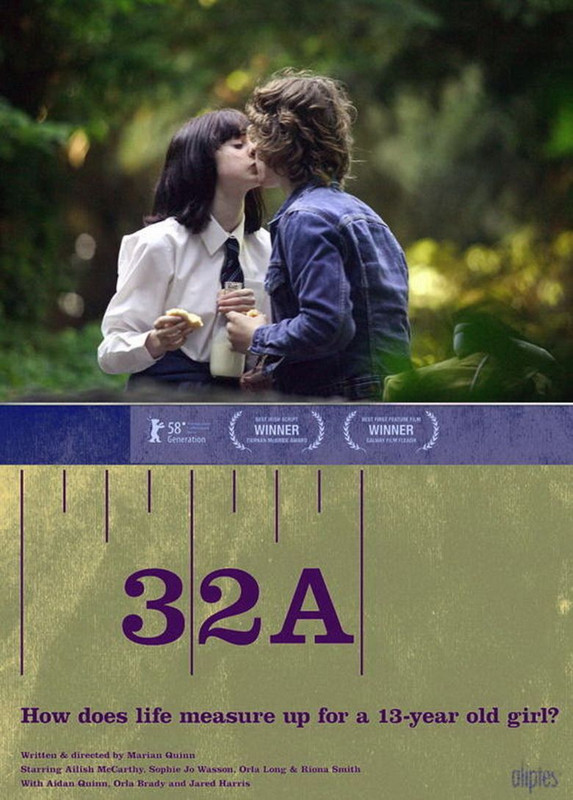 13-year-old Maeve (Ailish McCarthy) and her friends are desperate to grow up.  They're in that place between childhood and starting to deal with adult things, they're changing and that is sometimes testing for friendship, especially when Maeve gets her first boyfriend and it happens to be Brian Power (Shane McDaid), a cool older boy who all the girls admire from afar.  Things come to a head when Maeve blows off her friend Ruth (Sophie Jo Wasson) on the night all the girls are supposed to be supporting her as she's meant to meet her Father (Jared Harris) for the first time in years.

I don't know for sure whether 32A is based on writer/director Marian Quinn's own early teens, but I wouldn't be surprised, even though it's set in Dublin rather than in Illinois where Quinn grew up there is a real feeling here of something personal, perhaps remembered rather than observed.   This sense is particularly strong in the relationship between Maeve and her central group of four friends.  The dynamic between them is extremely well observed, both in their closeness as they go through typical teenage moments like comparing their development, practicing kissing and discussing their futures (a conversation about marriage and kids has a real ring of truth thanks to how OLD they consider 30), and the way that their friendship fractures at times.

I liked that both Marian Quinn and Ailish McCarthy were willing to take Maeve to a place where she is outright unlikeable.  You can see why, in her excitement about being the one who has been chosen by this popular older boy, she acts as she does towards her friends, but that doesn't make what she does to Ruth - even hiding so that she doesn't have to go with her the night she's supposed to meet her Father - any more palatable as a choice.  McCarthy is an engaging presence throughout, and even when Maeve is at her least likeable you root for her, except perhaps when she slaps her adorable little sister in the street.

The drama itself is a little bit by the numbers.  It's obvious that Brian Power won't turn out to live up to the image the girls had of him, obvious how friendships will be broken and mended, obvious how Ruth's storyline with her Dad will end up.  Predictable it may be, but it's tough to mind that much, thanks to a cast who give engaging and realistic performances, a script that, even when it hits cliché, does it honestly and a strong sense of time and place in Marian Quinn's direction.
★★★☆☆
Posted by Sam Inglis at 19:42