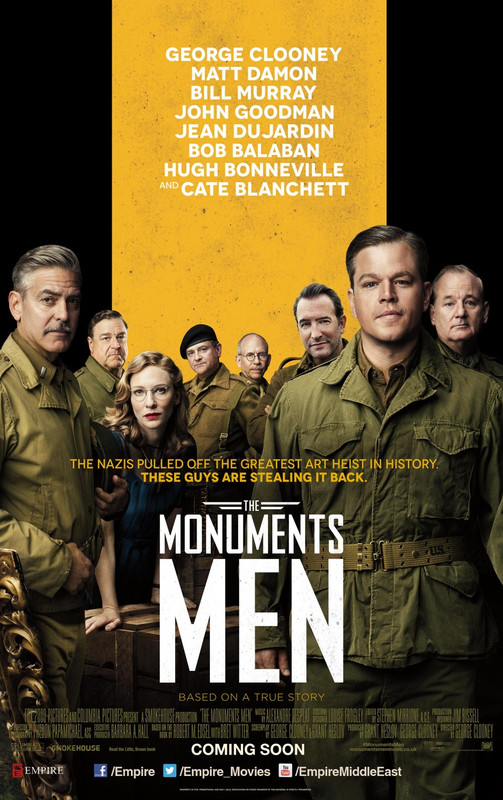 There is something peculiarly old-fashioned about George Clooney as both a movie star and a filmmaker.  On screen, he has a charisma that suggests a studio star like Cary Grant or Clark Gable.  Behind the camera, he shows an interest in classical storytelling and a type of filmmaking that looks back to the slower paced stories of 70's cinema and sometimes further (his screwball comedy Leatherheads).  You'd think he'd be well suited to making and starring in a World War 2 set men on a mission movie.  On this evidence, he's not.  At all.

Based, apparently rather loosely, on the true story of a unit of art experts dispatched in the dying days of World War 2 to recover and return to their rightful owners the privately owned works of art stolen and hoarded by the Nazis, the film attempts to combine an extremely earnestly meant question of whether art, even great art, is worth someone's life with a caper movie, tracing various stories as this mismatched group of unsuited soldiers attempts various parts of its mission.

The chief problem of the film is easily diagnosed; Clooney, as writer, director and leading actor, completely fails to reconcile the dual tones that he's trying to strike here.  At one moment the film wants us to be emotional as Bill Murray's character listens to his daughter sing 'Have Yourself A Merry Little Christmas' on a record sent from home.  The next moment the film will reach for a jaunty tone, as in the scene where Murray has to have emergency dental treatment or Matt Damon hilariously treads on a mine.  Even when he's more set on the tone he's going for, Clooney botches it.  The central question and theme of the film is stated and restated over and over, but the film only ever engages with the question of whether art is worth a life (or lives) in a way that is at once incredibly perfunctory and so mawkish that it's like being drowned in treacle while someone screams 'IS ART WORTH THIS MAN'S LIFE?' at you over and over.  The other problem with this is that every time a speech is given on this subject (four times during the film) it is substantially the same.  There are no new ideas in the last speech in the film as compared to the first, two long hours earlier.

The tonal issues might be less of a burden if the film achieved the half-serious adventure movie tone (think Indiana Jones with historical accuracy) that it goes for outside of its mawkishness.  It doesn't.  Splitting the group into smaller groups and sending them all off on their own adventures (Bill Murray and Bob Balaban as a sarcastic odd couple; John Goodman's sad bulldog look paired with Jean Dujardin's benevolent version of The Joker's smile; Matt Damon trying to get intelligence material out of Cate Blanchett) means that the film suffers from a fatal lack of focus and that we hardly get to know the characters.  but worse, none of these little stories are very engaging in and of themselves.  Even when they do throw up the odd decent scene it's derivative of something better.  Murray and Balaban's interlude in a farmer's house plays like the opening of Inglourious Basterds, but without Christoph Waltz or any tension, yet still counts as one of the film's strongest moments.  You'd expect a smattering of action in these scenes as well.  We get two perfunctory and derivative scenes that could have been lifted from any number of films.

You have to give The Monuments Men this much: it has a great cast, but they're wasted.  Clooney is blandly heroic when not in lecture mode (and he's in lecture mode a lot).  Murray and Balaban try hard to be the comic relief, but their material isn't that funny and the rest of the film often has a jarringly comic tone that takes away from that function.  Most of the others are simply betrayed by bad writing, giving them dull and underdeveloped characters.  It is, however, worth singling out Cate Blanchett; a brilliant actress, she gives the single worst performance of her career here.  She has no character to play and her role is almost totally redundant in the story, so rather than a character she ends up playing an accent.  A terrible, terrible accent.  She's supposed to be French but there's German and comedy Russian in there too.  It's laughably bad.

Even when the film does, 90 minutes in, acquire a little momentum, Clooney simply can't sustain it.  He's wedded closely enough to history that the antagonists of the film are kept almost completely offscreen, but this means that there is no sense of peril in the journey to the goal, and thus little sense of achievement when it is reached.  I don't see the problem with taking inspiration from history and then making it more cinematic.  I wish Clooney had looked more to Indiana Jones; the history is largely window dressing, but the films are exciting, fun, funny and engaging.  The Monuments Men, on the other hand, feels stuffy; like a historical reenactment that only wants to show us the dullest bits.

George Clooney can be an interesting filmmaker, and it's great to see someone showing such dedication in his career to trying to bring back a somewhat old-fashioned patience in storytelling, but he's come unstuck here because The Monuments Men mistakes sentimentality for moral questioning and weds it to a poorly told story.  These men deserved better, and so did the question of whether art was worth their lives.
★☆☆☆☆
Posted by Sam Inglis at 10:56