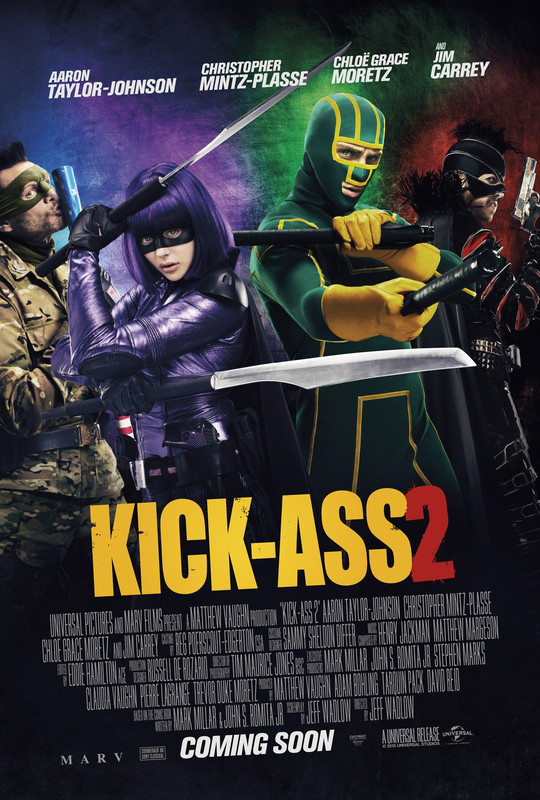 I've struggled with the opening paragraph of this review.  You see, an opening paragraph is about setting a tone, and tone is vital.  Finding the right tone can be the difference between saying what you have set out to say articulately and completely botching your argument.  On that note: Kick Ass 2.

Three years ago, Kick Ass came out of nowhere, certainly if you weren't a big comic book reader.  It offended many with its brutal violence, glib comedy and dirty mouth and by attaching all of those things to, among others, Hit Girl, played by a then 11 year old Chloe Grace Moretz.  For me though, Kick Ass struck exactly the right tone.  Its violence, for instance, was just brutal enough to feel painful and make you feel that consequence was, in this film's world, much more acute than in the Spider-Man films.  On the other hand it was just heightened enough, and leavened with just enough humour that I wasn't offended by the violence and felt free to enjoy the film as a series of visceral set pieces.  This is exactly where Kick Ass 2 begins to go wrong.

The biggest problem that Kick Ass 2 has is that it is very little and very seldom fun to watch.  There are quite a few reasons for this, but the major one is the prevailing tone of the film.  It's not that this is a darker film - let's face it, the first featured a Father who had taught his daughter to kill since she was six years old - butthat it feels more out and out mean, and lacks the lightness of touch that I felt in the first film.  This is especially reflected in the film's violence, which this time round, for the most part, lacks the slight fantastical edge of the original.  This in turn means that the film, rather than feeling like it is continuing the first movie's parody of the 'with great power comes great responsibility' line of many superhero films, ping pongs between preaching that line and depictions of violence that make that preaching feel disingenuous.  Ultimately the whole 'this is real' emphasis of this film works against it in a lot of ways.

The tonal issues are not the only balance problem that Kick Ass 2 has.  The original film was certainly stolen by Hit Girl and Big Daddy, but it was definitely a Kick Ass movie.  The thrust of the story came from geeky Dave Lizewski (played here, again, by Aaron Taylor-Johnson) wondering why nobody had ever decided to become a superhero, putting on a suit and - at least somewhat - coming of age in his new guise as Kick Ass.  Kick Ass 2, by contrast, barely feels like a Kick Ass movie, seeming to go out of its way to downplay the character's importance, from placing him in a superhero team (not even as the leader) to giving him a perfunctory storyline which merely repeats, almost beat for beat, Hit Girl's storyline from the first film.  In terms of character development it seems that Kick Ass, if he had moved to roughly square 5 of his superhero journey by the end of the previous film, starts this one back at square one.  It's not very satisfying, and Taylor-Johnson's muted and dull performance really doesn't help matters.

There is a void left in this film by Nicolas Cage, whose eccentric turn as Big Daddy - his best work for many years - was a real highlight of the previous film.  Wadlow attempts to fill this void by casting Jim Carrey as born again Christian and Justice Forever leader Colonel Stars and Stripes.  Like Cage, Carrey is a fine and versatile actor who is frequently prone to laziness.  Unlike Cage, this franchise doesn't find him in especially high gear.  The character is (part of) a transparent attempt to give Kick Ass the same emotional journey that Hit Girl had in the first film, but it doesn't work because there's no depth to any connection between him and Colonel Stars, and nor is the character that memorable in his own right, perhaps because he's one of approximately 700 new characters that aren't all that well developed.

As I said though, this film barely counts as Kick Ass movie, it's much more interested in supervillain The Motherfucker (Christopher Mintz-Plasse, reprising his role as Chris D'Amico, formerly Red Mist) and in Hit Girl.  The Motherfucker is, from his frequently-repeated-to-ever-diminishing-comic-returns name on down, a perfect distillation of the overarching tonal issues.  He is at once too evil to be especially funny and too jokey in his rendering to feel like a serious threat, it's perhaps the most notable way in which the film tries to have its cake and eat it, but instead ends up dropping the cake entirely. 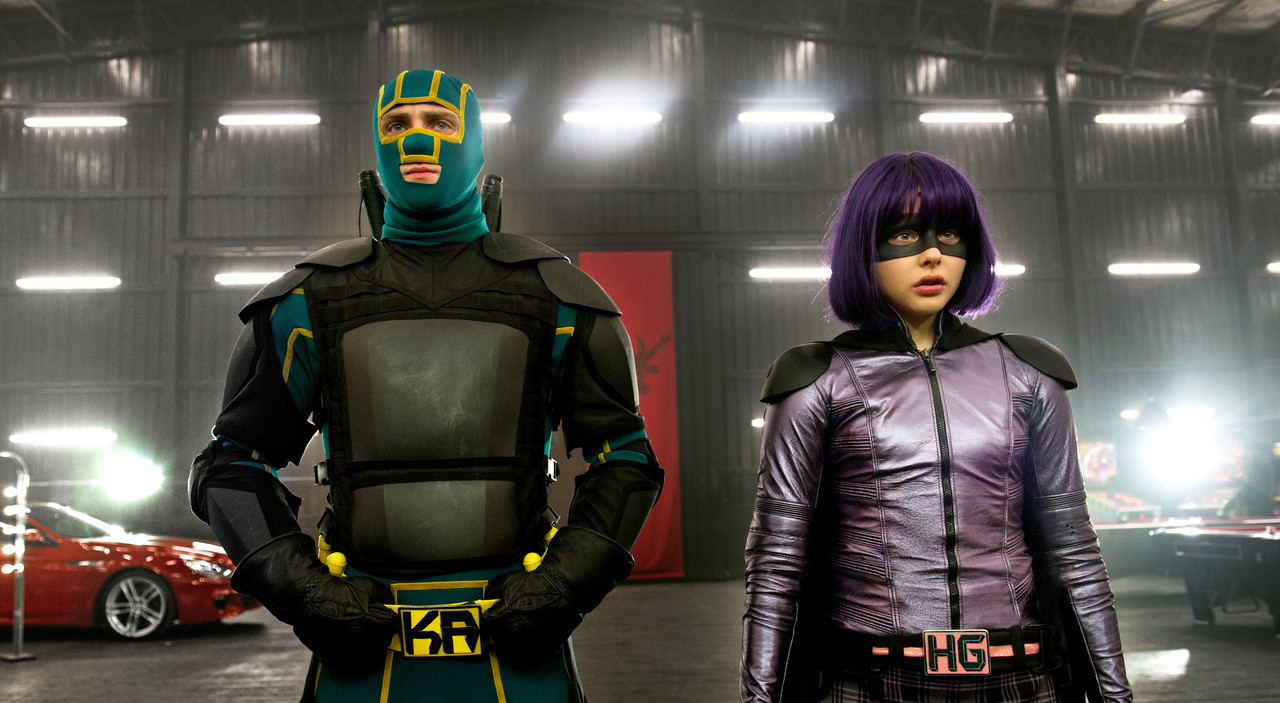 Focusing much of the film around Chloe Grace Moretz as Mindy/Hit Girl isn't a bad idea, she's easily the most charismatic performer here, and even when Wadlow's screenplay puts try too hard faux badass lines like "I'm gonna go Saudi Arabia on your ass and cut your hands off" in her mouth she makes the best of them.  This line, and many others, feel like they are aiming to replicate the tone of Jane Goldman and Matthew Vaughn's writing from the first film, but to be fair Moretz also gets most of the film's (limited) good lines.  Moretz has great instincts as an actor, and the way she tosses away lines like "Robin wishes he was me" works really well for Hit Girl's no bullshit persona.

For much of the film, however, Mindy is trying not to be Hit Girl, and instead we get a truncated remake of Mean Girls featuring Mindy.  Mean Girls was a film I never imagined I'd like, but ended up loving, and however good Moretz is this part of Kick Ass 2 comes off as a pale imitation that substitutes the wit of that film for swearing and, eventually, a stupid gross out gag.  As with so much else in this film it's not that the idea is bad, and in this case Moretz makes a few individual scenes play, so much as it is badly executed.

The one thing that unambiguously works is the relationship between Dave and Mindy.  Their training sequences early in the film recapture some of the snap of the dialogue between them in the first film and the added element of Mindy's sudden awareness of her hormones, beautifully played by Moretz, who also visibly lifts Taylor-Johnson's performance, does add a new and different element to that relationship.

For everything that does work - for instance the exhilarating and fun action sequence with Mother Russia (Olga Kurlinka) destroying about five Police cars - three things don't work.  This is as true of the action as anything else.  As much as anything the first Kick Ass excels as an action film, with a wide variety of styles and situations, all shot and cut in a way that - in a rare touch for recent mainstream action cinema - actually makes spatial sense.  The variety is much more limited here, particularly when it comes to the stylistic choices in the action scenes, there is nothing remotely as inventive as the warehouse scene from the original nor as intense as either the corridor or the lumber plant scenes.  Another issue that seems to dog the film is that of stunt doubling.  It's hard to define exactly what it is about Jeff Wadlow's shooting and cutting style (maybe the timing of his cutaways) but it seemed to me much more obvious this time out when Moretz in particular was being doubled.

For the most part I found Kick Ass 2 unengaging.  I'm tempted to say that this is because you can only give the superhero movie this sort of kick up the arse once, but that ignores the fact that Kick Ass is a very rewatchable film.  Jeff Wadlow is on record as being a big fan of the first film, and that, ultimately, is what Kick Ass 2 feels like to me; a big budget fan film by someone who doesn't quite understand how and why the first film worked.
★★☆☆☆
Posted by Sam Inglis at 11:49