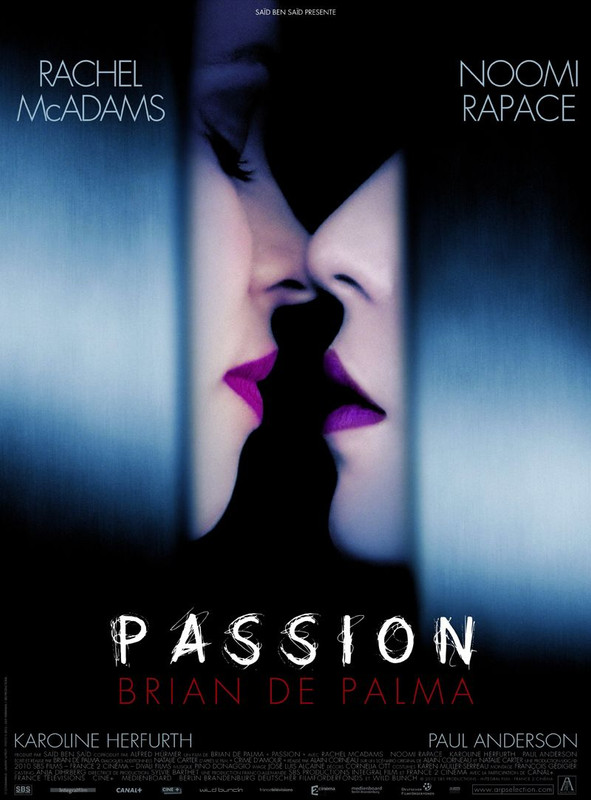 Once a filmmaker has established a sizeable body of work you can usually see an ebb and flow within it; moments or periods of great inspiration, alternating with films, or even stretches of films, that don't work.  This is perhaps especially true of those filmmakers who really stamp their identity on their work, filmmakers like Brian DePalma.  Before 1993 DePalma had made good films and bad ones, along with several (Blow Out, Carlito's Way, Carrie and arguably Dressed to Kill and Scarface) great ones, but after Carlito's Way, based on what I've seen - which is most of his subsequent work, bar the reportedly interesting Femme Fatale - his talent completely deserted him.

Passion, a very close remake of Alain Corneau's French language Love Crime, which was made in 2010 but released here only at the end of 2012, certainly finds DePalma on firmer ground than, say, the outright unwatchable Redacted, but it certainly doesn't find him on inspired or even middling form.  The plot, just as it was in the original film, is erotic thriller by numbers.  Christine (Rachel McAdams) and her junior executive Isabelle (Noomi Rapace) are working on an advertising campaign for a new smartphone, initially they seem close, perhaps even attracted to one another, but when Christine claims one of Isabelle's ideas as her own it begins a rivalry which also entangles Christine's on-off lover Dirk (Paul Anderson) and Isabelle's young assistant Dani (Karoline Herfurth).

To be fair to Brian DePalma, and to the critics who have enjoyed this film more than I did, Passion is not entirely without merit.  DePalma does stamp more authorial identity on this film than we've seen for a while, and there are some striking images (they don't all entirely work for the film, but we'll come back to that point).  On the level of pure aesthetics, Passion does often look good, even in the more mundane looking scenes the production design and photography are strong, giving the film a sleek and stylish veneer.   Plot wise, DePalma does add a sub-plot about Isabelle's assistant that seems initially tacked on for titillating purposes, but does lead to the film's only good sustained scene.  That scene takes up about ten minutes towards the end where, preposterous though it is (and was in a slightly different way Love Crime), the plot wraps up in a way that is reasonably clever.  To DePalma's credit, this change to the narrative could offer up a haunting final note.  Sadly the film then botches this decent ending with ten tacked on minutes of nonsense that are DePalma's other major contribution to the narrative, the rest of which is almost word for word the same as the original film. Outside of those ten minutes and the sometimes striking design, however, Passion is a dead loss on pretty much every level.  Part of the problem lies with Love Crime which, bluntly, just wasn't much good to begin with, and which DePalma has stuck to closely enough to give original screenwriter Natalie Carter an additional dialogue credit.

Perhaps the biggest problem comes in DePalma's most fundamental choice: the casting.  Rachel McAdams is an appealing screen presence, but I'm yet to see any real evidence that she's a great actress and while she can certainly play a comedy bitch (who doesn't love Mean Girls?) she seems unlikely casting as an icy and ruthless executive.  Passion demonstrates that there's a reason you don't think of McAdams for that part: she is dreadful in it.  Honestly I can't blame her, in fact I feel rather sorry for her, she's totally out of her depth in a part she's utterly unsuited to, fifteen years too young for and must battle some truly abysmal dialogue into the bargain ('How about you call me never?').

If you were going to go younger (Kristin Scott-Thomas played it in the original film) with the part of Christine, you could have done a lot worse than Noomi Rapace, who brought the emotionally isolated Lisbeth Salander to life in the original Swedish film of The Girl With The Dragon Tattoo.  Unfortunately she's playing the much more passive and meek Isabelle and while this casting, given the way the part evolves, is less catastrophic than McAdams' it's also terribly misconceived and plays to the weaknesses of a fine actress.  Rapace isn't as extravagantly bad as McAdams, but I've never seen her so flat, so devoid of energy.  In her best roles (Daisy Diamond, Babycall, Dragon Tattoo) Rapace pulls off the illusion of not appearing to act.  Here it doesn't feel like an illusion.  Maybe it's the language issue or maybe this really was just a paycheque job, but either way her performance leaps off the screen in waves of sheer apathy. 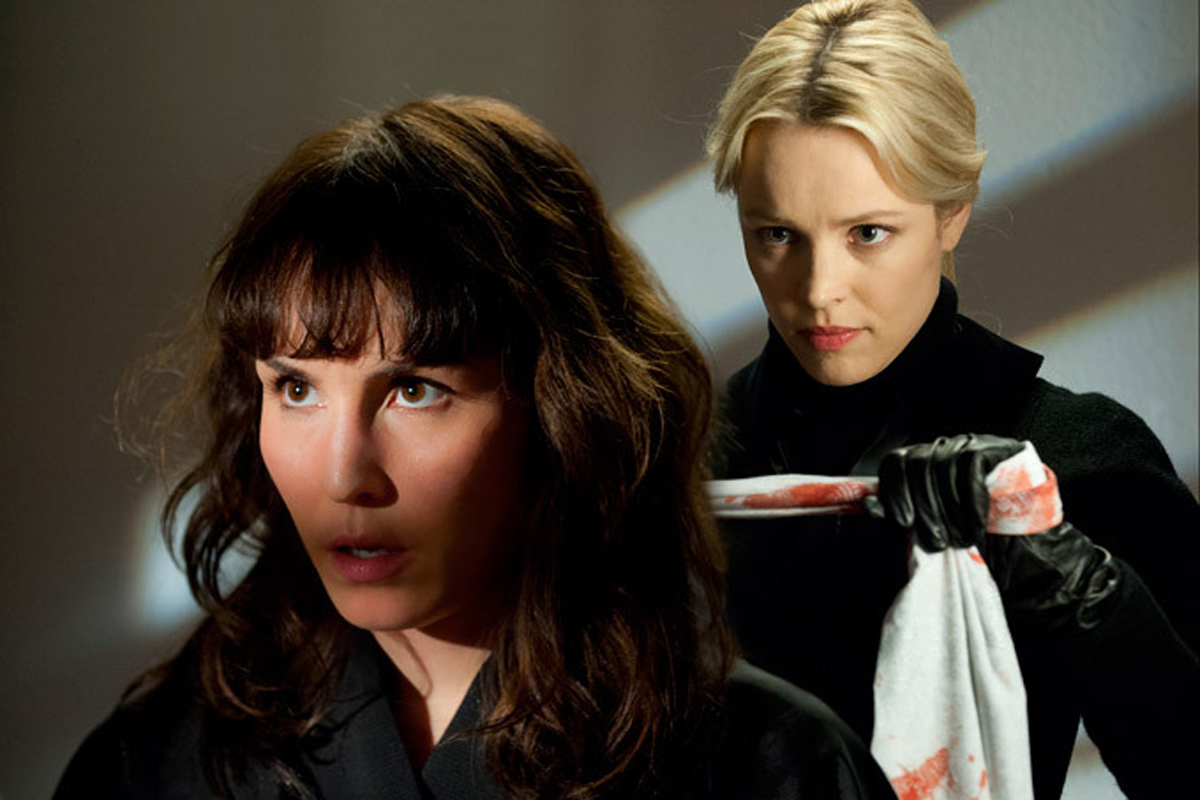 The supporting cast is small but, impressively, manages to contain a performance that is worse than McAdams' turn.  I was counting, and I'm not sure Paul Anderson, as Dirk, says one sentence in a way that doesn't feel like he's in a terrible audition.  With every scene he seems to manage to lurch to a less impressive place with his performance.  On the other hand, Karoline Herfurth, who I've liked since seeing her in German coming of age film Big Girls Don't Cry, manages to pull out the only impressive performance in the film, she has little to do for much of the running time, but impresses in those ten good minutes at the end of the film, and she, at least, is appropriately cast as the assistant looking to move up in the company and in love with her boss, Isabelle.

Those who like the film seem more convinced by the latter tone, but because it is so inconsistent I was never convinced that the hint of parody was intentional.  Even if it is, it still doesn't work, first because DePalma doesn't seem to be committed to it and secondly because as parody goes it hews so close to what it is ostensibly commenting on that it seems not to joke about low rent erotic thrillers as unintentionally become one.  DePalma also falls into this trap, for me, with his most notably auteurist moment; a split screen sequence that shows a ballet on one side of the screen and a shower scene on the other, yes, I get the point he's making, and it does pay off, but it's so much a DePalma trademark that it no longer feels clever or inventive, and like much of the rest of the film it's so overblown it teeters on parody, without ever being funny.

If you attempt to take the film seriously then it really falls flat on its face, first with the overblown stylistic tics, such as a ten-minute sequence which is shot completely through a blue filter at canted angles (shades of Battlefield: Earth in the persistence of those angle choices) in a hamfisted attempt to make you question whether you're watching a dream sequence and then also because of all the other problems; the script, the acting, the off balance tone.

Passion is a misfire on every level.  It takes a film that was less than great to begin with and makes it worse by completely miscasting it and by seeming to have no idea of which of several films it wants to be.  Ultimately this failure to choose a clear tonal direction means that Passion hits a dead end down every road it attempts to travel.  It's a dreadful film, and one that says to me that Brian DePalma's powers really have finally deserted him, because if there was ever a project that should have brought him back to form then it was this one.
★★☆☆☆
Posted by Sam Inglis at 20:52