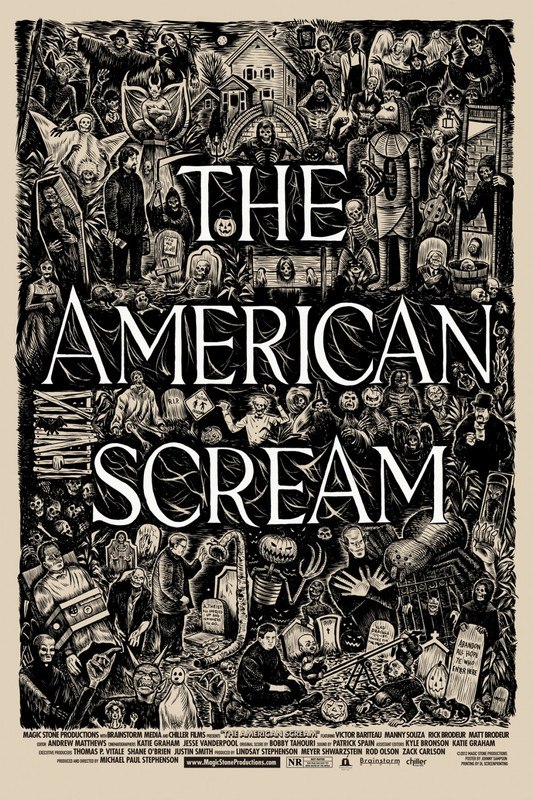 Halloween was not a big thing in the UK when I was growing up.  I didn't go trick or treating, we didn't carve pumpkins and neither we nor anyone we knew ever decided to spend much of the year in the run up to Halloween designing and building haunted houses in our back gardens for people to spend Halloween night walking through and being scared.  Now, having seen The American Scream, I think we missed out.

Michael Paul Stephenson's documentary follows three home haunters from the same town; Victor, Manny and Matthew and their families in anticipation of the big night, as they prepare their haunts for the Halloween crowds.  For me, the heart of the film is with Victor and his family.  Victor longs to go professional and is clearly obsessive about his haunts to the point of testing his relationship with his wife and kids every October, but there is still such warmth about their interaction.  Especially charming is a moment towards the end when Victor's elder daughter, who is about nine, has designed a prop for him to make and he admiringly tells her "you're a sick little girl, you know that?"  In that moment, as well as in the Halloween night culmination of all the work on the various haunts I really felt what seems to me the theme of the film; the way that horror can bring people together in a shared cathartic experience of being scared and enjoying being scared.

While I enjoyed the whole film, and there are especially funny and sweet moments to be seen between Matthew and his rather infirm Dad (especially when they go and do their clown act at a local hospital), I did ultimately end up feeling that Victor and his family, who get the bulk of the screen time, could have supported a film all by themselves.  Still, it was nice to see both the difference between Victor's incredibly professional haunt and Matthew's much more slapdash effort, and the fact that both were seemingly enjoyed by everyone who visited.

Overall, The American Scream is a warm and funny film about the art of scaring people, and it was a great kick off for my first horror film festival.
★★★★☆ 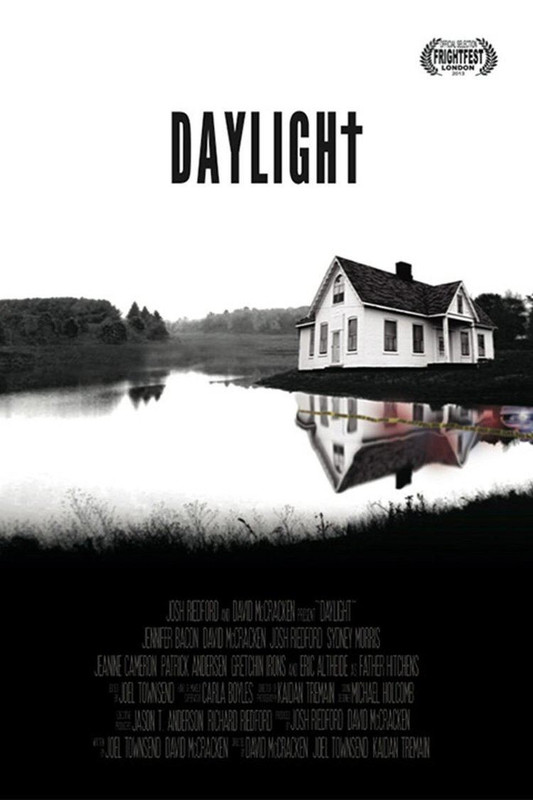 You can tell while watching it that Daylight has three directors.  That isn't necessarily a problem, after all, Airplane! is a pretty great movie, but there are always likely to be pitfalls when three people - all of whom ostensibly share creative control - are trying to put their ideas into a single 90 minute basket.  Daylight is jam packed with ideas; there is the down to earth horror of real life, possession, childhood trauma, exorcism, surrealism, and this is exactly the problem.  The film never manages to coalesce around a single idea, instead shooting off in all directions as takes its fancy, all of it filtered through perhaps the most obnoxious use of the found footage gimmick I've ever seen.

To be fair to Daylight it starts out potentially interesting, focusing on three child support workers (one of whom, for some reason, films everything) investigating statements made in a teenager's diary which imply that her priest may be abusing her.  There is a creepy plausibility to this section of the film, but it quickly goes off the rails as the focus moves to another family whose nine-year-old daughter the group begin to suspect is possessed.  Throughout, directors McCracken, Townsend and Tremain attempt to convince us that we're watching a degraded videotape (on file as Police evidence) by putting as many technical flaws into the picture as they can; tracking goes out regularly; the top of the image is often seen at the bottom of the screen and the quality in general is abysmal.  Verisimilitude is one thing, but honestly, I have long play VHS tapes 15 years old that hold up better than this, and put together with the endless judder in the frame, even in the infrequent sedate moments, it's almost unwatchable.

The more down to earth portions of the film and the illusion of the found footage conceit are not aided by a collection of extremely rote performances.  It's sometimes hard to define what makes a performance good or bad, but in this case they just feel off; there's an unnatural affectless quality that simply rings false to me.  You can sometimes get away with acting that feels like acting, but not when we're supposedly seeing 'real life' footage.

The killer, however, is the last ten minutes.  Daylight had gone off the rails long before this point, but the last ten minutes are when it chucked every single idea it had at the screen in a desperate attempt to get something, anything, to stick.  Nothing did, except an escalating sense of having wasted my time.
★☆☆☆☆ 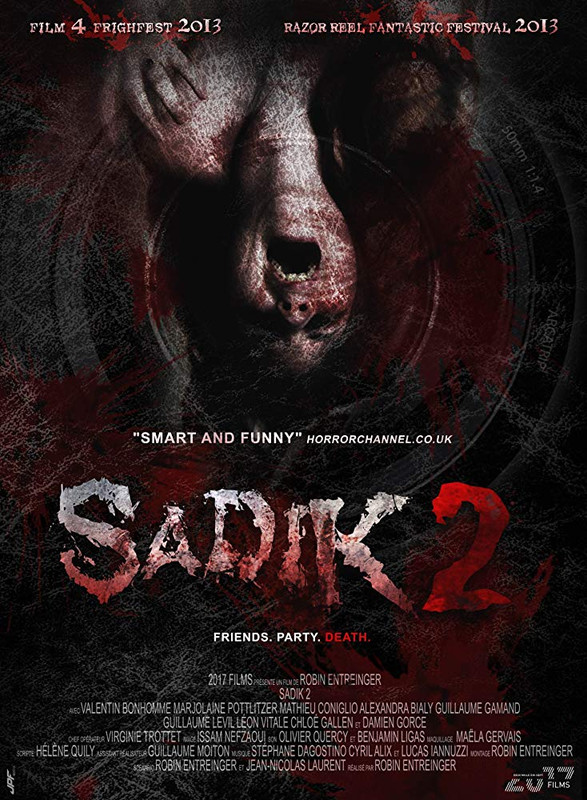 Sadik 2 (which, by the way, is not a sequel) divides its 75 minutes into two distinct halves.  The first sees a group of friends arriving, as they apparently always do, to spend New Year's Eve getting drunk together in a remote cabin.  The film spends a lot of times on the various crushes that exist in the group, on the filmmaking ambitions of one of the characters and on their shared history living in a children's home.  This would be fine except for two things.  First of all, we all know this is a horror film, but in this character heavy first half, there is little sense of build to becoming that horror film, aside from the premise of six people in a remote cabin.  However, more problematic is the fact that not one single solitary moment of the character development pays off in any way during the horror driven second half.  For all the time that Robin Entreinger spends on ostensibly setting these people up, come the kills they are still used as nothing more than meat bags.

This is a terrible pity because when we see the horror concept behind the film it is actually very clever; a sort of down to earth indie spin on Cabin in the Woods.  The kill scenes are really well done, the effects are largely kept off-screen, but those we do see are impressive for the budget (especially a face being peeled) and there is a great balance between genuinely nasty imagery, a sense of terror and some pointed and knowledgeable genre satire.

If Sadik 2 were a short, the opening 40 minutes trimmed down to 10, then the emptiness of the characters would likely not be an issue, indeed it might even make a satirical point.  As it is the film, while it promises interesting things from Entreinger in the future, is outrageously padded and too bogged down by a first half that never pays off to end up being truly effective
★★☆☆☆