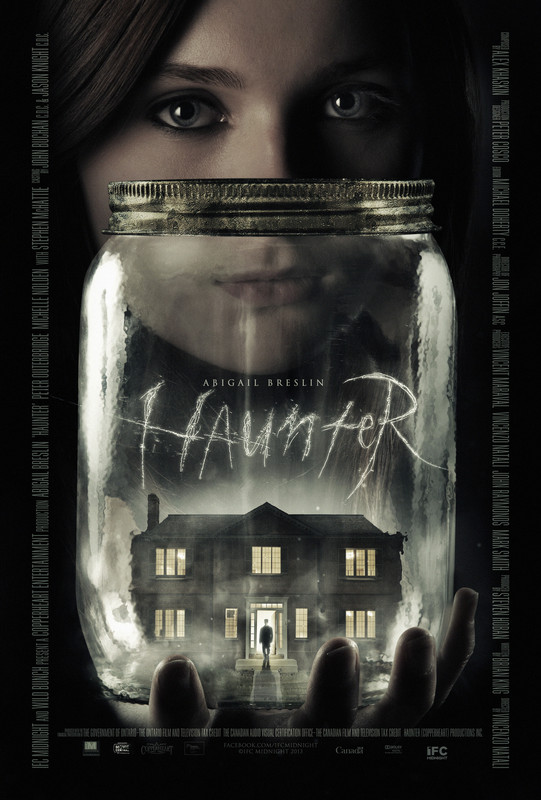 I can't tell you how tired I am of a certain kind of horror film that I call the 'noises off' movie.  You know the one - or rather the several thousand - where all the 'scares' come from things going bump just offscreen and, usually, something popping up suddenly in the background of a shot.  As Haunter opened it looked like it was simply going to be that; one more ghost story full of offscreen noises, but then the film began to evolve, and became something rather more interesting.

Vincenzo Natali's latest starts out with a simple concept, it's the day before Lisa's (Abigail Breslin) 16th birthday, and everything seems normal except that she's not allowed go about because of a thick fog outside.  It soon becomes clear that it has been the day before Lisa's 16th birthday for some time, but that only she is aware that time is looping.  As Lisa begins to investigate what is happening the events of the day begin to change, in small ways to begin with, but then in more disturbing ways.

It's not easy to talk about Haunter.  It draws on a lot of familiar reference points, but even to mention many of them would be to spoil the film, and the strength of the screenplay, in particular, lies in the fact that while it trades in tropes that you'll have seen in haunted house films, serial killer films and other types of horror, one of the thrills of the film is that it combines and twists them in surprising ways.

What can be mentioned is the fact that Abigail Breslin, who I'm not sure I've seen in anything since Little Miss Sunshine, has a really strong role here; an inquisitive, proactive, brave and reasonably complex character, and she does a great deal with it.  A large part of why Haunter works so well is that Breslin makes Lisa relatable despite her situation and is generally an appealing presence.

Credit must also go to Vincenzo Natali, who takes what could be a patchwork of influences and links them all together in a way that creates a look and mood that, while not entirely original, is consistent and gives the entire film a creepy undertone that serves it extremely well as it moves from twist to twist.  Even when Haunter trades in cliche - as in the early things going bump in the might scenes - Natali's craft and Breslin's sympathetic performance wring effective scares from what could just be another genre workout.

For me, Haunter is one of the best mainstream horror films I've seen for some time.  I wish I could get more in depth with this review but trust me, after you see it you'll thank me for keeping things vague.
★★★★☆ 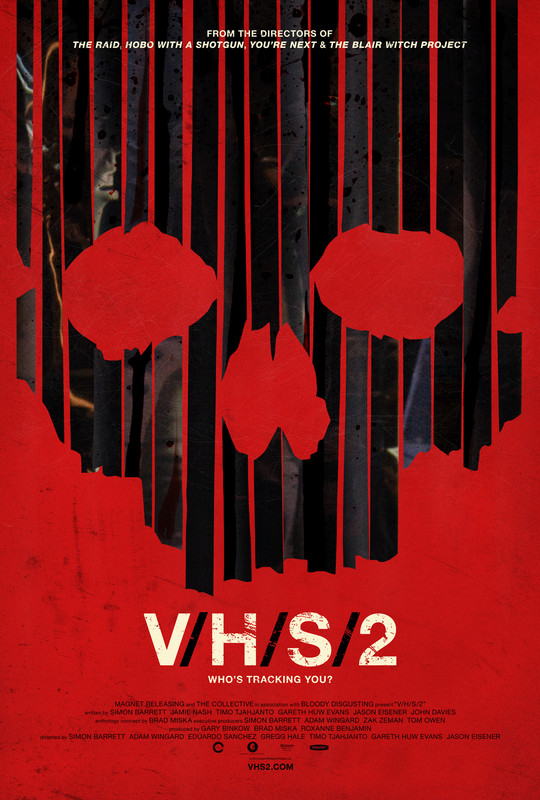 Portmanteau films are, I think, damned by their very nature to be hit and miss, and V/H/S/2 is no exception.  Composed of a wraparound story that shows the discovery of some mysterious videotapes in an empty (or is it?) apartment and four POV horror short films contained on those tapes, the film dips into many horror subgenres and does so with mixed success.

Everyone is likely to find their own standouts, but outside of the wraparound (which is middling) I found two shorts that I really liked and two that I was much less keen on.  Interestingly both of the films I enjoyed were collaboratively directed.  The first was Eduardo Sanchez and Gregg Hale's fast moving zombie comedy A Ride in the Park, which is a gleefully gory tale of a cyclist bitten by zombie, going on to bite a couple and attacking a birthday party.  It's simple, but full of fun details and big laughs and shows that Sanchez can do tongue in cheek horror as well as the straight up scares he supplied in Lovely Molly.

More substantial in theme and running time is Gareth Huw Evans and Timo Tjahjanto's extravagantly bloody Safe Haven; a story of filmmakers whose documentary about a cult leader doesn't end the way they expected.  Evans and Tjahjanto take more time to set up characters, which means that when they spring a mid-segment surprise it has a bit of resonance, and they also have the time and restraint to set up a creepily disconnected atmosphere in the cult headquarters.  Evans bends his action credentials brilliantly to the mayhem of the film's last third, which is jam packed with twisted ideas and moments, leading up to a very funny last line.  The change of tone is nicely handled, going from restrained and tense to exuberantly over the top in minutes and with total assurance.

Unfortunately, these films account for less than half of V/H/S/2's running time, and the rest is filled by Adam Wingard's obvious jump scare packed Phase 1 Clinical Trials and Jason Eisener's cheap looking and as lazy as its title suggests Slumber Party Alien Abduction.  I get that this is the nature of these films, and V/H/S/2 is better than most and has two really great segments, but I can't help feeling they would ultimately make better DVD extras on the respective director's features.  On the whole, there is fun to be had here, but it's hard to recommend V/H/S/2 as a whole.
★★★☆☆ 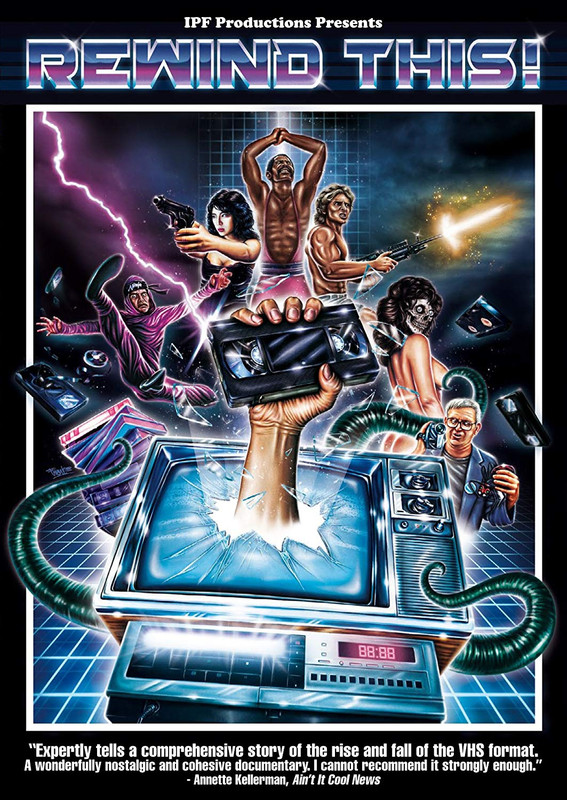 Being in my early thirties, I am very much of the VHS generation.  DVD only came on the scene when I was about seventeen, and it was a few years before I got a player.  I very much grew up and educated myself as a movie fan with the help of VHS, and while I don't miss some of the technical aspects of the format I do still have a nostalgic soft spot for it.  All of which makes me the perfect audience for Rewind This; a documentary that takes a scattershot but extremely entertaining look at the format and the revival it has recently seen with collectors.

If you are a fan of VHS exclusive cheese, this is the movie for you.  Sprinkled throughout are clips from some fantastically entertaining and offbeat looking titles (one that sticks in the mind is Bubba Smith's hilarious workout video, which begins with him telling you he loves you), I'd seriously recommend taking a notebook into any screening so you can remember all the films you'll want to track down.

Outside of this, the film moves quickly through various topics related to videotapes, providing an overview of the format wars before focusing on VHS and the nostalgia that collectors have for the format.  The film is especially good at covering the sheer extent of the VHS library, and how the astonishing popularity of video and the slowness of the studios in catching on to it created a whole new market in which independent filmmaker like Lloyd Kaufman, Charles Band and Frank Henenlotter (all interviewed) could thrive.

There is a real joy - and envy - as a film lover who has over 4000 titles, but only about 400 on VHS, in seeing the many different collections displayed and the different ways they are organised (I especially liked an obsessive horror fan's 'Pre-Sellout Craven' section).

Rewind This spends a lot of time talking to fans and collectors, but it also looks at how video affected filmmakers and distributors.  The interviews are all very informative, and the informality of them makes this an easily engaging watch as well as an endlessly informative one.

There are only two downsides to the film.  First is that it does sometimes ping pong between topics very quickly, and it can feel like some sections (on adult video, for instance) could either be longer or left out so something else could be longer.  Also the US-centric approach of much of the film means that it barely addresses the moral panics that surrounded video here in the UK in the 80's and 90's, which are such a large part of the story of the format.

Rewind This is a film by, about and for film fanatics, and if you grew up with the format as I did it will likely prompt all sorts of nostalgic feelings and a desire to pull a big box ex-rental tape down off the shelf.
★★★★☆
Posted by Sam Inglis at 15:42