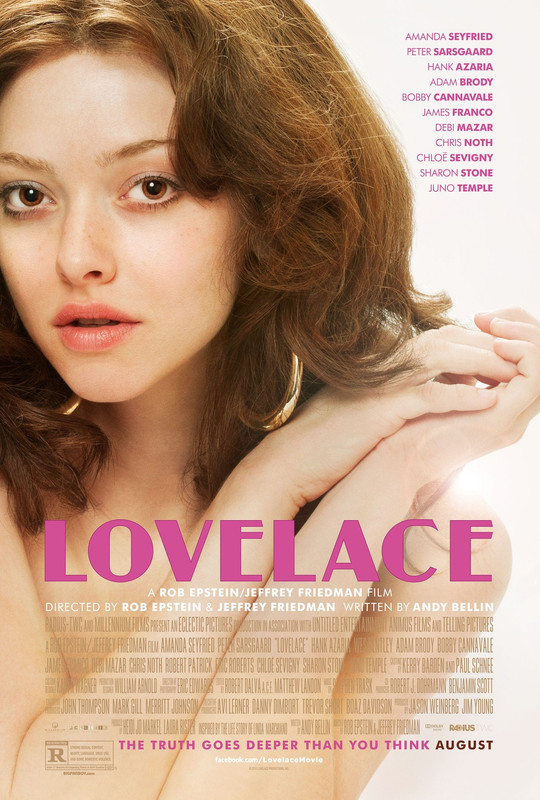 There are two narratives about the life of Linda Lovelace (here played by Amanda Seyfried), and since both were at some point aggressively promoted by Lovelace herself it is difficult to know which is more credible.  Rob Epstein and Jeffrey Freidman's film certainly knows which story it believes, but it also seems to recognise the difficulty of reconciling the two sides of the story it instead presents them back to back, with the story rewinding at a certain point to show the other side of events we've already seen.

In the first half of the film we see that Linda Boreman is a pretty 21-year-old living a reasonably sheltered life with her parents (Sharon Stone and Robert Patrick).  One day she meets and falls for the much older Chuck Traynor (Peter Sarsgaard).  Linda and Chuck are soon married, but they have serious money problems and in order to solve them Linda agrees to be in a porn film that will show off a special talent she has developed.  That film is Deep Throat, and it makes Linda an overnight star as Linda Lovelace.  In the second half of the film we see these events again, but with a darker side visible.  There are skeletons in the closet of Linda's relationship with her mother.  We see the abuse that is present in Linda and Chuck's marriage from the beginning, the coercion that he exercises to get her into sex work and her attempts to leave him.

Lovelace tells an interesting story and goes about it in a way that is different from other biopics and reflects well the particular challenges of presenting this life in a film.  Overall it boasts quality parts, but there are also problems that dog the film, making it difficult to embrace as a whole.

Amanda Seyfried represents both the best and the worst aspects of the film.  She's good as Linda, and sympathetically puts across her naivete and her reluctance once she's involved in the porn world (hard as it is to take that at face value if you know what the film leaves out).  On the other hand, Seyfried looks absolutely nothing like Linda Lovelace, and putting a frizzy 70's wig on her helps the illusion about as much as painting a greasepaint mustache on me would make me look like Groucho Marx.  This wouldn't matter so much if Lovelace's looks were not so much part of her trade in the film.  Lovelace was notable - outside of her oral talents - for her plain, girl next door look and slender, small chested, body.  It is distracting how little of this Seyfried manages.  Try as she might, she's not plain looking (in fact she looks much more the stereotypical pornstar than Lovelace did) and her body, despite a diet that she has complained reduced her bust size, also looks nothing like Lovelace's.  Were the script or the performance brilliant this might all matter less, but both of those things tend much more toward simple adequacy.

Peter Sarsgaard is a great actor, but he excels at playing bastards, and Chuck Traynor certainly gave him plenty to work with.  Right from the off he suggests something untrustworthy behind the outwardly sweet and smooth guy that Linda falls for.  This is something he shows really well as, over dinner, he manipulates Linda's parents into liking him.  Chuck is too one note to be the film's most interesting personality, but Sarsgaard makes him fascinating, if in no way relatable or sympathetic.

The other supporting performances tend to be broad, whether it's Sharon Stone as Linda's stern mother, Hank Azaria as Deep Throat director Gerard Damiano, an entertaining performance as a man stuck somewhere between sleaze and art or Adam Brody, who has an absolutely brilliant time playing Linda's co-star Harry Reems, and is hilariously funny in the scenes that recreate Deep Throat.  Stuck with disappointingly little to do is the brilliant young British actress Juno Temple, playing a friend of Linda's.  Temple wouldn't be terribly notable here, except that there is a sense that she would have made a much more interesting choice as Linda Lovelace, given her daring as an actress and her (somewhat) closer resemblance to Linda.  A little nuance comes from Robert Patrick, who stands out in a scene where, over the phone, he tells Linda that he saw her movie.  This is also Seyfried's best scene, the mix of emotions quite raw on her face and in her voice. 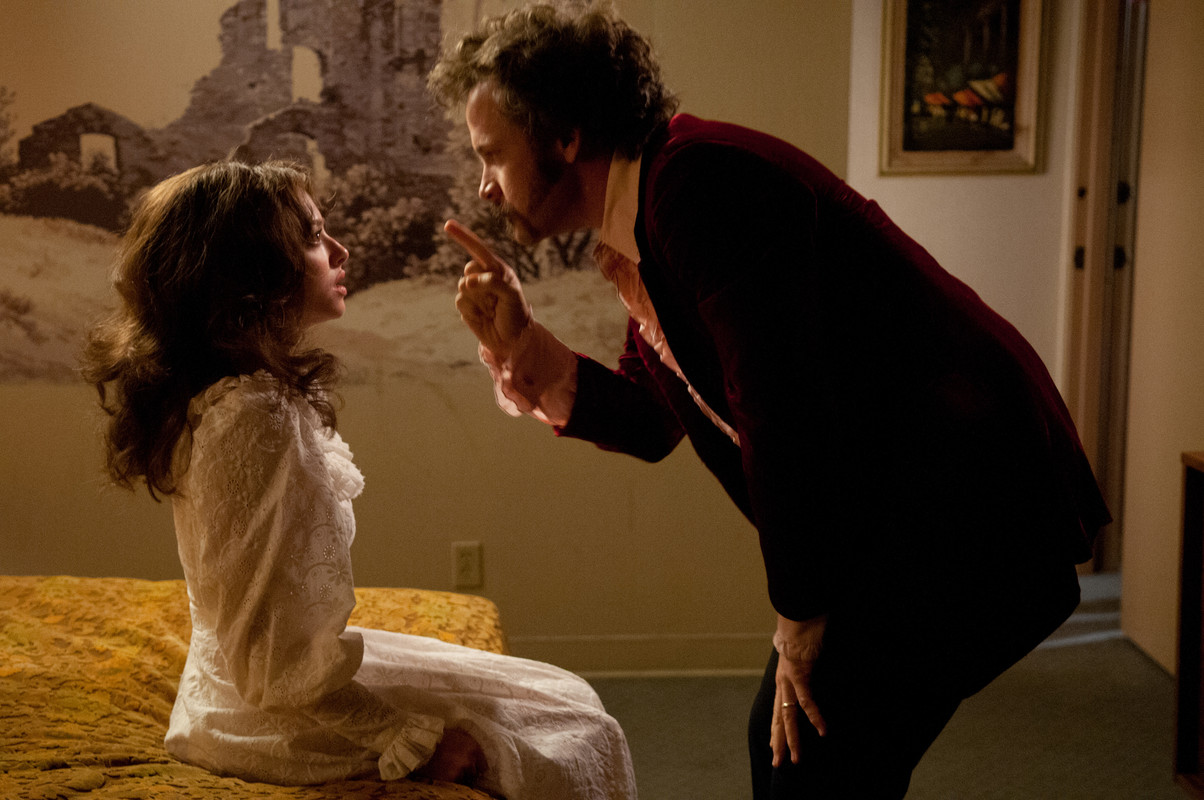 While their structural ideas are interesting, Rob Epstein and Jeffrey Friedman otherwise struggle for a sense of directorial identity.  The scenes recreating the shoot of Deep Throat have a cut rate Boogie Nights feel to them, and there is little invention in framing, editing or look to enliven the film.  The period detail also feels rather like a surface gloss on the film; as if everyone is playing extremely harrowing 70's dress up.

Somewhere between this film, the footage on the cutting room floor, the script and the life of Linda Boreman there is likely a great film.  Brief glimpses of it peek through here, but on the whole that isn't the film up on the screen.  It's certainly a harrowing and sometimes well acted piece, but indifferent direction, a rushed - if original - structure and a somewhat miscast lead regularly derail the film.
★★☆☆☆
Posted by Sam Inglis at 16:10