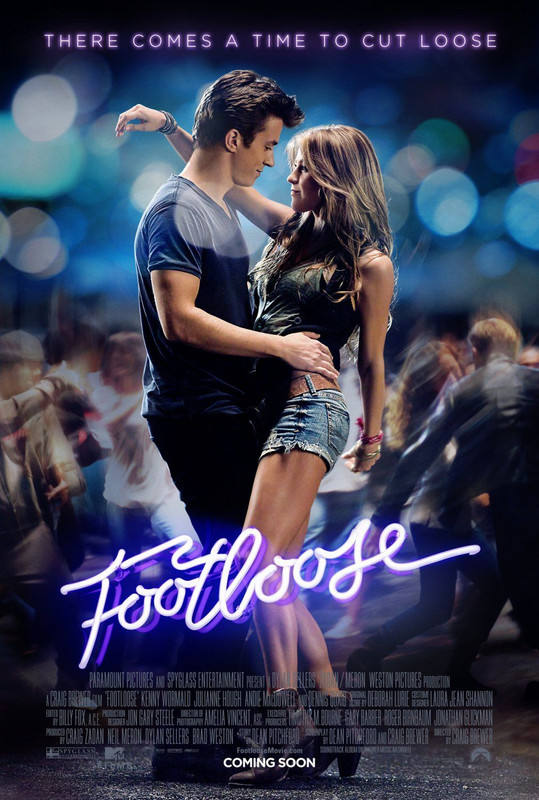 Remakes, one of several crutches on which Hollywood is currently propping itself up. It seems as though any film with a slightly recognisable name can now be reconfigured for a modern audience and let's just say that the resulting films haven't always been noted for being better than those they're inspired by. Footloose is an interesting choice for dusting off. In some ways it makes perfect sense. The High School Musical and Step Up films showed that a young audience has an appetite for seeing dance on the big screen and both music and dance have moved on significantly enough since 1984 that the film's big moments could avoid repeating those of the earlier version. On the other hand, does the story make sense in a modern context?

To its credit, the film works hard to lend some credibility to the idea that in 2011 there would be an American town that outlaws public dancing. The car accident that closes the film's exuberant opening credits is a shocking moment and it's not that much of a stretch to see a town whose lawmakers are especially conservative react to it with legislation that is both draconian and missing the mark in terms of what was actually to blame for that accident. You make the choice to go with it or not, if you can this version of Footloose has its rewards.

The basic story still sees rebellious teen Ren McCormack (Kenny Wormald) coming to town and butting heads with local preacher Rev. Moore (Dennis Quaid) over both the law against dancing and the fact that Moore's daughter Ariel (Julianne Hough) is showing a lot of interest in this boy from out of town. The characters are rather basically sketched, there are a lot of Hicksville stereotypes, including Miles Teller in Chris Penn's role as Ren's friend who does not dance and Patrick John Flueger as a woefully broad asshole boyfriend that we all know Ariel will leave for Ren. There's also a thin role for Andie MacDowell as Quaid's wife. Even if you've not seen the original you know where this is going: Ren will get the girl and get the town dancing, it's really about execution and on that front there's good news and bad.

There is a gaping hole at the centre of this version of Footloose. Kevin Bacon was nobody's idea of a great dancer, but he is a great actor and more than that, simply by dint of his unique look, he's an interesting and memorable presence. Kenny Wormald is a very, very good dancer. How good? He used to be a backing dancer for Justin Timberlake. Unfortunately he looks like he rolled off the production line in a factory where Hollywood makes cute guys you can't tell apart. His acting doesn't help. It's not that he's bad, he's just clearly not been cast as an actor first and his work is flat and bland. This bites hardest when Ren goes up against the town council. When he should be fired up and getting the crowd, if not the council, behind him, Wormald just doesn't have the presence to pull it off.

I can't help but feel that Miles Teller, who is able to carry himself on screen with an arrogance that would work for the way Ren initially looks at this hick town he's ended up in, and who is a proper actor, would have made for a better lead. He's clearly not the dancer Wormald is, but he acquits himself well enough in the last number that it seems likely he could have picked up those skills. As it is, Teller is in appealing mode here and he has fun, making an appropriate analogue for Chris Penn.

As with Wormald, you suspect that Dancing With The Stars pro (and now judge) Julianne Hough was cast for her dance background and small town Barbie look rather than strictly for her acting, but she does more than Wormald can with a thinner part. When there's finally a proper dramatic note for her to play, Hough is pretty good as Ariel confronts her Father, in his church, after she's been assaulted by her now ex boyfriend. Dennis Quaid is one of the better things here on an acting level. He's got a sliminess to go along with his charm that suits this part well. You can believe him as a preacher and as convincing speaker on the town council. He's one of the things that makes the anti dancing law feel somewhat plausible, because you can see how he could talk people round to his rationale for it. The character is on the two dimensional side, but Quaid is always worth watching.

The dancing, more than any of the actors, is the star of the film and Craig Brewer gives those moments prominence and makes each feel a little bit different. There's hip hop dancing in an early scene where Ren and Ariel first spot each other, line dancing at a club and Ren has a contemporary number when he's trying to get out his frustrations. It's all well executed, impressively choreographed and entertaining. Wormald and Hough both communicate as much character through their dance numbers as they do through any dialogue, more in Wormald's case.

Footloose is a pretty middle of the road film, slightly less interesting than the original as a piece of drama but probably better if you're coming to it purely for the dancing and the music. It can stand relatively well alongside the 1984 film, but I'm not sure its generation will end up holding it in quite the nostalgic glow the original has around it.
★★★ 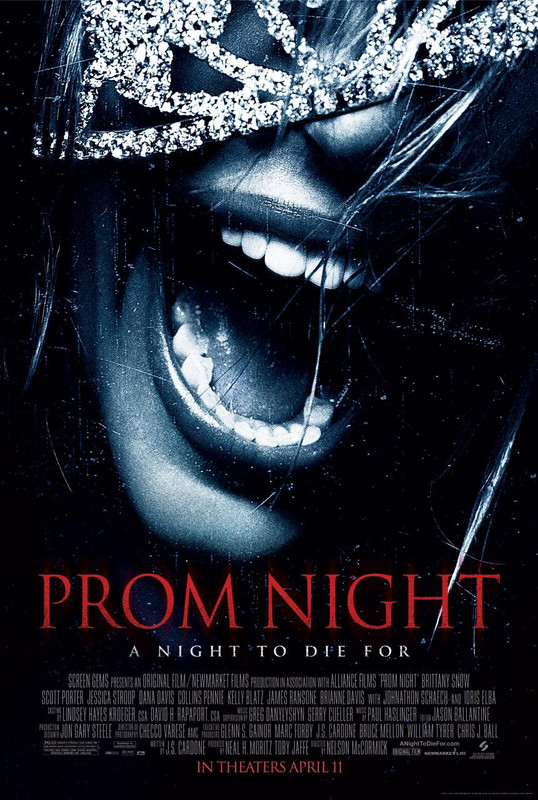 The slasher often seems seems the laziest of sub-genres. Get a bunch of attractive young people, put them in an isolating situation, add someone with a signature weapon (mask optional, but encouraged) and stretch as hard as you can until you reach 85-90 minutes. Job done. Perhaps lazier still is the slasher remake. The groundwork has been done, the situation exists and, depending how faithful you are being, so do many characters and even specific sequences. A remake in name only, Prom Night relies on its source film less than many, but make no mistake it remains a profoundly and painfully lazy enterprise.

The film opens with a flashback to three years previously when a teacher (Jonathan Scheach) with an obsession with one of his students (Donna, played by Brittany Snow) murdered her entire family. The rest of the movie takes place on prom night, during which Donna's teacher escapes the asylum he's been confined to and plans to kidnap her from her prom. I'd have warned you of spoilers at the top of that paragraph but for two things: first, I would heartily discourage you from seeing this piece of shit and second, the blurb on the blu ray box also tells you the entire story, if they don't care why should I?

It's not necessarily the worst idea for a slasher to tell us who the killer is upfront. Genre classics like Halloween and A Nightmare on Elm Street don't trade on mystery, but they have killers who are terrifying and characters around them who are interesting, to say nothing of masterful, visionary filmmakers behind the cameras. Prom Night 2008 has a collection of pretty young ciphers and Nelson McCormick, a TV director making an almost determinedly anonymous feature début.

The screenplay by J.S. Cardone, whose own first directorial feature The Slayer featured on the Video Nasties list back in the 80s, is terrible in every respect. The characters barely deserve that designation. Often in teen movies characters have to make do with traits (the Jock, the Bitch, the Brain etc) rather than full personalities. Cardone doesn't even grant his characters that. Brittany Snow's Donna is blonde. Her friends Claire (Jessica Stroup) and Lisa (Dana Davis) are brunette and African American respectively. Lisa's eye for men (“one of 'em was knida cute” she says when a group of men in their 30s or 40s hits on them) is the only thing I can remember as a defining trait for any of them. Donna is perhaps especially bland, and she's supposed to be our Final Girl. The supporting cast; the girls' boyfriends, Idris Elba as Detective Exposition and Jonathan Scheach as the murderous teacher, are no further developed.

Cardone has one early idea that, while not overly original, might enliven proceedings. Donna is supposed to be traumatised by her experiences and is on anxiety medication. Just before she goes to prom we discover that she has been off her meds for a week. This could easily have been exploited to good effect: an anxiety ridden Donna, having actually seen her teacher, trying to convince her friends – who know her history – that he's really there and it's not the lack of pills talking. Cardone and McCormick could also have used this to create a sense of uncertainty in the audience, but this information is forgotten and swept under the carpet the second it's revealed.

As director, Nelson McCormick seems to go page by page through The Complete Hack's Guide To Making Your First Horror Movie. There are several jump scares in mirrors, two dream sequences, a series of repetitive, boringly shot murders and several iterations of the pulling back the shower curtain scare. This film could have been made by AI if you'd fed it the most repeated moments from the last 30 years of slasher movies.

The acting is bad, though perhaps not entirely the fault of the cast. Brittany Snow could have suggested her character's heightened anxiety, making something of the dropped plot point about Donna's meds, even if Cardone and McCormick forgot about it. Unfortunately this eludes her, as does any semblance of personality or much in the way of expression. Idris Elba is clearly paying his rent. He contributes a solid accent and says his dialogue out loud. The rest of the cast don't have to do accents, but manage the saying things out loud part of the equation.

There wasn't much here for anyone to work with in order to turn in a good performance, but surely Jonathan Scheach should at least be able to seem creepy. He doesn't. We barely see him interact with Brittany Snow. His obsession isn't a strong thread at all. We should be feeling him in every shot, but instead he spends most of the film confined to the upstairs of the hotel where the prom is happening, pointlessly knocking supporting players off, which makes zero sense if we're to believe his objectives and that he has a plan to kidnap Donna.

Prom Night 2008 is an excruciatingly dull film. It pales next to its much more inventive source (and even more so next to the hugely fun, initially unrelated, sequel Hello Mary Lou: Prom Night 2). It's poorly directed and written, and acted by a near comatose cast. The audience will be in the same state by the end of this cinematic anesthetic.
★
Posted by Sam Inglis at 10:12