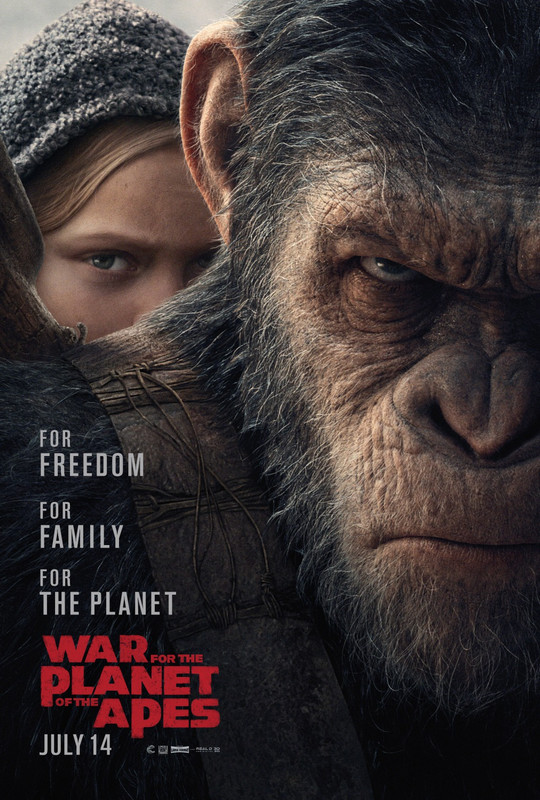 Blockbuster cinema has been in something of a rut for some time now. It has often seemed that, generally speaking, the higher a film's budget was allowed to climb the lower its IQ would sink in response. The Planet Of The Apes series has always been an uncommonly smart one for blockbuster cinema. The original series was rich in political allegory, using that to remain both relevant and interesting as the budgets sank and the films could no longer trade on the first film's remarkable make up. Tim Burton's remake was a stumble, but the rebooted series begun with Rise Of The Planet Of The Apes was a grounded reinterpretation with big ideas, which then expanded into Dawn Of The Planet Of The Apes, a step up in quality from a strong first installment.

War For The Planet Of The Apes picks up not long after Dawn left off, with Caesar (Andy Serkis) and his clan now hunted by human forces led by a fanatical Colonel (Woody Harrelson). After his wife and elder son are killed by the Colonel and his forces, Caesar and his closest associates set out for revenge, while sending the rest of the apes on a journey to a new home. On their journey, the apes are captured and Caesar must re-evaluate his priorities.

The first warning sign that War For The Planet Of The Apes might not be the equal of its predecessor comes with its opening image; a blurry forest over which expository text is superimposed. Compared to the montage that filled in the plot at the beginning of Dawn, and that film's opening close up of Caesar's eyes, pulling out to reveal him in battle make up, this feels graceless and underwhelming. The action scene it evolves into isn't bad, but does feature the first of quite a few instances of unconvincing CGI in the film. You can almost hear the computers wheeze during the frequent appearances of massed ranks of apes on the screen.

Both Rise and Dawn were notable for the amount of mileage and expression they got from Andy Serkis' reticent performance as Caesar. It was one of the first and only instances in which the uncanny valley effect went away and allowed me to accept a CGI character as real in a film that wasn't entirely computer generated. Some of this is still true in War. Serkis remains a remarkably effective physical actor and the technology still brings Caesar vividly to life. The problem is that Caesar now talks a lot, and with a great deal more ease than in the previous films. In Dawn, while there was a fair amount of dialogue, Caesar chose the moments he actually spoke very carefully. It always felt like an effort as well, as if the words had to be squeezed from from deep part of his mind. This time, Caesar's words come more fluently, in what feels like a big jump in the relatively short time since the last film – one we don't see in the other ape characters around him. What's more galling though is the fact that Caesar now seems to speak even when he doesn't need to and that he often has to deliver a dump of exposition (which makes up most of the film's dialogue).

This is a problem on two levels, first it makes the film feel much more conventional. The second problem is more fundamental. Andy Serkis just isn't as good at delivering dialogue as he is at physical performance. With more speaking to do the illusion of the performance capture is broken much more frequently. Serkis can be heard more clearly in Caesar's now easier speech and at times it is like watching an overlay, rather than the complete performance of the previous two films. This is even more true of Steve Zahn's irksome performance as Bad Ape, a new character who helps Caesar, Rocket and Maurice find the compound where their friends are captive.

Among the human characters, Woody Harrelson does a typically solid job as the Colonel, and manages to makes something resonant of the huge and unwieldy infodump in which he explains his motivations to Caesar, but outside of that scene there's not much dimension to the character. More problematic is Nova (Amiah Miller), a mute girl of about 11 who Maurice insists the apes take with them, after Caesar is forced to kill her father. It's not Miller's fault, but the wide-eyed, open mouthed performance she's been directed into contributes almost nothing to the film. It's the shallowest, most manipulative way possible to try to wring emotion from us. It doesn't even manage that, as the character feels so shallow, so nakedly a prop.

At 140 minutes the film is overlong and often both slow and tedious. Consider the title War For The Planet Of The Apes. That implies high stakes – war for the planet itself – but we never feel that. If anything the battles of Dawn, both with the humans who were scratching for survival and within the ape community for control over the direction of leadership was much more consequential than what we get here, which boils down to the apes being caught between two largely faceless groups of humans, one of which appears almost literally out of nowhere. This film may nod to a lot of war movies ('Apepocalypse Now' graffiti. Droll.) but it isn't one itself. The idea of Caesar as a general was much more developed in Dawn, even in Rise. The 'battle' is underwhelming at best, and comes only after two hours largely dominated by talk. The action scenes at the beginning and end of the film are reasonably well done, but they lack the intimacy of the previous films. We don't get to know any new ape characters apart from Bad Ape, surely developing one of the traveling group would have invested some emotion into their capture and knowing of their capture before Caesar learns of it might have added some tension to the film.

Matt Reeves is a perfectly competent director, and he continues down the gritty visual path set by the first two films. What he lacks here are the moments of visual resonance the previous films gave us. There is nothing as striking as Kubo riding through fire, an automatic rifle in each hand and many of the images that reach for an epic feel are undermined by the effects work (just look at the ape bodies falling in the opening action scene, they don't have the weight that the close up performance capture achieves).

There are some good ideas in War For The Planet Of The Apes, the seeding of human devolution is interesting, as is the implication of further intelligent ape tribes, but these things are pushed largely to the sidelines (or, in the former case, sentimentalised in Amiah Miller's character) for a plodding main narrative that is neither as technically impressive nor as resonant as the previous films, and fundamentally fails to deliver the central promise of its title. Overall, it's a big disappointment in a blockbuster trilogy that had previously been the high watermark for the concept of rebooting franchises.
★★
Posted by Sam Inglis at 15:26