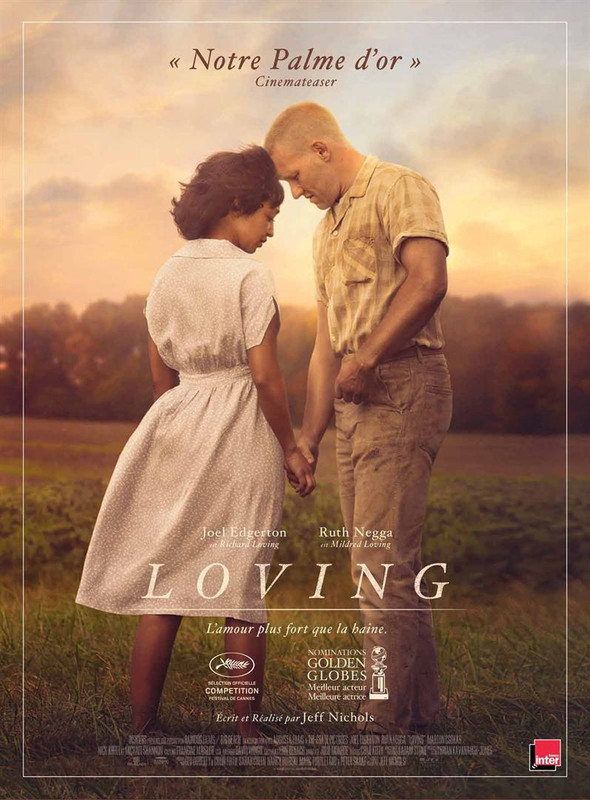 "Mr. Cohen, tell the Court I love my wife, and it is just unfair that I can't live with her in Virginia." It's a simple statement, from what seems to have been a straightforward man who simply wanted to live his life with the woman he loved, despite the fact that he was white and she was black. Richard and Mildred Loving never appeared to want to be heroes, or to make history. Jeff Nichols' sensitive film reflects that, while acknowledging that that's exactly who they were and what they did.

In 1967, the supreme court case of Loving v Virginia overturned the miscegenation laws that prohibited interracial marriages in the southern states, but Nichols is much more interested in who Richard and Mildred were and how they lived. The result is a beautifully understated film that resists any grandstanding and is all the more emotional for it.

The film opens with 18 year old Mildred (Ruth Negga) telling Richard (Joel Edgerton) that she's pregnant. We don't need the preamble of their meeting and early dating, just the simple matter of fact way that Richard tells her, after a long moment, “Good. That's good.” speaks volumes about both of them and how they are as a couple. This moment sets the tone for the film. Nichols keeps things low key and intimate throughout, relying on his actors ability to show us a great deal more than they articulate in dialogue.

Ruth Negga's Mildred is hopeful but pragmatic, it's her letter to Bobby Kennedy to ask for help overturning a judge's ban on her and her husband being together in Virginia that sets the case in motion and we can see how her gentle strength gets her husband and herself through the difficult moments. Like Edgerton, much of her emotion is played close to the chest, but it's moving when it seeps through the cracks, particularly when she takes the call about the Supreme Court decision.

Edgerton, even more than Negga, has to do a lot with a little. Richard Loving seems to have been a man of few words, but every one he does speak resonates. The sense we get is of a man trying to remain stoical, his emotions boiling just under the surface. The moment he is told how the state of Virginia will argue against his marriage at the Supreme Court and his firm “We don't need to do that” when he's asked if he will be at the hearing are the perfect encapsulation of this: it's clear he's afraid he won't be able to listen to that argument without either breaking down or saying something back. It's perhaps the best moment of a performance that is a masterclass in being expressive yet inheld. These two remarkable performances are perfectly balanced by Negga, Edgerton and Nichols, creating a couple you truly believe in because you see how they complement each other.

As this is a Jeff Nichols film there is also a striking performance from Michael Shannon, who has just one scene as the Life photographer who took a series of photos of Richard and Mildred. The moment we see the most famous of those pictures, with Richard resting his head in his wife's lap, the two of them laughing as they watch TV, is one of the film's most moving, especially as it cuts to Shannon, subtly framing that image.

Loving isn't too concerned with the big consequences of the Loving v Virginia case, nor with anything but the broad strokes of its argument. Nichols instead focuses on the personal moments of beauty in Richard and Mildred's everyday life, from standing together on the sidelines at a drag race to the birth of their children. There are no grandstanding moments in court, no shots of the couple in front of an American flag while inspiring music plays, the inspiring moments come in the determination and courage of these two people simply to live their lives together. Nichols captures it beautifully, crafting resonant imagery without it feeling like he's trying to squeeze this story into a cookie cutter Hollywood biopic. This might be his best film to date.
★★★★
Posted by Sam Inglis at 10:00