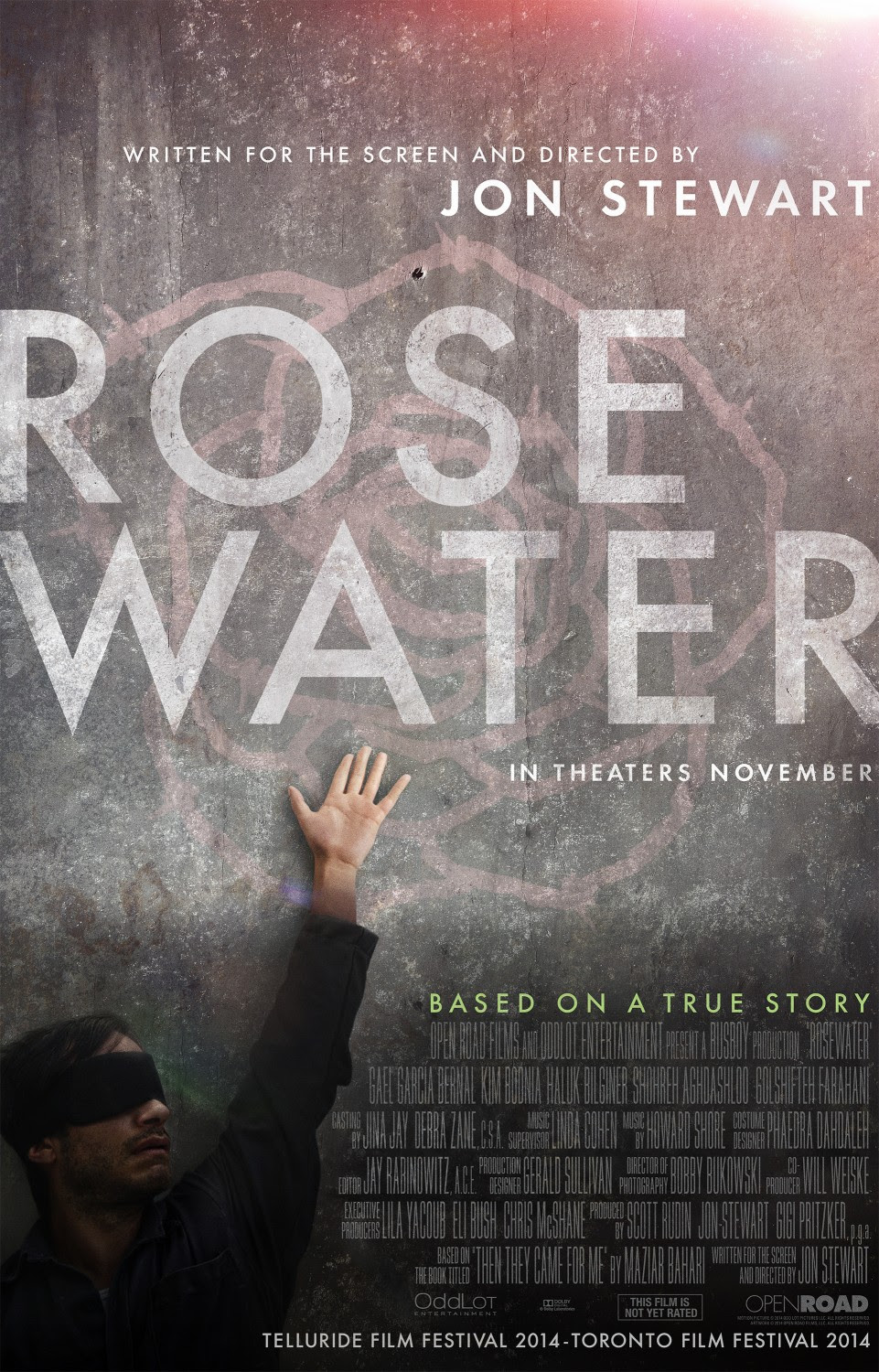 Jon Stewart does a valuable thing on TV. For sixteen years he's mocked the powerful and used his comedy as a platform to better inform viewers than many news stations that aren't satirical manage. His first feature film as writer and director seems born out of a desire to more seriously examine what is happening to some journalists who seek to tell the truth. This is an important idea, but Stewart fumbles the ball.

Rosewater is the story of Maziar Bahari (Gael Garcia Bernal), an Iranian Newsweek journalist who was imprisoned and accused of being an American spy after reporting on the Green revolution of 2009. The film largely follows his time - five months - in prison as his interrogator Javadi (Danish actor Kim Bodina) attempts to break him down and make him confess.

Stewart has cast good actors in the leading roles, but the casting itself is problematic. I understand the commercial pressures that mean this film has to be in English, but this is one of many things that make the frequent interrogation scenes feel more like acting exercises than glimpses of what happened to Bahari. This is an Iranian story, the specifics of it have international implications, but it's an Iranian story, about Iranian people.  For me, having it delivered in English casts an inescapable layer of artifice over the whole film.

Beyond this, there is a stilted quality to the performances; everything feels stiff and stagy.  I'm not sure how Stewart handled directing the cast, but at times it feels as though Bernal and Bodina, who aren't bad despite weak and repetitive dialogue, are crying out for notes. And yet, these may be the strongest parts of the film, so wildly miscalculated do other bits feel.

While in prison, Bahari hallucinates and has conversations with his late Father (Haluk Bilginer) and Sister (Golshifteh Farahani). These scenes are marked by a drab and overly-literal visual style, and by some terrible dialogue. These scenes should be some of the most impactful of the film, but they ring false throughout, with the same uneasy performances and sense of too loose a directorial grip.  Stewart doesn't seem to know how to, either with dialogue or performances, mine these scenes for genuine emotion. Instead he settles for Bahari imagining his relatives spouting empty clichés and platitudes in his direction.

The setting, mainly inside the prison, gives Stewart a limited and very bare visual space to work with, but he never makes much of it.  We should feel the toll that the very drabness and tedium of his cell has on Bahari (or the ways he overcomes that seeming inevitability), but we don't. The space never feels dynamic; it never seems to press in on Bahari. Stewart never finds an interesting way to shoot the cell or the interrogation room. Limited space can create tension or force a director into interesting visual motifs - look at 12 Angry Men or The Silence of the Lambs - both of these things elude Stewart, and the film is often a dull watch because of it.

When Stewart does try to deploy a few bits of what passes here for directorial style, his inexperience shows through. A sequence of Tehran lighting up with onscreen hashtags feels like a lazy way to depict the Twitter drive of the Green Revolution and the bitty editing that he often employs to show the length and relentlessness of the interrogations is not just ineffective, it actively undermines the point he's making.

One extended moment that does work quite well occurs when Bahari is allowed, for the first time in months, to call his wife.  He's supposed to tell her to stop saying bad things about Iran, but instead, of course, simply reconnects with her and asks how her pregnancy is progressing.  Bernal is effective in this moment, especially when Bodina yells at him that he must 'control this woman' and Bahari laughs in his captor's face, unable to contain his joy at speaking to his wife.  Even here though, problems persist.  The fact the whole film is in English slightly confuses the issue of whether Javadi understands all of what Bahari says to his wife.  If so, why is Javadi passive for so long, rather than insisting Bahari stick to the script?

One scene is truly fascinating, though less for what is happening in front of the camera than what it implies about what is happening behind it.  A restaging of Bahari's parodic interview with The Daily Show's Jason Jones, which was then used as 'evidence' against him by his captors, is decently shot and acted. What makes it more interesting than that is Stewart's tangential involvement. This pervades the film, making the whole thing feel like one long letter of apology to Bahari.

Ultimately, Rosewater is as well-intentioned and sincere a piece of work as that scene implies. Nevertheless, it fails on most counts.  Stiffly acted and poorly directed, it never communicates the importance of its story and never feels like anything more than a scratch at the surface of what happened to Bahari, and continues to happen to many other journalists.  Perhaps Jon Stewart should stick to talking about these issues by being scathingly funny.
★★
Posted by Sam Inglis at 14:04