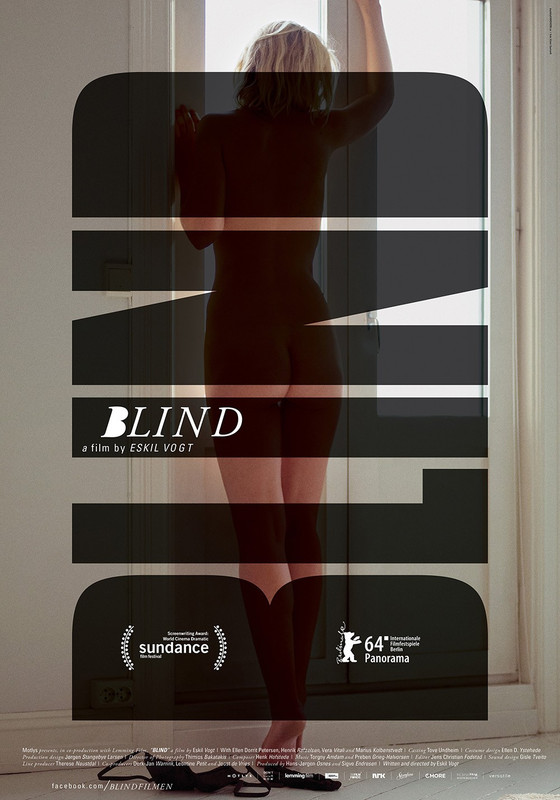 Acclaimed Norwegian screenwriter Eskil Vogt makes a strong, darkly playful, directorial début with this drama about Ingrid (Ellen Dorrit Petersen), a 30 something woman coming to terms with the recent loss of her eyesight.

The driving force of Blind lies in Ingrid's attempts to understand the world again and gain the confidence to go back out into it, now that she can't see it.  This is straightforward enough, but it's the way that Vogt elects to tell the story - blending Ingrid's reality ever more freely with a story she is writing - that sets Blind apart.

Initially it seems that two of the film's key characters; sad sack Einar (Marius Kolbenstvedt) and single mother Elin (Vera Vitali) may exist entirely in Ingrid's head.  Ingrid definitely has a degree of control over them.  In an early scene, on a whim, she switches the 10 year old son she had given Elin for a daughter.  However, as the film goes on, and especially as Elin's husband Morten (Henrik Rafelson) is folded into both Einar's and Elin's stories, the lines dividing 'reality' and fantasy blur.

All of this bleeding between 'fact' and fiction, 'real' and surreal, is grounded by the performances.  Vera Vitali, saddled with a character who becomes a sponge for all of Ingrid's negativity, punishment piled on her, does a good job of retaining a sense of a real person who doesn't understand the misfortune that is being visited on her.  In these moments there are more than a few echoes of Stranger Than Fiction, though with decidedly less whimsy.  As Einar, Marius Kolbenstvedt makes his depressive, porn addicted loner similarly recognisable, and while he is pathetic in many ways, Einar also engenders our sympathy, especially when he sits and chats with his old friend Morten.

Henrik Rafelson is more solidly grounded in the film's real world.  The way he articulates both Morten's understandable frustration with his wife's seeming inability to return to any semblance of normal life and his love and concern for her, often in a single moment, is moving.

However, good though they are, all three of these performances are left in the shade by Ellen Dorrit Petersen's work as Ingrid.  Physically fragile looking, her skin almost translucent, it's not hard to believe that Ingrid has been locked in her flat for months.  Her physicality in the performance is brilliant, from the fact that you never see her have her eye drawn by something down to the fact that, even without dialogue, you can see how that hurts her.  This is most notable in a scene in which she tries to seduce her husband, who doesn't seem interested.  It's clear that, at the very least, Ingrid believes this is partly because when she manages to look at Morten now there is no connection, because she is not seeing him.  In an eloquently silent moment we feel just how much this hurts them both.  This is the first I've seen of Ellen Dorrit Petersen.  It will not be the last.

Eskil Vogt gives Blind a stark look throughout, but he does draw a visual distinction between the apartment (perhaps to be seen as Ingrid's interior world) and the world outside those walls.  The apartment and most of its contents are white.  This makes sense because Ingrid says they moved in after she lost her sight.  The implication is that it is so bare (especially what we see of it when she is alone) because she can't visualise what colour it might be or much beyond the contours of the place.  Outside the apartment there is still a harshness to the images, but it seems Ingrid can recall enough to colour this imagined world in at least a bit.  That said, we don't see this outside world romanticised, at least not until the very end of the film, which is literally and figuratively a little sunnier for Ingrid.  The two sides of the film's world do feel visually distinct, but they share enough DNA that they convince as both being a part of the way Ingrid now 'sees' her world.

All this said, even if Blind's other qualities were lesser or more arguable, it would still be near essential viewing just for Ellen Dorrit Petersen's performance.
★★★★
Posted by Sam Inglis at 21:28