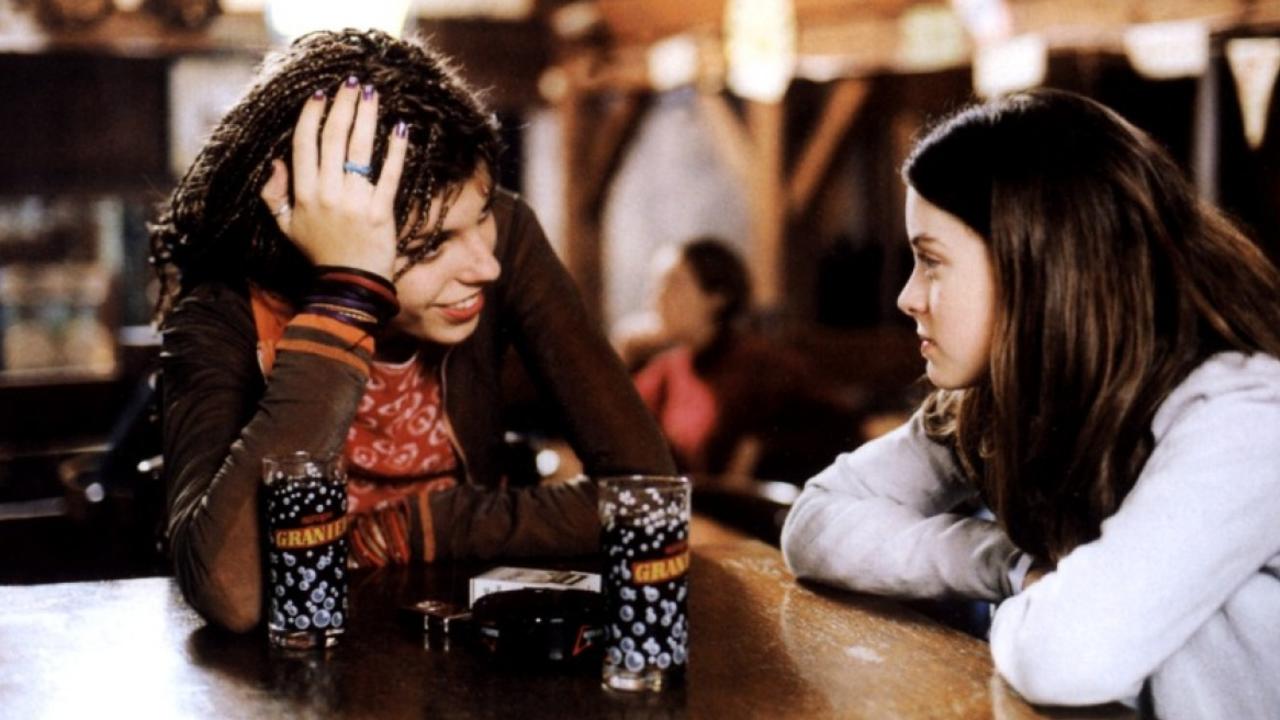 For about 45 minutes this is a fairly typical coming of age movie.  14 year old Delphine (Maud Forget) is something of a wallflower at school, but that changes when new girl Olivia (Lou Doillon) arrives.  Though they're very different the two hit it off and soon Delphine has met and fallen head over heels for Laurent (Robinson Stevenin), who becomes her first boyfriend.  Laurent and his friend Alain, who is Olivia's boyfriend, want to escape to Jamaica and things take a much darker turn when they rope the girls into a horrible plan to get the money for tickets.


I was taken off guard by this film, which doesn't happen often.  After seeing thousands of films over the past 25 years I can usually tell where something is going but from the light, if very well observed, first half of Mauvaises Frequentations I would never have expected the dark and sad turn that it takes in its second half.  What's remarkable is that the change of tone, sharp though it is, is neither cheap nor jarring.

The fact that the two halves gel as well as they do is largely down to three excellent performances from the leads, all seventeen at the time.  Making her debut, Maud Forget is extremely well cast as Delphine.  She's playing fourteen, but her delicate looks often make her appear even younger than that, which makes the film that much more impactful and that much more difficult to watch when she is put in compromising situations.  This delicacy and innocence about Forget plays well for the wallflower that we find her as at the beginning of the film, but her sensitive performance as Delphine falls recklessly and naively in love with Laurent makes the changes that she goes through realistic and moving.  Delphine is an appealing character; even her bad decisions seem to come from an inherent sweetness and a misplaced desire to please, and that only makes the second half of the film all the sadder.

Forget is very much the centre of the film, but the changes her character goes through are extreme and only really believable at a story level because of her friendship with Lou Doillon's Olivia.  That friendship has to work for the film to work.  You can see why Olivia's energy draws Delphine in; Doillon is a charismatic presence, but we get to see that they connect on multiple levels and that Olivia is a good influence on her new friend (I had assumed that she would be the 'Bad Company' of the title, but she's not).  Robinson Stevenin also impresses as Laurent, we can see how he plays on Delphine's naiveté, and the lack of interest in her that he's masking, but we can also see how well he's masking it and how, once he knows that she's fallen for him, he recognises that she is ripe to be exploited.  The dual layers of the performance give us an insight into both his and Delphine's characters.

I don't want to say very much about the second half of the film, because that would kill much of its power, but one thing that comes through strongly in both parts of the film is Cyril Cagnat's performance as Justin; a childhood friend who has been in love with Delphine since they were eight.  I can't tell you how much I identified with Justin (he's also a film buff), or how much one key scene in the film's last half hour broke my heart, but this side story is typical of how well written and played Mauvaises Frequentations is.  I wish I could get into more details, but you'll thank me for not doing so after you watch this one.
★★★★★ 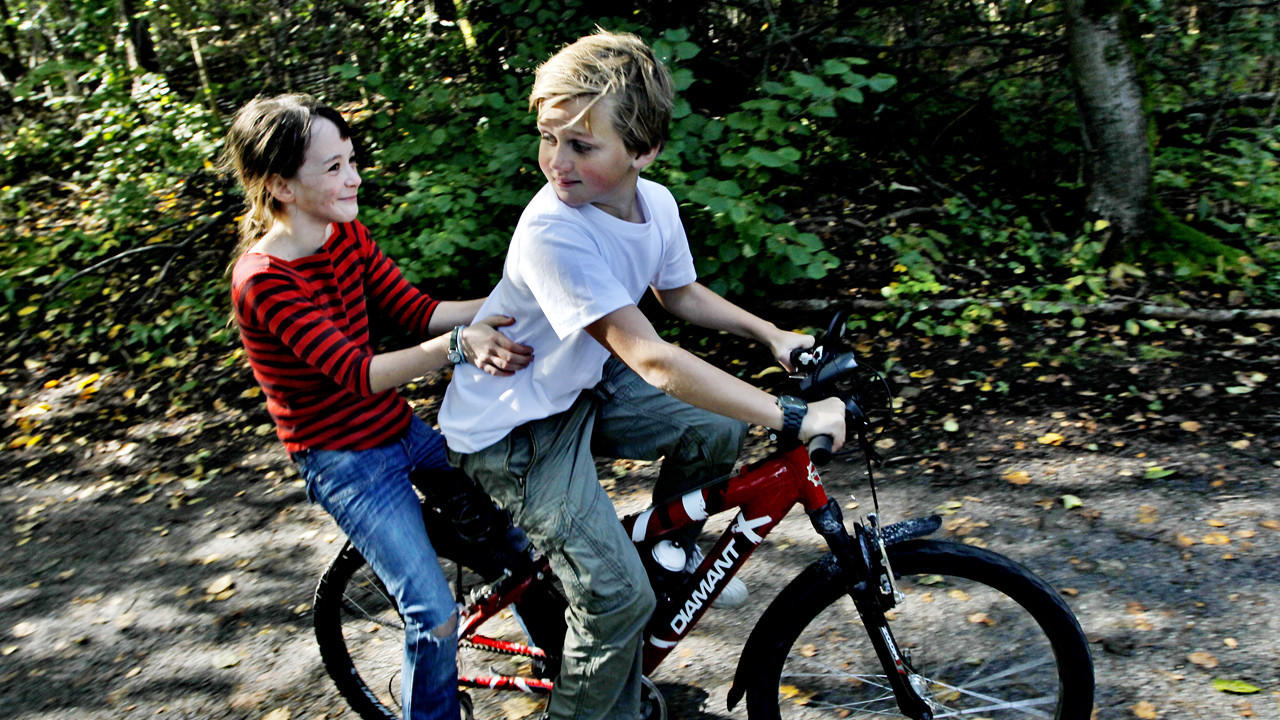 Most of the films that I have been writing about in this series have been about teenagers and largely intended for either a teenage or an adult audience.  Totally True Love is different in both respects.  This Norwegian film is about and seems largely pitched towards ten year olds, but what made it a wonderful experience is the fact that it never assumes that being about or for kids is an excuse to be simplistic.

Anne (Maria Annette Tanderød Berglyd) is ten years old and despite most of the rest of the kids in her class having boyfriends or girlfriends she's never been that interested, until Jorgen (Otto Garli), the new boy in school, arrives.  When they meet Anne falls for Jorgen instantly but she has a rival in the form of the most popular girl in class; Ellen (Vilde Fredriksen Verlo) so Anne and her friend Beate (Aurora Bach Rodal) hatch a plan to make sure that Jorgen doesn't know Ellen is interested in him.

Perhaps the best thing about Totally True Love is that, unlike many films, it doesn't view kids simply as shorter versions of adults.  These ten year olds get to be ten.  Their concept of love is adorably naive and expressed in love letters that are earnest and innocent in exactly the right way.  The film also absolutely gets the pettiness that little kids are capable of; how friendships can be broken and repaired in days over the tiniest of things.  What it understands best though is how first love, when you're barely even equipped to understand the concept, feels.  In these terms, it's the best film about young love since the much underrated Little Manhattan.

Outside of Anne's lovely voiceover, which is written in a style that totally fits both her age and character, it's hard, at times, to tell how closely written the film is.  There is such a sense here of kids just being kids that many scenes have a natural, almost improvisatory, feel.  Scenes between Anne and her 12 year old brother or Anne and Beate and scenes in the schoolyard are especially strong in this respect.

The film has a great energy, largely provided by Anne.  The first ten minutes set the pace as, via a voiceover that flits from thought to thought and subject to subject in short order, Anne introduces herself, her friends, and her family .  It's funny in the way that kids can be without realising it ("That's my mum. And that's my dad. Dad likes Mum best when she's upset and breaks things.") and is matched by a bright and energetic visual sensibility from director Anne Sewitsky.  This introduction also makes it easy to like and be engaged with Anne, it would be hard not to, Maria Annette Tanderød Berglyd's performance is both fun and emotional; an impressively layered piece of work from such a young actress.

Jorgen is less developed than Anne, but that's okay because Anne's crush on him isn't really based on anything concrete (though a scene where she flips through a photo album he drops is very sweet).  We're supposed to see Jorgen through Anne's eyes and through her imagination, in some very funny fantasy sequences inspired by the reality TV she watches.  For his part though, Otto Garli is solid as Jorgen, giving off a believable vibe as a sincerely decent kid, which is as much as is needed of him here.  All the kids are excellent.  Vilde Fredriksen Verlo has a slightly one note role as the most popular and bitchiest kid in year five, but the film suggests something about why she's like that (without laying it on too thick) and gives her a lovely and amusing final scene.  Perhaps best of the young supporting cast is Aurora Bach Rodal.  Beate's best friends relationship with Anne is beautifully drawn and the scenes between Berglyd and Rodal never strike a false note.

Even though Totally True Love is for kids the fact that it never talks down to them and doesn't shy away from complicated (if juvenile) feelings means that it's just as engaging and just as charming for an adult audience.  If you have kids watch it with them, if not, see it for yourself, it's lovely.
★★★★★
Posted by Sam Inglis at 13:07