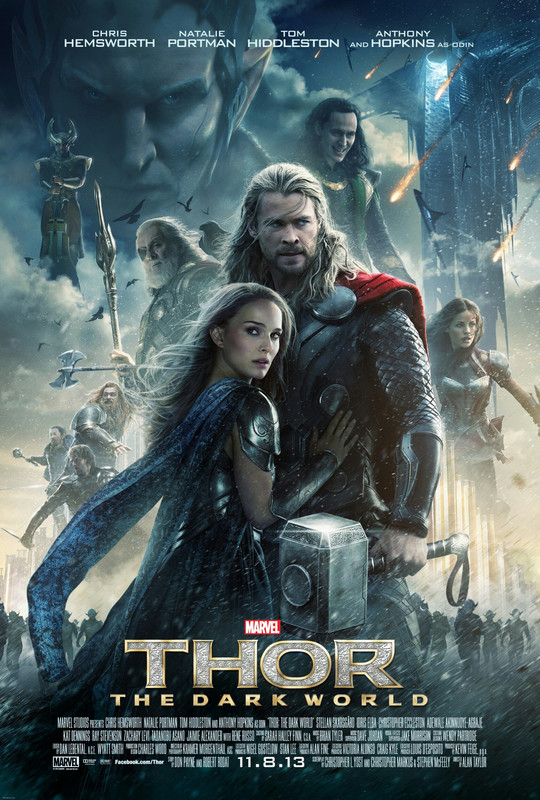 Generally speaking, I've enjoyed the films based on Marvel comics much more than those based on DC properties.  They've had their misses (notably the awful Fantastic Four films and the horrendous recent Spider-Man reboot), but generally they've managed to be well cast, exciting and plenty of fun, especially those films that built up to Avengers Assemble last year.  Of the Marvel's Phase 1 films, Thor wasn't the worst, but it was for me the one that felt most perfunctory and where the tone and characters felt most awkward, though it did give us a fine villain in Tom Hiddleston's Loki.

Taking place a few months after Avengers Assemble, The Dark World sees Asgard and the rest of the nine realms threatened by a dark elf named Malekith (Christopher Eccleston) who is after an ultimate power, long thought lost, known as the aether.  Of course Thor's (Chris Hemsworth) physicist girlfriend Jane Foster (Natalie Portman) gets wrapped up in events and to save both her and the nine realms Thor must choose to trust his brother Loki.

For me the biggest problem with Kenneth Branagh's franchise opener was the fact that it felt like two different films jostling for position.  There was a reasonably dark drama, with unmistakable Shakespearean overtones; two superpowered brothers vying for a throne and their Father's approval.  Then there was a goofy fish out of water romantic comedy.  Everyone worked hard, but for me the film never squared the circle and in this respect The Dark World represents a step backwards.  In the first film the main villain did at least feel like a threat, a personal one at that, and the motives behind his plans had weight.  Here the villain of the piece is an underdeveloped bore, a clearly slumming Eccleston evincing all the enthusiasm of a man making a mortgage payment, and even when his plans involve Jane there is no real sense of weight or threat about them.

If the threat falls flat this time then so, as it did before, does much of the fish out of water stuff.  I'm not the greatest fan of Natalie Portman, but she's completely wasted on the pathetically thin role of Jane Foster.  I know Portman is, in real life, extremely intelligent and accomplished, but whether it's the writing or the performance the idea that Jane is a brilliant physicist is only slightly more credible than Denise Richards being a nuclear physicist in The World Is Not Enough.  For the most part Jane seems to exist to provide exposition and be in a laughably underdeveloped romance with Thor.  The problem is that she hardly has a personality.  Outside of these two things - is a scientist, fancies Thor - I would struggle to tell you one thing about the character even after two movies.

The earthbound part of the film falls completely flat, not just because Jane is so monumentally dull, but because her friends are back.  Kat Dennings' Darcey may be the most annoying and most pointless character in the Marvel cinematic universe.  She does not one useful thing and exists solely to crack jokes, every one of them bad.  This is probably not Dennings' fault, but still, every line she has is like fingernails down a blackboard.  If Dennings and Portman are both wasted something sadder happens with Stellan Skarsgaard, who is utterly humiliated as Eric Selvig.  It's sad to see the film stooping for laughs, reducing itself and Skarsgaard to a scene in which the principal gag is that he's not wearing trousers.  The only honest laugh the film achieves in its earthbound scenes is unintentional, prompted when Thor asks for directions on the tube and is given woefully incorrect advice.

So that's the Earth half of the film, what of Asgard?  This time out the film spends more time in Asgard, but it doesn't really develop either the place or the story very much and ends up hitting many of the same beats as the original.  That said, Chris Hemsworth remains perfectly cast as Thor.  He's got the physical presence but also has the charm and charisma to carry the film on his absurdly large shoulders, as well as a solid way with a one liner.  Hemsworth, like everything else in the film, comes off best when he's alongside Tom Hiddleston's Loki.  It's annoying that Loki is sidelined for so much of the film - and in such a similar way to what happened to him in Avengers Assemble, indeed one line is almost a direct quote - but even hemmed in Hiddleston is brilliant.  There is such palpable glee to his performance that whenever he was on screen having fun, I was too.  The film's best sequence involves the planning of Thor, Jane and Loki's escape from Asgard, you can feel just how much the writers enjoyed this sequence and especially how much fun one cameo player was having channeling Loki while in character.  The only problem is that because Loki is only in the film for about half an hour the rest just feels like it's marking time between his scenes.

Director Alan Taylor brings a slightly darker visual sense to this film, perhaps inevitable with an overcast London replacing the sun baked New Mexico desert, but otherwise he fails to stamp any real directorial authority on the Marvel universe.  This is one of the biggest disappointments of the film.  For better or worse Marvel does seem to allow their directors quite a free hand, their last two films, Avengers Assemble and Iron Man 3, were unmistakably the work of Joss Whedon and Shane Black respectively, in these terms Taylor simply comes up empty.  For the record, I saw the film in 2D, but I can't imagine the 3D adding anything and I'm glad I didn't have to see the Dark World scenes with a 30% loss of brightness, because they're already pretty dark, as you might expect.

Ultimately Thor: The Dark World suffers from the exact same issues as its predecessor: the tone is mismatched, the comic relief often unfunny, key characters underdeveloped and on the whole it seems to be less a standalone film than a facilitator; the phase 2 Thor movie that has to happen before Avengers: Age of Ultron.  Hemsworth and Hiddleston just about save it from total redundancy, but it's little fun and seeing it felt more like an obligation than a pleasure.
★★☆☆☆
Posted by Sam Inglis at 18:05