I have always been a fan of coming of age cinema, I was introduced to these films by the great American examples of the 80's and 90's, when I was the same age as many of the characters, but recently the best examples have been coming not from the US but from Europe and Scandinavia.  The Spectacular Now doesn't shift that balance by itself, but it is the best American coming of age film I can remember seeing for some time.


Sutter Keeley (Miles Teller) is a high school senior, he's smart but unmotivated and his fondness for a drink has developed into functioning alcoholism.  However, Sutter is also a decent guy and makes friends very easily.  When he's dumped by his girlfriend (Brie Larson) Sutter has a wild night and wakes up on Aimee's (Shailene Woodley) lawn.  The two immediately like each other and Sutter takes Aimee - something of a wallflower - under his wing, telling himself and others that they are just friends, even as they get closer and closer.


Most characters are simple; they're good or they're bad; they're funny or they're serious, few ever really deviate from broad parameters.  People, you may have noticed, aren't simple.  The Spectacular Now knows this, every time you think you have a handle on a character the script and performances peel back another layer.  This is especially well done with Sutter, who is an incredibly complex character; he's great at making friends, but has very few; he can be incredibly abrasive, but he's also genuinely caring.  Ultimately Sutter is someone who has all the tools to be a great person but often makes the choice to be an asshole.  It's a tough balance to pull off, but Miles Teller does it brilliantly, making us root for Sutter, understand why Aimee likes him so much and want to slap him, sometimes all in the same moment.


Aimee is not your typical manic pixie dream girl; her awkwardness feels real, not affected or studied and she talks like a normal person, rather than a walking book of meaningful kookiness.  Aimee also looks like a normal person.  This isn't to say that - even de-glammed and for the most part wearing no makeup - Woodley isn't beautiful, just that the film isn't interested in having, or trying to make her into, a Megan Fox like Barbie doll.  It's refreshing, too, that when Sutter wants to 'do Aimee a favour' by hanging out with her, his motive is not to change her so much as to let everyone else see how great she is.  This is no Pygmalion story, and all the better for it.


The film begins in basically the same register as Sutter's character; sarcastically comedic, but it – like its characters – slowly begins to shift as time goes on.  The tone shifts in a slow fade, introducing tension in the form of Sutter's long-absent father (a typically excellent cameo from Kyle Chandler), as well as an increasing seriousness to Sutter and Aimee's relationship, which is underscored by a sex scene that is deliberately not romanticised. 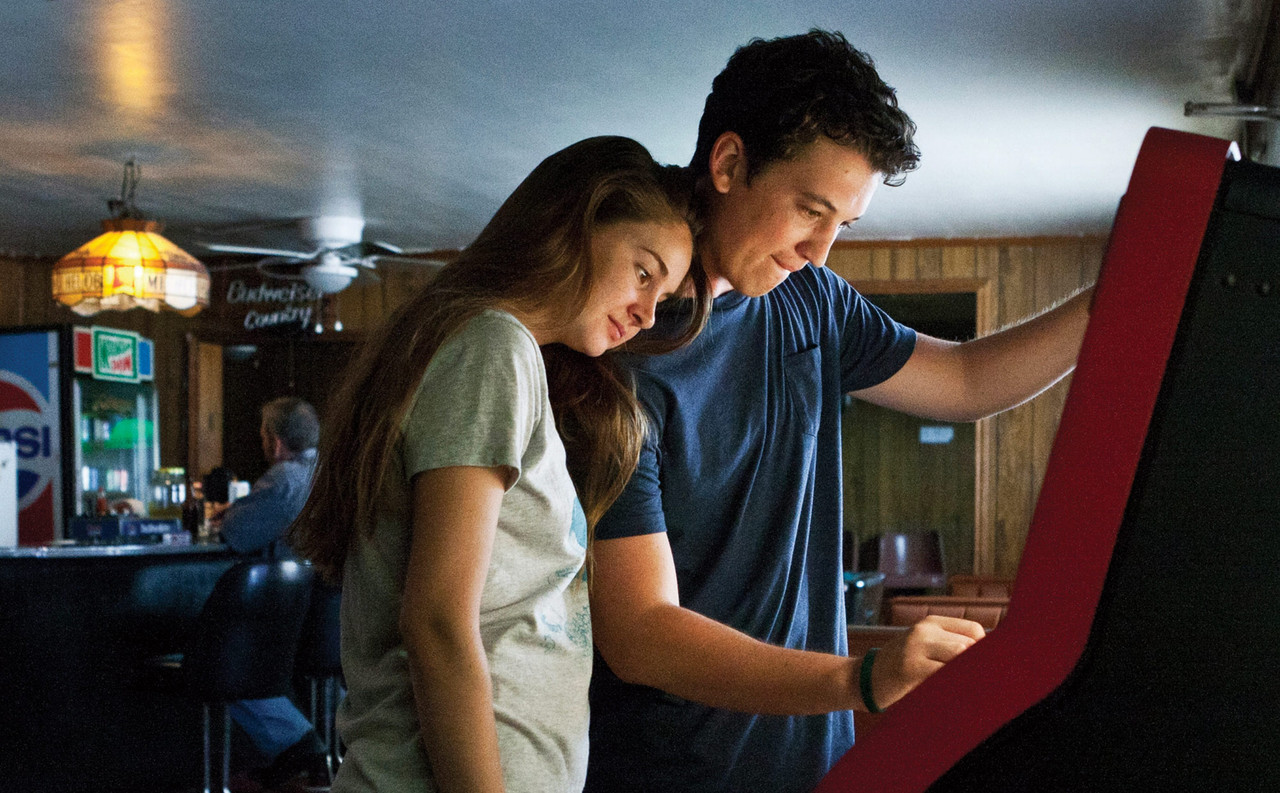 Because the shift in tone is gradual it feels natural, and this means that both sides of the film work equally well.  The teen romantic comedy of the first half charms as we see both Sutter and Aimee begin to change.  Woodley is wonderful here, the way her Aimee lights up every time Sutter says something nice or walks over to her is sweet, but it's also tinged with sadness because we know that, at this stage, their motives aren't the same.  Watching Aimee come to life we get to see what Sutter initially sees in her, you can't help but be charmed by her naiveté.  From another actress, you might not believe the dismissal of the possibility that someone would flirt with her, or think it a ploy, but Woodley makes it, and everything else Aimee does, totally honest.

Another thing that The Spectacular Now recognises about real people is that our character arcs tend not to be huge.  If we change we usually do it slowly and only by degrees.  Sutter begins the film as a fuck up and he largely ends it that way too, but the development that we do see is that he begins to see how he is a fuck up and to try to change it.  Not only can we believe this evolution, but we root for it throughout the film, because even as a fuck up Sutter is sympathetic.


While the film focuses largely on Sutter and Aimee it's not entirely a two-hander.  The supporting cast drifts in and out of focus, largely in small roles, but director James Ponsoldt gets strong work from all of them.  Brie Larson is an actress who keeps showing up in small parts and impressing me, she does it again here as Sutter's ex, who moves on rather faster than he does and Mary Elizabeth Winstead, the lead in Ponsoldt's previous film, Smashed, also impresses as Sutter's older sister.  However, the most impressive supporting turns come from Kyle Chandler and Jennifer Jason Leigh as Sutter's parents.  Chandler's absent screw up of a father is a role it would be easy to overplay, but he doesn't and yet still extracts every bit of resonance from the similarities between his and Miles Teller's characters and performances.  Jennifer Jason Leigh, as has been typical for her lately, has only a handful of scenes, but is customarily excellent, bringing emotional truth and weight to what could be a sappy scene with Teller towards the end of the film.  The film can hit hard at times.  In one moment it almost feels like too much, like it's just trying to pile on too much misery at once, but even that moment ends up echoing effectively right up until the film's final shot.

The screenplay and the performances carry The Spectacular Now, but that's not to say that it doesn't also look good.  The style is never self-conscious, but there are a lot of smart and evocative choices here from the spare style of the sex scene to a more composed shot of Sutter and Aimee talking after prom, both of them reflected in a window, subtly suggesting the different visions of the relationship that each of them has. It's an image that, like much of the film, finds beauty in the mundane.


Ultimately, with its deft mix of comedy and drama; mismatched couples and disappointing parents, The Spectacular Now sometimes comes off as a bittersweet, more realistic, take on Say Anything.  When a new film ends up reminding you of one you've loved for a long time, it needs to be great to get away with it.  The Spectacular Now gets away with it.  Cameron Crowe's film echoes throughout this one (right down to a similar and equally brilliant cut to the end credits), but Ponsoldt isn't imitating it, and ends up going down different roads with both plot and tone.

It's been too long since there was a great American teen movie, it will take time and more viewings to know whether The Spectacular Now really is the latest, but right now it feels like it might be.
★★★★★
Posted by Sam Inglis at 15:48