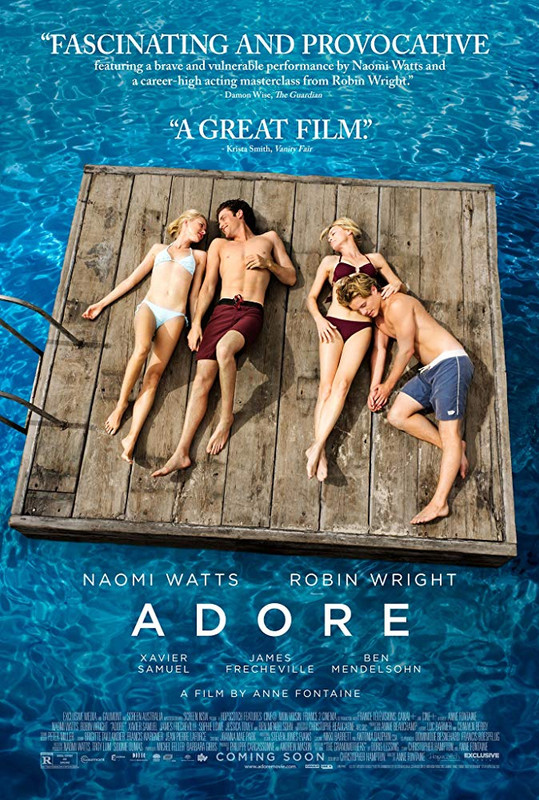 Adore is easily the funniest film I've seen so far from this year's London Film Festival crop. What a pity it's a drama.

Ros (Robin Wright) and Lil (Naomi Watts) have been friends all their lives. In their forties, they are living idyllic seeming lives on the coast of Australia, Ros with her husband (Ben Mendelsohn) and late teens son Tom (James Frecheville) and the widowed Lil with her own 18 or 19-year-old son Ian (Xavier Samuel). The families have always been close, but one night when Tom has gone to bed drunk and with her husband away in Sydney, Ian kisses Ros, who reciprocates, kicking off an affair between the two. Tom catches them, but rather than say anything responds by beginning his own affair with Lil. The film follows the ups and downs of these two relationships and that between Tom and Ian over about five years.


I think the biggest problem with Adore is it's easy to see how it could be a promising project. The story (based on a Doris Lessing novella, The Grandmothers) has an inherent drama about it, given that it's rife with betrayal and the potential for broken friendships and relationships. On the surface, it is also very well cast. Naomi Watts is someone I've been a fan of. Even when she's sometimes been stuck with a generic screenplay (Fair Game) or the film she's in hasn't entirely won me over (The Impossible), she tends to impress, sometimes elevating films through her work. Robin Wright works less often than Watts, but I've long thought her an underappreciated talent, and I've enjoyed seeing her make more frequent screen appearances lately. To be fair to Watts and Wright, they do what they can here and give pretty remarkable performances given what they have to work with. This isn't to say that you'll buy anything that happens in Adore, just that the fact you won't is the fault of Christopher Hampton and Anne Fontaine's screenplay rather than the acting.


Adore is dull in a rather particular way; everything is purely surface level. This is as true of the imagery as it is of the writing.  Fontaine is blessed with a beautiful landscape to shoot and gorgeous actors to film against it, resulting in a film that superficially looks good. However, there is little behind any of it, the visuals do little that isn't backed up by bald dialogue, and the few things that are left purely to the visuals are equally telegraphed.


The premise promises drama, but the film seems almost allergic to it. The whole thing is excruciatingly polite. Any moment that suggests any kind of confrontation is swiftly cut away from and left to play out off screen. Among the dramatic events that we never see are the first couplings between Ros and Ian and Lil and Tom, the arguments (and reasons) that Ros and her husband divorce and the argument between Tom and Ian when they first find out they are each involved with the other's mother. Each of these things seems rather key to the narrative and the fact we see none of them is a problem because there is nothing in their place aside from risible dialogue. Dramatic restraint is fine if it means something, but there's no tension and no great insight into the characters through that restraint, so it just becomes tedious and silly.


The lack of passion and the lack of drama completely undermines the film. First, because there is no sense of the visceral chemistry that surely should power these twin affairs, but more damagingly because it gives us the sense that Adore takes place in some sort of alternate reality. This is a reality where two lifelong friends, on discovering that each has betrayed the other - in a frankly icky way - clear things up with a chat that consists of this exchange: Ros: “What have we done?” Lil: “We've crossed a line.” and then decide that, hey, let's just keep crossing it. In any real world this story wouldn't feature that conversation, it would end up as a shouting match on Jeremy Kyle. It was at this point that I and the majority of the audience stopped taking Adore at all seriously.


There are two ways Adore could work; by being serious or by being silly. Anne Fontaine desperately wants to be taken seriously, but she keeps fumbling the ball with such comical scenes as one in which Watts' boss comes to ask her out, but ends up thinking she and Wright are lovers or the gut-busting penultimate scene in which Lil tells Ros - whose actions help start everything - “You're the only one who hasn't behaved badly.” If Adore wants to be taken seriously, fine, but it needs to delve much deeper into its characters than a few brief scenes of the absurdly beautiful Ros and Lil worrying about their age. If Adore wants to be a farce, fine, but it needs then to play as though the laughs are intentional. The problem is that it never decides, and ends up being Bergman's Blame It On Rio. Yes, it's as bad as that sounds.
★☆☆☆☆
Posted by Sam Inglis at 13:25