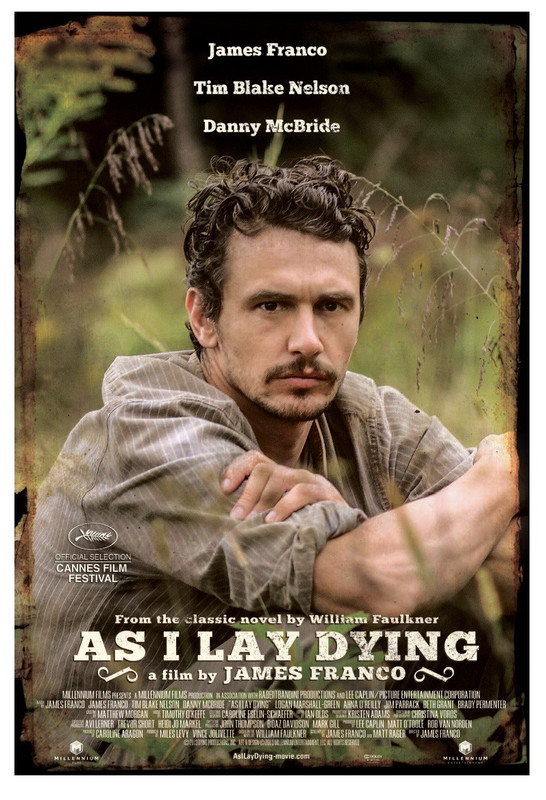 Your response to As I Lay Dying will likely depend on your response to co-writer/director James Franco.  I'm mixed on him; there is clearly talent there, but he's also got a tendency to spread himself thin and allow his artsy pursuits to become very self-indulgent. For me, this tends to make his work harder to love than it is to respect.


Based on William Faulkner's novel (which, for the record, I've not read), As I Lay Dying tells a very simple story of an extremely poor family; father (an impenetrably accented Tim Blake Nelson), four sons (including Franco and Logan Marshall-Green) and sister (Ahna O’Reilly) and their journey to bury their recently deceased mother (Beth Grant).  Along the way family tensions and secrets emerge.

Perhaps because of the overwhelming simplicity of the story and the potential tendency toward melodrama, Franco opts to use a very consciously designed, elliptical, impressionistic style that constantly alerts you to the fact that you're watching a film.  Passages that apparently occur as internal monologue in the book are here rendered as fourth wall breaking pieces to camera, the one thing that could be fairly called an action sequence is drained of all sound and about half of the film is split screen.


For me, Franco's use of split screen is the perfect demonstration of the film's successes and its failures.  When the technique works – as when it juxtaposes Dewey going to procure an abortion as her brothers dig their mother's grave – it works beautifully, providing interesting ideas, and it frequently means we have two beautiful shots on screen rather than just one.  On the other hand, it can also feel like a crutch, as though Franco is using it to avoid choosing between two shots he likes, or as though we're watching two different films at once.  It's telling that as the film develops more of a plot as it goes on Franco relies on the split screen less and less, which also suggests that in the uneventful opening hour it is a bit of a crutch.


There are great things here; a beautiful, intricate and unusual score, breathtaking cinematography, a set of fine performances, especially from Marshall-Green, O'Reilly and Franco himself and a clear craftsman's hand at work.  I just wish that Franco could rein himself in a little, display his directorial sleight of hand when it will add the most to the film, rather than with the near indiscriminate frequency he does, it's this that marks the film out as a debut.

The problem with all this technique is that it is, for me, extremely distancing.  This may be by design, but I still found it extremely frustrating.  The film held me at arm's length for the first hour, but as the story and characters developed I found myself drawn into the story of this family until, every now and then, the movie would in essence shout 'you're watching a movie'.


Some people will love As I Lay Dying and I can see why, but Franco consistently works against his own film, I wish he'd trusted it more.
★★☆☆☆
Posted by Sam Inglis at 20:16