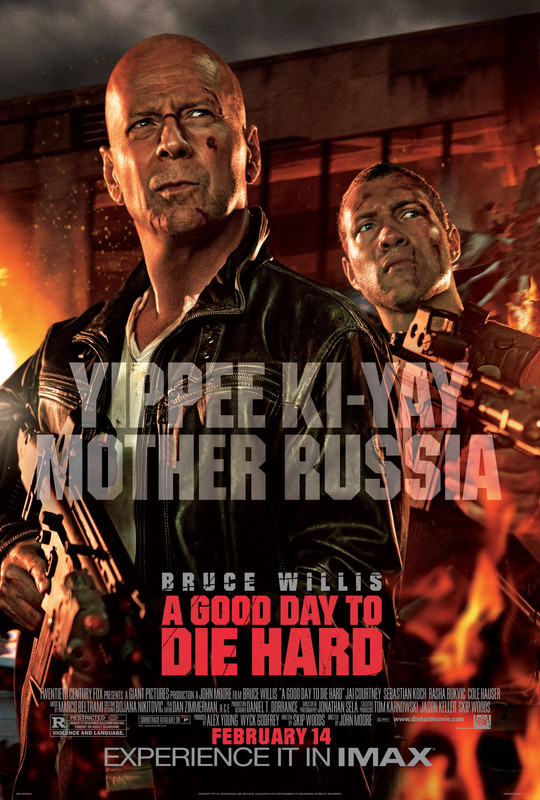 I refused to see A Good Day to Die Hard at the cinema because 20th Century Fox decided to baby British viewers, cutting the film for a 12A rating at the cinema for purely commercial reasons, while releasing the full R Rated cut (though NOT this cut, which is exclusive to Blu Ray) in the US.

The fifth in the series, A Good Day to Die Hard follows John McClane (Bruce Willis, visibly totting up what he's going to do with the paycheque) to Russia, where his son Jack (Jai Courtney) is on trial for murder.  Of course that's not the whole story, Jack is CIA agent charged with protecting a man (Sebastian Koch) who may have information on a nuclear plot against the US and John gets caught up in his mission.

It's difficult to enumerate the ways in which A Good Day to Die Hard is a terrible movie, but I'll try to give you a partial list.

1: It is all - ALL - teal and orange.
This is one of my least favourite current trends, one that is making movies all but indistinguishable from one another and almost every single shot in AGDTDH is filtered with either a steely teal blue or an amber shade (mostly the former).  It looks atrocious, and is just one more thing that undermines the verisimilitude that made the first Die Hard so great.

2: It's weak sauce.
15 it may be, but even in this version AGDTDH is anaemic when it comes to any really adult content.  At least when Die Hard 4.0 was beefed up for  its uncut version there was something of the sweary snap that McClane had in the first three films.  Here the language remains very muted (about six F Bombs), and feels very perfunctory and tacked on.  The difference, it seems to me, is that for 4.0 restoring McClane's cursing may have BEEN fan service, but here it FEELS like fan service.  The weak sauce feel also extends to the action.  You never get the sense that the violence hurts McClane (or Jack for that matter) and there's a tremendous lack of invention at work.  The first action scene is a tedious near 15 minute car chase, and towards the end the same action beat is essentially repeated twice.  However, the problems run deeper even than this.

3: It doesn't understand the franchise it's a part of.
This is the key failing of the film.  The great strength of Die Hard (and one that has been less the case with every subsequent film, to the detriment of the series) was that John McClane was not some heroic figure; he was a guy hanging on by his fingernails - in all aspects of his life.  Here, McClane is more of a superhero than ever, okay, he's got a few scratches by the end, but he's nothing like the limping bloodied shell we see at the end of the first (and even the two subsequent) films.  If anything shouldn't he be more vulnerable at 57 than he was at 32?

McClane was also always a reluctant hero, but there is little reason for him to get drawn into this.  Yes, his son is in danger, but his son, it turns out, is a highly trained CIA operative who tells his Dad, multiple times, that he's really not helping.  McClane should be a spanner in the bad guy's works, not making the bad guy's day easier by fucking up his son's plan.  This also comes through in the script's apparent lack of knowledge about why McClane is in Russia in the first place.  He goes there, it's clear, because Jack has been arrested and is going on trial for murder, and yet he INCESSANTLY says that being caught up in the plot here is ruining his vacation.  This is how lazy the screenplay is; the screenwriters didn't even remember, or think to check, the reason McClane is in this situation in the first place.

Another thing the film fails to understand about this franchise is that McClane doesn't like violence.  McClane has tended to go out of his way to avoid collateral damage (remember how devastated he is in Die Hard 2 when he can't save a plane, and the effort he goes to in the attempt), this sits rather at odds with the big car chase here, which sees him nonchalantly driving over the roofs of occupied cars, presumably killing many people in the process.

All of this, along with Bruce Willis' disconnected performance, a terrible villain and a charisma vacuum in Jai Courtney, conspire to make this film feel very unlike a Die Hard movie.  The 'uncut' version is no help.  According to an online comparison the major change, aside from a few more F words, is the removal of Mary Elizabeth Winstead's cameo as Lucy McClane.  This is irritating.  Winstead was one of the brightest parts of Die Hard 4.0, and there's an inherent charm to her that could only have helped this film, not, I suspect, that it would have led me to alter the grade.

Ultimately, A Good Day to Die Hard is a lazy, stupid, boring badly written and shot movie that seems to have been produced by people who not only don't like Die Hard, not only don't understand it, but may simply never have seen it.  Of the three action comebacks from the stars of the 80's and 90's, this is by far the worst, largely because it feels like an insult to a genuinely great film.
★☆☆☆☆
Posted by Sam Inglis at 11:33