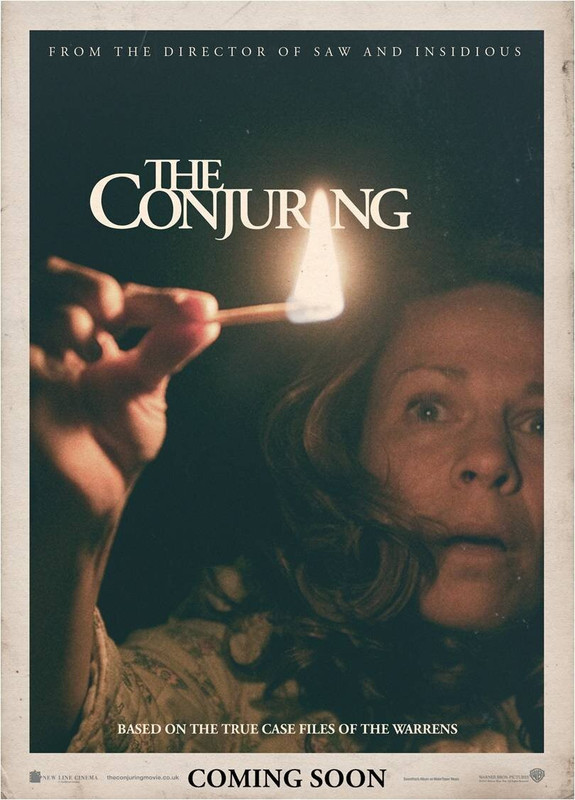 Films about possession and exorcism have now been around for a very long time, as have what I have previously termed 'noises off' horror films.  We've seen something of a proliferation of both in the past ten years, along with ever more overlap between the genres.

This latest variation on the broad themes is, like several of the others, based on a 'true' story (how true is always, as with The Amityville Horror, likely to be up for debate).  Certainly it's true that the main characters; the Perron family (Mother and Father, played by Lilli Taylor and Ron Livingston, and five daughters) and self-described demonologists Ed and Lorraine Warren (Patrick Wilson and Vera Farmiga) are real people and that the film is based on testimony about what happened to the Perrons.

The Conjuring is perhaps best described as an extremely efficient film.  It knows the beats, it knows how to hit them, in what order and how hard.  This is also the essential problem with the film because if you have, as I have, seen a reasonable amount of these films you too will know these beats and how and when the film will hit them.  Fear is a response to the unknown, and while the specific details of The Conjuring will be unknown when you walk in, the broad strokes are so established and so adhered to that it's hard to imagine the film truly scaring anyone used to horror movies.

This isn't, however, to say The Conjuring is a bad film, in fact it's one of the best of its kind for a while, thanks to strong cast and a director who, even when he's not doing anything especially new, is able to bring out the best in his actors and his visuals.

Wilson and Farmiga play Ed and Lorraine Warren as an extremely normal and rather loving couple.  The relationship and concern for each other that drives them is one thing that does make The Conjuring feel a little different, and they make it an effective undertone to the entire second half of the film.  As the Perrons Lilli Taylor and Ron Livingston also paint an effective picture of a loving long term couple in a marriage that seems to work, and again this adds to the stakes of the second half of the film as Carolyn, Roger and their five girls are all likeable and reasonably well drawn characters, so there are stakes that you can get invested in as the supernatural activity ramps up and the situation becomes more dangerous.

It's to the film's credit that, even if they don't all pay off (an implied attraction between the Warren's young assistant and the eldest Perron daughter, for instance), the film is always looking for character beats.  Some of the best it finds actually occur in the big exorcism scene, which gives real import to the central relationship between Ed and Lorraine and Carolyn and Roger.  The dynamics between the kids are quickly drawn, but the film effectively establishes some realistic, affectionate sibling relationships.

It's unfortunate, then, that most of the rest of the film treads such a familiar path.  Well grounded they may be, but the scares; creaking noises, slamming doors, the odd boo scare are the same mix of things we've seen in every one of these films, and while James Wan directs dynamically and manages to keep us from counting in every scare, I was never frightened, and nor did it appear that the audience I saw the film with was.

Ultimately the best reason to see The Conjuring is that it offers a clutch of fine performances from actors who don't get enough leading roles.  This is especially true of Lilli Taylor, who has been one of America's most distinctive and best character actresses for 25 years now, and shines in this leading part, exuding warmth as a mother and then making the last twenty minutes – which do turn the character on a dime, with little prior motivation – effective.

I don't think this is anyone's idea of brilliant or groundbreaking horror, but it's effectively made, directed with some personality, and both script and cast are at least trying to elevate what is ultimately, all told, a rather workmanlike genre exercise.
★★★☆☆
Posted by Sam Inglis at 10:28