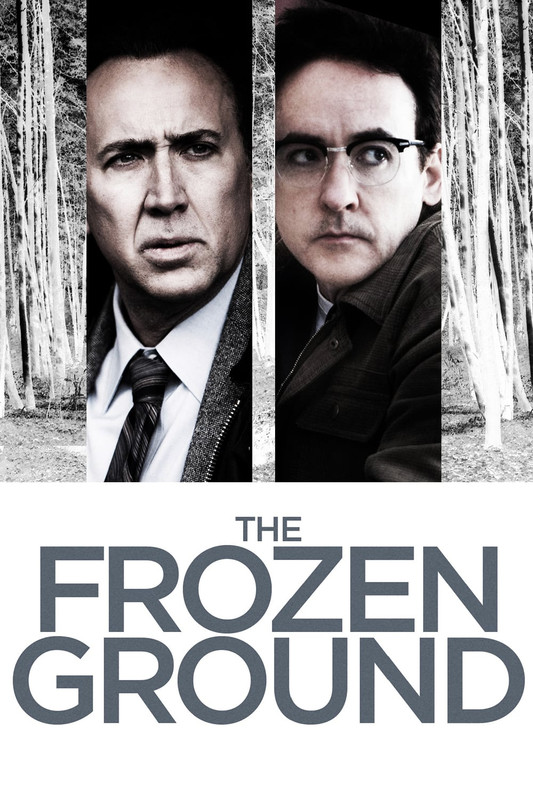 There have been many films made about serial killers. Some are pure fiction, others factually based. Some are brilliant, others godawful. The Frozen Ground takes the true story of the hunt for evidence to arrest serial murderer Robert C. Hansen (John Cusack), who raped and killed at least 17 women, killing them out in the woods in the same manner that he hunted animals, and gives it the blandest, most down the line, most completely average telling that it can muster.

This is a pity, because The Frozen Ground initially seems to have rather a lot going for it, not least an extremely eclectic cast. Director Scott Walker and his casting team have made some interesting choices with their leads, casting the two main figures – Cusack as Robert Hansen and Nicolas Cage as the Alaska State Trooper who believes that Hansen is his man as more and more missing girls fit the victim profile – very much against type. Among a cast that sometimes seems to have been assembled by throwing darts at a list are Vanessa Hudgens, as a young woman who escapes Hansen and helps the troopers, character actors like Kevin Dunn, Kurt Fuller and Radha Mitchell and Curtis ’50 Cent’ Jackson, who is also a producer here.

This eclectic cast isn't used to the film’s best advantage. Among a quality supporting cast, the talented Radha Mitchell is – again – completely wasted on a nothing role as Cage’s wife, but the major problems stem from the leads. Nicolas Cage is one of the oddest people in cinema, but he can rein that in and give intensely serious, emotional performances when that’s what the film demands. That’s certainly what this role demands, but Cage is incredibly subdued. There’s no real personality, not even really much of the intense drive that would have been needed to overcome the seeming bias that many had in believing Hansen when he denied the links being made between him and the crimes. Cage seems disengaged throughout, which is the exact reverse of what we should be seeing from him here.

Cusack is better, and there is a cleverness in his casting, or there would be if the film didn’t make it obvious from the off that Hansen is the killer. Cusack is a trustworthy presence, and that was also why Hansen, despite a nasty criminal history, was not initially taken more seriously as a suspect. He was a baker, a family man, seen as a pillar of the community, but the film only ever plays on the irony of this. Cusack does what is asked of him well, but the portrayal of Hansen is altogether too shifty too soon. Playing off the character against Cusack’s likeable persona would have been appropriate to the facts and would have added a sense of uncertainty and suspense to a film that fatally lacks those ingredients.

Vanessa Hudgens is a reasonably interesting young actress, and once again she does decent work in a rather stereotypical role. The portrayal of Hansen’s escaped victim Cindy Paulson may be very accurate, but it still feels like just one more typical hooker character, and the connection she develops with Cage is never that convincing. Hudgens does what she can with the broad characterisation and familiar situations, but it’s clear she’s better than the role. In another stereotypical role, which sticks out like a sore thumb in the film, Curtis ’50 Cent’ Jackson appears as Hudgens’ long haired pimp. He’s hilarious, entirely by accident. Jackson has absolutely no inflection, and looks like a very uncomfortable man in a bad wig throughout his thankfully limited screentime.

Ultimately this feels like a very surface treatment of Hansen’s crimes and capture. We never get deep into any of the characters and never really get much beyond the clichés of the serial killer film. After Zodiac, this simply isn’t good enough. It’s never incompetent; the story is communicated clearly, the performances are okay for the most part and it doesn’t entirely shy away from the nastier moments, but it feels perfunctory. Walker doesn’t bring any personality to the direction. There’s not a single image here that feels original, nor any stylistic choice that stamps an identity on the film. Without its classy cast The Frozen Ground would likely have landed directly on DVD, and it probably should have anyway.
★★☆☆☆
Posted by Sam Inglis at 22:01