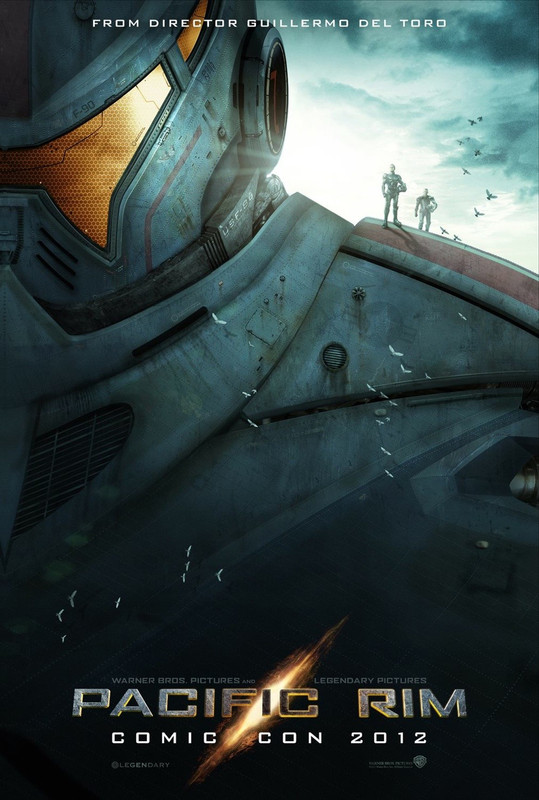 Guillermo Del Toro loves monsters, but more than that he’s interested in monsters. He sees them not simply as things that lurk in the dark to scare or kill humans but as individual beings with their own motivations and their own personalities. Until now Del Toro has used this interest, this curiosity about things that go bump in the night to tell stories that give monsters as much richness as humans. That ends here.

Pacific Rim is set about 15 years in the future. Under the Pacific ocean a fissure has opened up; a portal between two dimensions. Out of the portal have come Kaiju; giant monsters who attack the world’s cities with ever-increasing frequency. To combat the Kaiju, humans have built Jaegers; huge battle suits controlled by two human pilots whose minds are linked and in perfect sync. As the kaiju attacks ramp up the humans begin to lose the battle but head of the Jaeger programme Stacker Pentecost (Idris Elba) has a plan for one final assault on ‘the breach’. To help undertake it he recruits Raleigh (Charlie Hunnam); a great Jaeger pilot who retired when his brother was killed as they fought a Kaiju.

Precedent matters. For instance, I hated Man of Steel, but given that Zack Snyder’s previous film was Sucker Punch, it represents a significant step up.  By the same token, Transformers: Dark of the Moon may be rampagingly awful, but looks like a masterpiece next to its immediate predecessor Revenge of the Fallen. Precedent is much, much kinder to Guillermo Del Toro than it is to either Snyder or Michael Bay, and that means I expect more of him, especially given that it has been five years since his last film. That last film was Hellboy II: The Golden Army; the moment he truly integrated the depth of his Spanish language films with the spectacle and fun of his Hollywood work. It remains a high watermark among superhero movies as a whole. This probably goes some way to explaining why I hated Pacific Rim so much. From a Bay, a Snyder or A.N. Other blockbuster director it would simply have been a quite bad and laughably derivative bog standard blockbuster, but from Del Toro; an engaged, intelligent filmmaker who has previously brought great artistry to this kind of cinema it’s not merely a disappointment, it’s a travesty.

The first major complaint is one that seems to dog just about every film that costs north of $100 million: the script is terrible. I said precedent was important, and that holds true here as well. Of course the script is terrible, main writer Travis Beacham (whose initial draft seems to have had a barely detectable rewrite from Del Toro) was last credited on 2010′s insultingly poor Clash of the Titans remake. The characterisation though the film invests time in it, is feeble. Characters are sketched in broad and cliche terms; the hero haunted by loss (Hunnam); the cocky rival with daddy issues (Robert Kazinsky as Chuck Hansen); the unlikely choice who turns out to be the perfect partner for the hero (Rinko Kikuchi); the stoical leader with a line in cheesy inspirational speeches (Elba) and the ‘comic’ ‘relief’ double act (in this case scientists played by Charlie Day and Burn Gorman). Beacham and Del Toro then cram these characters mouths full of unspeakable words that sound exactly like dialogue from a cheesy blockbuster movie, never more so than in Elba’s big speech, which even Independence Day‘s President Whitmore would have asked his staff to rewrite.

The dialogue is truly abysmal, so it’s tough to blame the actors for their uniformly awful performances. Tough, but not impossible. On the plus side, Rinko Kikuchi escapes with a smidgen of her dignity, she has the excuse that English is not her first language, and also an undeniable onscreen charisma. Her fight scene with Hunnam is easily the film’s best, and says more about the characters and their connection than anything they say to one another. If Kikuchi is the best performer here, the rest continually compete to be the worst, taking a variety of approaches to the competition. Charlie Hunnam, for instance, goes for trying to be so wooden he might transmogrify into a tree. In the event, he does nothing so impressive, instead confining himself to looking a bit sad when his character thinks about his brother, and otherwise exhibiting no real expression. It would be one thing if we felt this was because he was repressing his emotions, but that never comes through in script or performance.

Idris Elba goes for another type of terrible performance; he simply seems disengaged. This can work for the right character. Harrison Ford’s almost disdainful performance as Han Solo works for Star Wars, because it establishes a personality that feels appropriate to his role in proceedings. This is not the case here. Elba's character isn’t some hired hand, he’s supposed to have spent years fighting Kaiju, rising from pilot to head of the programme, he’s supposed to have significant and different emotional investment in Mako (Kikuchi) and Raleigh and he’s supposed to be an inspirational leader. Elba is none of these things as Stacker Pentecost (seriously, STACKER PENTECOST). Terrible as the writing is, he makes his big speech even worse by delivering it with all the passion of a man being forced to speak at a corporate away day. It’s hard to assign the kind of bad performance given by Robert Kazinsky to a particular category, it’s just simply not very good. He comes across as a pouting child with daddy issues, which IS the character, but it all feels like he’s acting.

Worst of all is the desperate mugging of Charlie Day (manic) and Burn Gorman (oozy). Their every appearance lands with a mirthless thud. They seem more like a bizarre punishment from the movie gods for even attempting to enjoy this film when it’s not about big things punching each other. Del Toro can do funny – the Hellboy movies are full of humour – but this is the first time that I can recall him having pure comic relief characters, and it shows. Having the scientists treated in such an unserious manner also creates a problem, how can you then take them seriously as scientists? They are punchlines at the start of the film, then blunder their way to answers rather than discover things. Why take them seriously when they propose something? 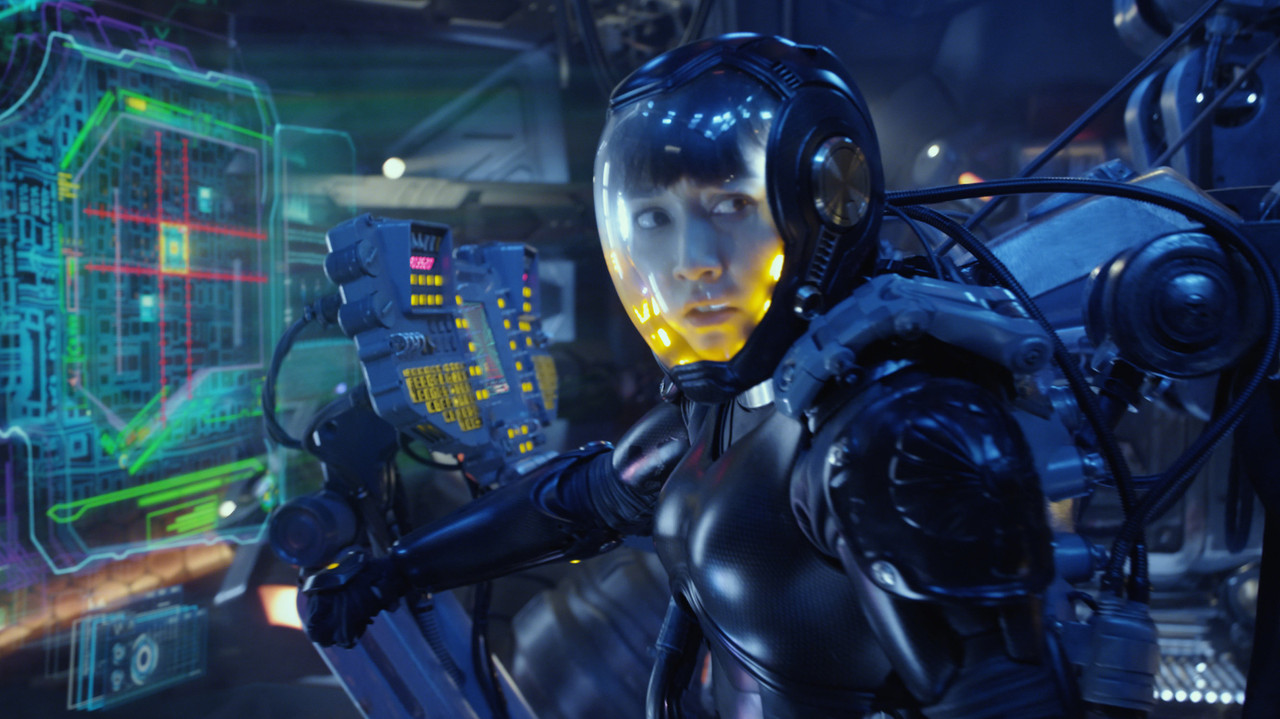 I could discount much of this if the film were fun. I’ve done this before with Del Toro; Blade II is hardly deep, and Hellboy has clear budget problems and some weak storytelling, but both are rollickingly good entertainments and both give their monsters some appreciable level of development, motivation and personality. This cannot be said of Pacific Rim, and it’s the one of the most dispriting things about the film. The Kaiju and Jaeger battles come up surprisingly infrequently, but make no mistake they are the centrepieces of the film. I feel like I say the same thing every time films of this scale come along, but Hollywood will keep forcing me to say it: if I have no emotional investment in what is behind the big special effects sequence, then why should I care about the big special effects sequence? The idea behind the mechanism of the Jeagers is somewhat cool and novel, but the film makes nothing of it beyond vague allusions to human connection. It becomes little more than a vehicle for one flashback which should give Stacker and Mako’s stories more weight, but doesn’t because of the aforementioned script and acting issues. This means that each Jaeger is piloted by very thin characters, who I barely gave a crap about and, because the larger world is seldom and perfunctorily addressed, there is little sense of the fight for mankind as a whole.

Worse is that the Kaiju simply aren’t that interesting. Any individuality they might have is broken down, top trumps like, into what category of monster they are ("it’s a category 5, the first one we’ve seen"), but even that doesn’t distinguish them much when we actually see them. Yes, the category 5 is bigger, but by much and it doesn’t seem more intrinsically threatening than the category 1 seen in the film’s pre-title sequence. Because most of the battles take place in the dark or underwater everything feels rather murky, and we get much less sense of the Kaiju than the troll in Hellboy II or the Reapers in Blade II. What isn’t very different from sequence to sequence is the way that the Kaiju fight. The Jaegers change things up a bit more, but eventually it does all boil down to, all told, a good half hour of some CGI punching some more CGI, most of it grey. This simply isn't inherently cool or exciting anymore. Spectacle in itself doesn’t thrill me, the meaning behind it does, and that’s where Pacific Rim comes up desperately lacking.

Of course the film tries to inject some meaning in the final battle, raising the stakes in the most obvious ways you can imagine. For a while it at least seems that the film will take an extremely downbeat turn, but Del Toro largely pulls away from this, in a way that feels like a series of massive, cheap, cheats. The part of the downbeat ending he does deliver on is little more than an extremely manufactured bit of sentiment, pulled directly from an even worse blockbuster, directed by one of the people I mentioned earlier.

Pacific Rim never looked like a great movie, or even a good one. Stil, I walked in wanting and expecting to like – perhaps to love – it, because it was directed by Guillermo Del Toro. I assumed it had to be sold on the fights and typical blockbusting beats, but assumed it would have more substance, after all, it’s Del Toro, there’s always more to his monsters. Pacific Rim doesn't have that. This is a disastrous patchwork of dull fights between CG puppets, unsayable dialogue, abysmal performances and bog standard (if technically impressive) visuals. That last is the final, crushing, blow. This is a Guillermo Del Toro film, say the credits, but I can hardly tell that from watching it. Yes there’s a Ron Perlman cameo, yes there are the occasional monster bits in jars, but the film as a whole barely seems to reflect its maker. It’s a sad, dreadful, disappointment from one of modern genre cinema’s great auteurs.
★☆☆☆☆
Posted by Sam Inglis at 21:52