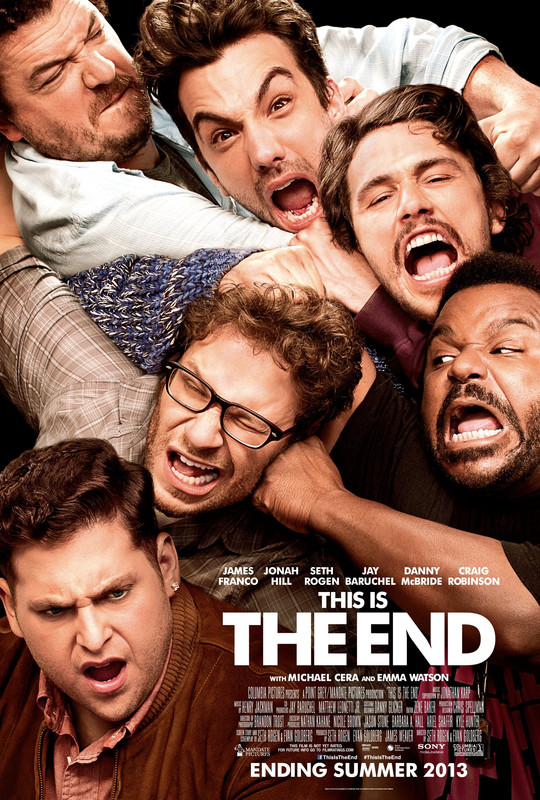 There are good and bad points to a group of friends getting together to make a film especially, it seems, a comedy. On the one hand there tends to be an easy and natural chemistry and a sense everyone is having a good time, which ideally translates over into the audience. On the other hand there is the risk that nobody knows when to quietly say that something isn’t working, or that this bit is going on too long, or that this scene we all like serves no purpose. Ladies and gentlemen: This Is The End.

The film takes place at a Hollywood party held by James Franco. Much of the current Frat Pack / Apatow stable of comedians is in attendance, notably Seth Rogen, who goes with old friend Jay Baruchel, who doesn’t like this new group of friends Seth has. Half way through the night something happens, it initially appears to be an earthquake and most people at the party are sucked into a sinkhole leaving Franco, Rogen, Baruchel, Craig Robinson, Jonah Hill and Danny McBride to face what increasingly appears to be the apocalypse together.

Ironically, the chief problem with This Is The End is that it never seems to end, and this is almost certainly down to the problem of a group of friends working together and encouraging each other to keep trying things, and keep pushing jokes. One of the chief enemies of Hollywood comedy now is improvisation, or rather the unwillingness to cut away from it. Here the indulgence and over extension of improv hammers more than a few funny moments into the ground. Most notable is James Franco and Danny McBride’s riff about ejaculation, it starts off pretty funny, but two minutes later, when the gag has been pushed ridiculously over the top, the two have more than blown their comedic load, they’re firing blanks. The film is about 50% ad libbed, and I’d be willing to bet that most of the moments that outstay their welcome fall into that category (except the Backstreet Boys cameo, though I'd hardly define them as ‘welcome’ to begin with).

These are funny people, and the film works in fits and starts, especially in the opening half hour, in which it is packed with little moments with all the people attending the party, most notably Michael Cera, here playing himself as a coke hoovering, groupie banging asshole to fine effect. Once the cast are reduced in number the film becomes much patchier, there are still some great laughs be they tiny little moments (a possessed Jonah Hill being told ‘The power of Christ compels you’ and replying ‘it’s not that compelling’) or well trailed cameo set pieces (Emma Watson is great, and should be in more of the film). Overall though, the trend is a downward spiral, and by the time that the group is making a camcordered sequel to the staggeringly overrated Pineapple Express there is the sense that they have, at least for this film, run short of ideas.

The third act, when the apocalypse sets in, is where the film falls completely apart. We’re nearly 90 minutes in by this point, and for me it felt more like two and a half hours as so few of the jokes being flung at the wall were sticking. Of the more notable third act gags one was signposted so clearly it lost any real comic potential for me and another – the return of a person who departed the film about half an hour before – is disappointing because, frankly, I thought it would have been much funnier to have someone else in the role, because it would have been so far against type. As for the final sequence, I’ve asked this before but still had no satisfactory answer; WHY do so many underwhelming comedies close out with a completely unmotivated singalong/dance number? Here it’s Backstreet’s Back, and I’m not sure I’ve wished so fervently that a group of people had not returned.

This Is The End has the inescapable feeling of being a good concept for a short which has then been brutally overstretched to fill a feature length runtime, and come the closing credits I discovered that that is exactly what it is. There are perhaps fifteen minutes of hilarity here, but that’s far from enough in a 107 minute comedy. Unfortunately that statistic does make This Is The End funnier in percentage terms than most recent Hollywood comedies, which suggests the genre is in dire need of a rethink.
★★☆☆☆
Posted by Sam Inglis at 21:25