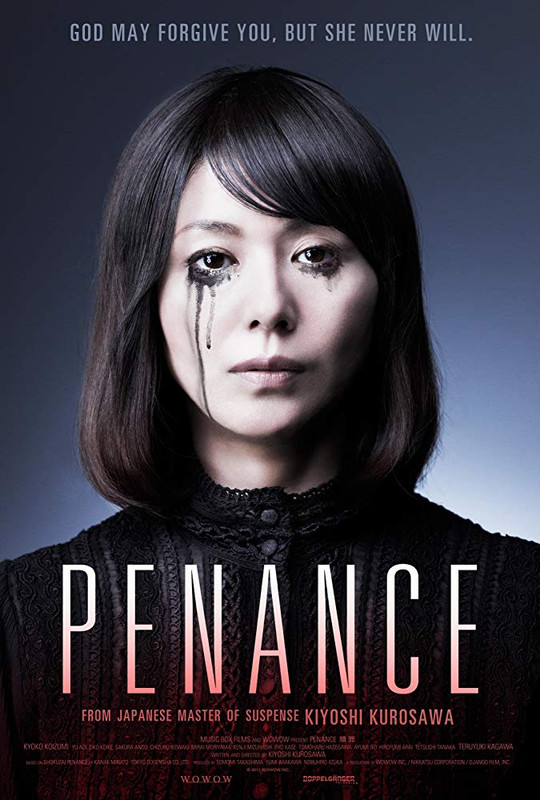 Four and a half hours is a long time to spend in a cinema, but Penance – actually a five part Japanese TV series that is also being distributed as a film – made that time pass very quickly with a gripping, tense and varied story that managed to surprise right up until the end.

The story opens in the mid 90′s, when Emiri, one of a group of five ten-year-old friends is taken away from the others by a man and murdered in her school gymnasium. The other girls; Sae, Maki, Akiko and Yuka all say that they can’t remember anything about the man who took Emiri, and six months later there are no leads. Emiri’s mother Asako (Kyoko Koizumi) holds a birthday party for her, six months on from the murder, where she informs the four other girls that she can’t forgive them for not helping catch the killer, and that in the future they will have to perform an act of penance to earn her forgiveness. The series then picks up fifteen years later, unfolding in five parts, following the four girls and then Asako in turn.

While the fact of Emiri’s murder lies underneath the whole series as a motivating factor in how each of the girls grows up, and how that affects each of their stories, the focus of most of the series is not on finding the killer or even why the girls may have held back and not spoken up about things they did remember at the time of the investigation. Writer and Director Kurosawa (working from a novel by Kanae Minato) doesn’t attempt to draw the one mystery out over 270 minutes but instead gives each part of the film its own feel, drawing from a wide range of influences, while still keeping the underlying thread tight.

The first chapter sets out the strange, dark, stall that much of the film will follow (though in differing ways and tones) with a Hitchcockian – Vertigo being the obvious influence – chiller in which Sae (Yu Aoi) is set up with Takahiro (Mirai Moriyama) who was a couple of years ahead of her in school when Emiri was killed. They eventually marry, at which point Takahiro makes many rules for Sae, including requiring her to dress as a doll every night. It’s a strong psychological chiller, with great performances from its leads, and an interesting link back to the murder in terms of why Sae accepts this as her lot.

There is a jarring tonal shift between this and the broader second chapter, in which we see that Maki (Eiko Koike) has responded to the murder by becoming a teacher and being very hard on her students. Her reaction to an intruder who attempts a mass stabbing when the children are swimming is to attack back, but the way the series treats the school politics around this doesn’t quite work, as it sometimes has a slightly overblown comic tone that undercuts the drama (never more so than in the last scene, which provokes a few accidental chuckles).

Chapter three righted the series for me, with a(nother) great performance from Sakura Ando as Akiko. On the day Emiri is killed Akiko gets blood on her pretty dress, and she takes this as a sign that she mustn’t try to move ‘above her station’. Fifteen years later she sees herself hardly as a person but as a Bear. Ando is fantastic in the part; you get a true sense of her separateness simply from the way she holds herself. She also shows the - possibly fatal - shift in Akiko’s perception of herself in a purely physical manner with the way she begins to open up when her brother returns home with his new wife and his step-daughter Wabaka (Nanaka Fujii). The third chapter also features some of the best writing in the series, combining the cold and forbidding undertone with a much more natural sense of offbeat comedy.

The fourth chapter takes a very different approach, by showing us that, unlike the others, Yuka (Chuzuru Ikewaki) is untroubled by any kind of guilt, and this twists into a black comedy of manners as Yuka reconnects with her older sister (Ayumi Ito) and immediately, brazenly, sets about trying to steal her husband (Tomoharu Hasegawa), eventually becoming pregnant. When Asako comes into these stories (as she does in each) she is usually the cold presence, so it’s a well-timed change when Yuka meets her, and offers up one of the most coldly calculated suggestions in a film that has many. Chuzuru Ikewaki walks a fine line; bright and perky on the surface, with a flinty heart beneath, but she does it extremely well, and again this is where the film gets the blackness of its comedy right.

The final chapter wraps up the mystery, and owes much to Park Chan-Wook both in feel and in specifics. It’s a convoluted tale, and one detail stretches credibility near breaking point, but the series had been compelling viewing for long enough and the other twists were unexpected, more credible, and kept unfolding and unfolding in such a way that I could forgive the small lapse. Kyoko Koizumi really carries this last chapter, and she conveys a sense of sadness and resolve that put me in mind of Lee Young-Ae’s Lady Vengeance performance.

Penance commands the attention for its whole four and a half hours, moving much faster than you’d expect given the mammoth running time. I suspect the second chapter will feel more a part of the whole on a subsequent watch; it jars because it’s the first real tonal shift. Ultimately it’s a great showcase for five clearly talented actresses (Koyzumi and Ando the standouts). It’s a consistently high quality thriller that will keep you on your toes, whether you end up seeing it as series or a film, it’s well worth a watch.
★★★★☆
Posted by Sam Inglis at 21:17