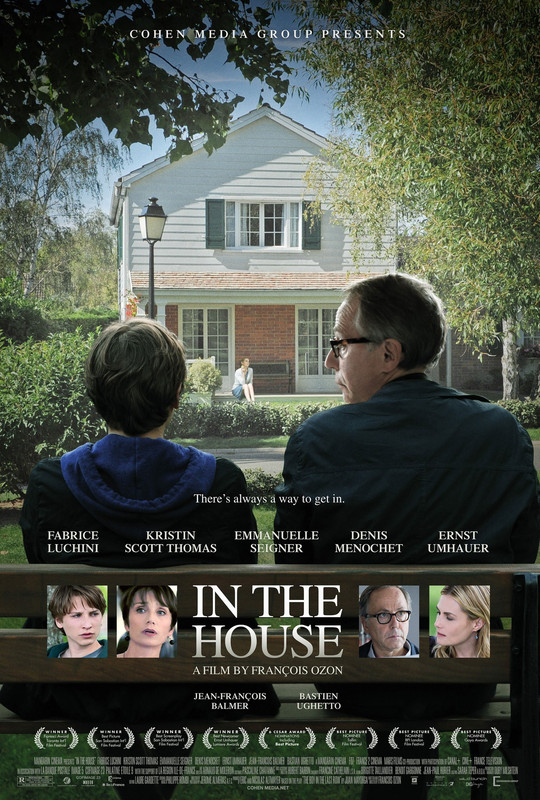 It's only right and proper that I confess my bias on this film.  If you've read the site before or met me for more than about three minutes then you probably know that I am one of the biggest Francois Ozon fans around, since seeing his feature debut Sitcom when I was 15 or 16 I've seen every one of his feature films and all but a handful of his shorts, and I love just about all of them.  This being the case, along with the fact that, like any right-thinking film lover, I'm also a huge fan of Kristin Scott Thomas, means that In the House has something of a head start with me.  That said, walking into a new Ozon film is always a little nervous making for me; he works so much that the law of averages says that at some point he HAS to make something I hate, and I'm always worried that this will be that film.  Well, Ozon has continued, with In the House, to make the law of averages look silly, delivering a mischievous film which straddles several aspects of his cinema, and finds Ozon the writer poking fun at the idea of writing.

Fabrice Luchini (who was also in Ozon's last film, Potiche) plays Germain, a French literature and writing teacher who finds himself fascinated by the stories that one of his students, Claude (Ernst Umhauer) writes.  Claude's stories are about the family of his school friend Rapha (Bastien Ughetto), whose home he has been watching for a year, and has now finally been invited into.  Germain and his wife Jeanne (Scott-Thomas) begin following the stories, and trying to predict where they will go, but the lines between fiction and the lives of Rapha, his father Rapha senior (Denis Menochet) and his mother Esther (Emmanuelle Seigner) are blurrier with each installment.

Ozon has always been his own filmmaker, but he's also one to wear his influences on his sleeve, be it Fassbinder (his favourite director, whose play he adapted for Water Drops on Burning Rocks), Demy (The Umbrellas of Cherbourg was all over Potiche) or, here, Claude Chabrol.  The class warfare that lay under many of Chabrol's films is one of the driving forces here, but while Chabrol's humour was usually quite understated, Ozon's is broader, with the jokes also forming part of the film's commentary, becoming part of what is essentially a film long joke on the audience, as Ozon plays on our tendency to try and second guess any narrative we read or watch by having Germain and his wife do exactly that, only to undercut their (and by extension our) expectations.  The influence of Chabrol is more acutely felt in the other side of the film; in its darkness, for while this is a comedy, Ozon balances it with an undercurrent of tension.  Right from the start, when we hear his first story about having watched this 'perfect' family from afar for a year, there is something off about Claude, and as he unreliably narrates the film there is a building sense that he may either write or do something very drastic.

I'm often seen complaining in reviews about how thin and how devoid of personality characters tend to be in many modern films, and that's true here of Rapha's senior and junior and of Esther.  They aren't so much rounded types as they are blanks, but this is entirely intentional and, rather than being annoying, it's one of the cleverest ideas in the film, because these aren't really characters in the traditional sense; we're seeing them as Claude and Germain do, as narrative pawns, and this is where Ozon has a great deal of fun, sometimes just winking at the audience, but sometimes outright demolishing the fourth wall, with Germain popping up in the middle of a story sequence to discuss with Claude where he is going wrong with his storytelling and characterisation.  The remarkable thing is that Menochet and especially Seigner are so good that they allow the delicate question of what is real and what is Claude's fantasy to remain very open.  Seigner's air of middle class ennui as the housewife the Raphas come home to is not uncommon or unreal, but she's also believable as the fantasy that a sixteen-year-old schoolboy might have (the fact Esther looks like Emanuelle Seigner doesn't hurt the latter impression).

Much more developed are the film's real characters; Germain, Claude and Jeanne, and Luchini, Ughetto and Scott Thomas anchor the film with a trio of fine performances.  Ughetto is brilliantly detached as the writer who seems to want to manipulate real life much as he does his stories (though how successful he is at this at any given moment is problematic to judge, because we see almost every major event framed through one of his stories), and this detachment is key to the film's tension, making it scarily plausible that the film might end up travelling in the same direction as Chabrol's La Ceremonie. 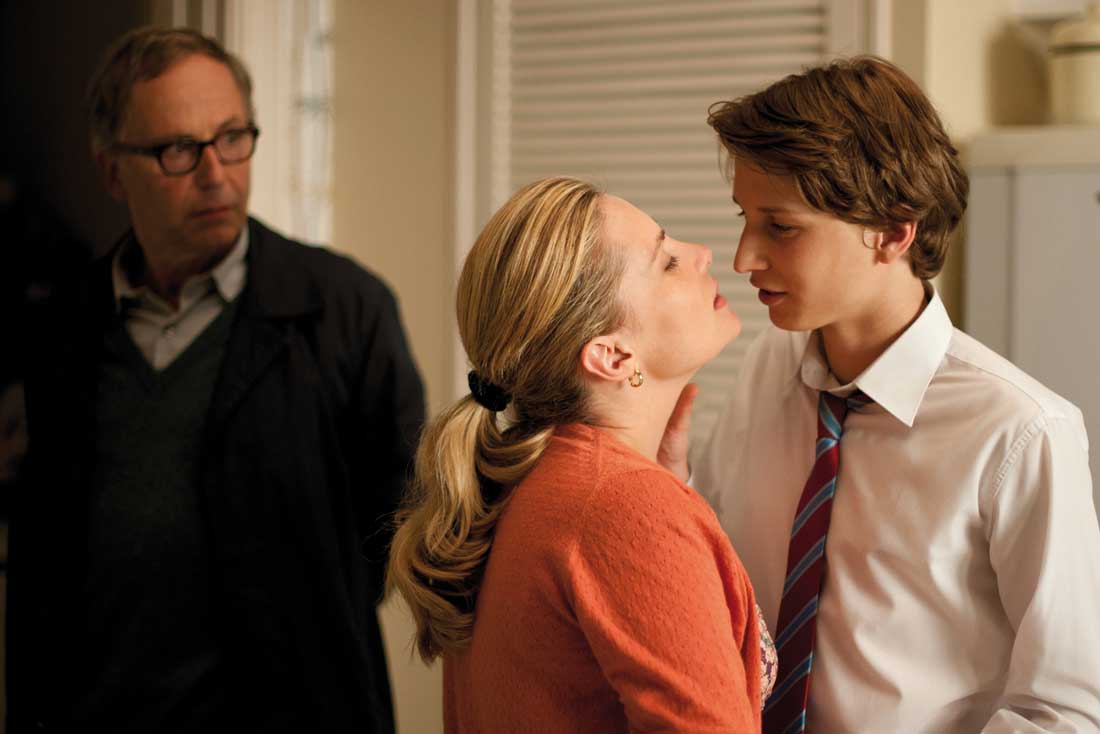 Luchini excels at playing buttoned up authority figures, and that makes the way that Claude's stories draws Germain in - beyond whatever literary qualities they may or may not have - very believable  they are as much a fantasy, and a fantasy that he embellishes more with each story, for Germain as they are for Claude (this is brought home amusingly in the few scenes in which Germain crosses paths with Rapha senior and Esther).  Germain is a somewhat pathetic figure, but Luchini doesn't play him entirely like that, more as a man who recognises his limitations (his novel isn't very good) and tries to use his strengths as best he can, but in that and in his clearly somewhat passionless marriage we see why he's drawn to Claude and to his 'characters'.  Kristin Scott Thomas, who does all her best work in French, is also excellent as Germain's ignored wife.  Ozon has great fun packing the gallery she works in with outrageous or pretentious modern art, which scores some laughs just by being completely against the grain of the scenes it appears in, and her shift from concern about why Claude is writing these stories to being drawn into the narrative is well drawn (as well as being another layer of commentary, as it will likely mirror the reaction of many people in the audience).

I've deliberately not gone into too many specifics here because there is so much that is worth discovering in this film.  Ozon fans will notice elements of his obsessions (though, strangely, no beach scene), and a colourful look and precise framing which places the visuals halfway between the garish look of some of his comedies and the starkness of his more realist films.  There is an anarchic quality to the film that Ozon hasn't embraced this readily for a while, but it's all bound up in a story that feels like it could develop into a thriller at any moment, an odd mix that is pulled off in a pretty dazzling tonal balancing act.  On leaving the cinema I wanted see In the House again immediately so that I could puzzle out what was 'real' and what was simply storytelling and so that I could laugh at all the great jokes and unpick all the layers of comment.  This may not be Francois Ozon's best film - a lofty standard - but it may well end up being his most interesting.
★★★★★
Posted by Sam Inglis at 21:30