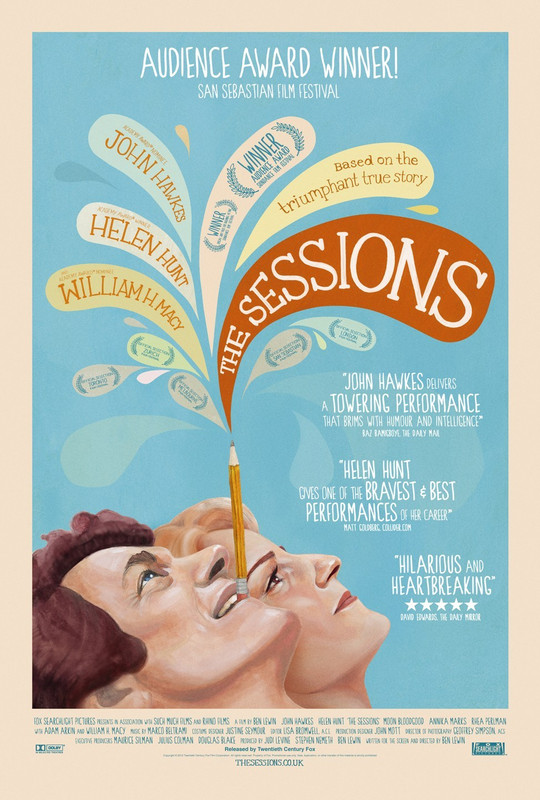 Mark O'Brien (played here by John Hawkes) was a pretty remarkable man, confined to an iron lung after a bout of polio when he was young, his mind was still completely active. He went to university and maintained a career as a poet and a journalist. This film, based on one of O'Brien's articles, is about his experiences with a sex surrogate (Helen Hunt's Cheryl); a type of therapist who introduces severely disabled people who haven't been able to have any to sexual experiences, up to and including having sex with the clients.

From the subject matter it sounds as though The Sessions could be quite sordid, or quite depressing, but while it's sexually frank and unafraid of (female) nudity, and doesn't shy away from the difficulties of Mark's disabilities it's an overwhelmingly warm and very endearing film. This is largely down to the central performances from Hawkes and Hunt.

Hawkes is, for my money, one of the best character actors around, and his performance as Mark is one of his best yet. It's one thing to turn in an emotionally affecting and subtle performance when you can move your whole body, but here everything but facial movement is unavailable to Hawkes, and he's still brilliant. Mark is a complex person, and Hawkes puts across his nervousness and his occasional bitterness just as effectively as he does his charm and his intellect. The scenes between Hawkes and Helen Hunt are perhaps the film's best, and while it's probably an extremely idealised version (not least in Hunt's casting), it's intriguing to see into this world that most of us will be happy to never have to experience.

Helen Hunt is not usually an actress I'm a fan of, but this is perhaps the best I've seen her be. She gives a totally uninhibited performance. We see how good Cheryl is at her job, and the fact that it is about much more than sex. One criticism would be that it would be good to see a bit more of her home life and how she manages the balance of this work and her happy family life, but what there is of that works well enough. Hunt exudes warmth as Cheryl, and even when the film turns toward the cliché she and Hawkes keep it engaging. There are several nice supporting performances too, from Moon Bloodgood and W. Earl Brown as Mark's aides and particularly from William H Macy, who has a very funny role as Mark's priest, who takes Mark's actions much more liberally than you'd expect of a Catholic priest.

While the performances are excellent and the screenplay is both moving and amusing, The Sessions does suffer from slightly anonymous direction from Ben Lewin. It's all very evenly lit and but for the extensive nudity from Hunt could quite easily pass for television in terms of its look. It's not a huge problem, and doesn't keep the film from being highly engaging (nor will it stop Hawkes and Hunt getting Oscar nods), but it does mean it doesn't feel hugely cinematic. Still, it's well worth seeing for the acting alone.
★★★☆☆ 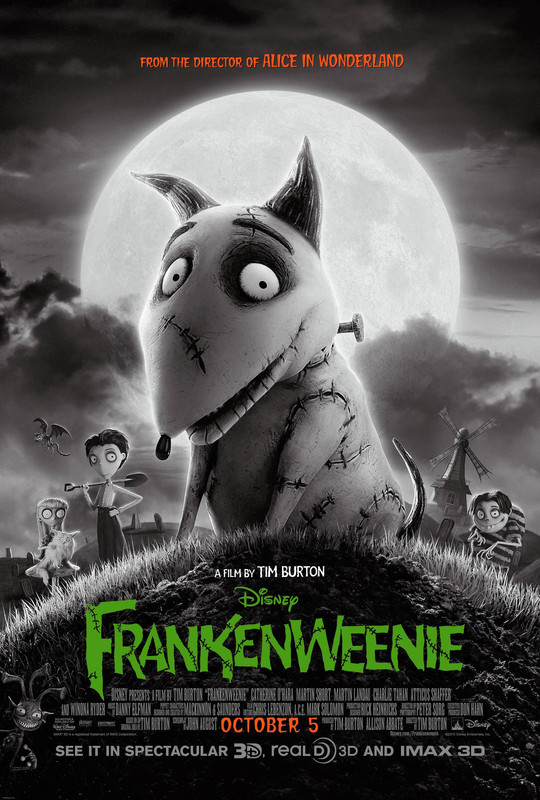 I can't help rooting for Tim Burton, even if it has been almost two decades since his last fully satisfying film, and he's seemed lately to slip into self parody more often than not. I like his early work (Beetlejuice, his two Batman films, Edward Scissorhands, Ed Wood) so much that I can't help feeling that he will at some point return to form. Frankenweenie isn't vintage Burton (except in concept, it's based on his 1984 short), but  while not a full return to form it's definitely a step along that road, and the best thing he's made for ages.

The story sees young Victor Frankenstein, the science whiz of New Holland elementary school, lose his beloved dog Sparky when he is hit by a car, after a demonstration in science class of how electricity can animate a body, Victor decides to apply this to Sparky, and raises his dog from the dead, but when some other kids from school find out and harness Victor's technology for themselves, things get out of hand.

Like most of Burton's films, Frankenweenie looks both beautiful, and like it could only have come from Burton (though, as you'd expect, the 3D adds nothing but a couple of shots where things pop out of the screen because, again, that's what's been missing from cinema, it needed the ability to point at us). The animation is excellent, the black and white crisp – though more so without the 3D glasses, which I found added a bit of a greenish cast – but the design is the real star. The characters are all pretty memorable looking, and Sparky, in re-animated form, is a great blend of disgusting and cute. Other lovely bits of design include the monsters, which have a great Toho feel to them, Winona Ryder's character Elsa, who looks like a 10 year old version of Lydia from Beetlejuice and 'Weird Girl' and her cat Mr. Whiskers, who are both so odd that every time Burton cuts to them he scores a laugh. One of the most pressing problems here is really that, from both a design and a character point of view, Victor may be the least interesting thing in the film.

There are a lot of nice set pieces here, many of which pay affectionate and amusing homage to classic horror and monster films (most notably the Universal films of the 30's). In other areas the homage becomes a little wearing, the climax of the film has been in at least one other Tim Burton movie, and close equivalents in several more, and Danny Elfman's score is gratuitous self-plagarism, taking what sounds like offcuts from his Batman and Edward Scissorhands scores and attempting to pass them off as new themes.

The problem with the structure, and this may come from the film being birthed from a short, is that as entertaining as most of them are in isolation, the set pieces feel like set pieces, not part of a larger whole. Frankenweenie comes off worse because it follows the recent Paranorman, which joined up its parts more organically, and had a genuinely emotional finale. Though I saw at least one critic crying, this film never really moved me.

Ultimately, Frankenweenie is great looking and lots of fun, but ultimately, while it's Burton's best for a while, it still feels lightweight and inessential. Fun while it lasts, but little more.
★★★☆☆ 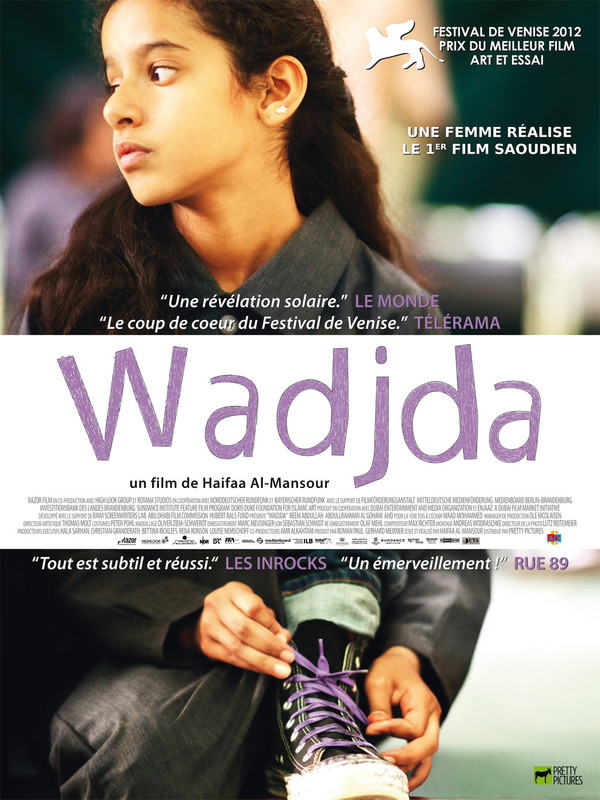 The fact Wadjda exists at all is pretty remarkable.  In the country it and its (female) director come from cinemas have been banned for more than thirty years and women aren't even allowed to drive.  The making of this film is a laudable achievement in and of itself, you could almost consider it simply a bonus that it is one of the very best films of the LFF so far, but to do so would be unfair.

Wadjda (Waad Mohammed) is a young Saudi girl - probably ten or eleven, though the film doesn't specify - she lives with her Mother in a middle class home and she's a little rebellious  she doesn't like wearing her headscarf, listens to pop music and wears boots instead of simple black shoes.  The thing she most wants is a bike, so she can race her friend Abdullah (Abdullah Al Gohani) and prove she's faster than him.  Aside from not having the 800 Riyal it will cost, Wadjda is told that girls aren't supposed to ride bikes by many of the people around her.

A lot of political films can feel as though they are essays, bludgeoning you with their message while the filmmaker yells, asking if you get it yet, and this has certainly been true of many films about the political realities of the Arab world (the heavy handed Circumstance, for example).  The real masterstroke of Haifaa Al Mansour's screenplay and direction is the way she makes the political - the film seems to me a full-throated indictment of the political situation, and especially the treatment of girls and women, in Saudi Arabia - and makes it completely personal by filtering the whole thing through a story about a girl who wants to buy a bike.

The camera essentially takes Wadjda's point of view, immersing you in her world from her angle.  It's a pretty unfriendly place to be, with a teacher (Ahd) who stamps on every expression of individuality, a Father (Sultan Al Assaf) who comes and goes at irregular intervals and a world with an incredibly and increasingly restrictive set of rules, which we also see through Wadjda's Mother (Reem Abdullah), who has to have a driver to take her and the other women who live nearby to work.

Set against all this though, Wadjda is a pretty happy film about a pretty happy character, and one who is easy to engage with.  Waad Mohammed's acting debut is one of the most naturally engaging I've seen for a long time; she gives Wadjda a good deal of spunk, as well as an open and optimistic character that allows you to believe she can knock down what are very stupid, very petty, but also very real boundaries.  Her cheeky resourcefulness is charming (as when she gets four times the money originally offered for a simple errand) and while the narrative is short on large scale drama Mohammed's performance kept me in rapt attention the whole time.  This isn't to say that the other performances aren't great too.  Without doing anything overblown, Ahd exudes subtle menace as  Wadjda's teacher, while Reem Abdullah is effective as a parent who has her own frustrations, and sometimes ends up taking them out on her daughter.

Haifaa Al Mansour's direction points to a strong naturalist talent to watch.  Her shots, all the exteriors taken on location without permission, never sacrifice composition for immediacy, but achieve both effectively, and her handling of the actors is equally strong, resulting in a film full of strong performances, and two particularly good performances from her two youngest actors.  Wadjda is a hugely effective and affecting film, and it's highly recommended.
★★★★★
Posted by Sam Inglis at 23:10