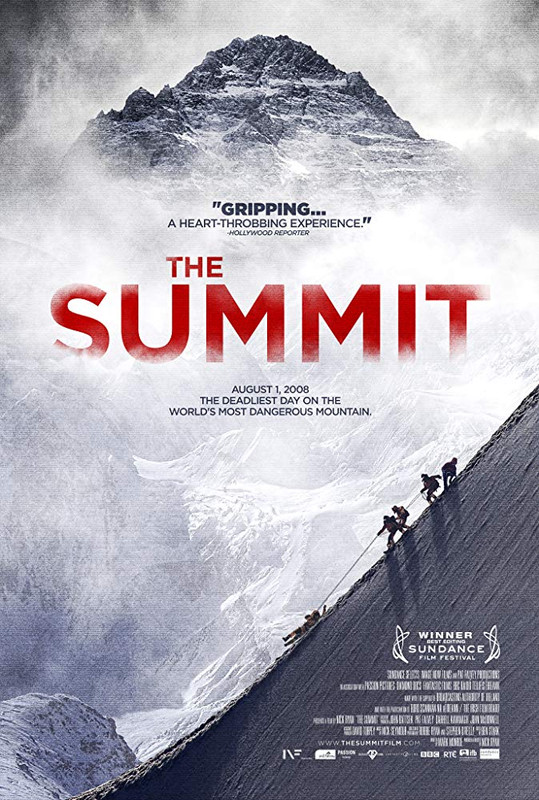 This documentary uses a blend of interviews with survivors and family members of those who died in order to reconstruct an ill-fated attempt to climb K2 in which, of a group of 22 climbers from various different expeditions, only 11 made it back to the foot of what is seen as the world's most dangerous mountain.

I was initially wary of tackling The Summit because of my crippling vertigo, and there are certainly a few shots of the view from the mountains and of people falling that set my anxieties jangling, though that's entirely proper in the latter case. My other wariness was because of the amount of reconstruction; it's not something I'm very fond of in documentary, but since there is no available footage of the events the film covers there really was no other option, and the reconstructions work surprisingly well. Director Nick Ryan does seem to have set out to use it in as journalistic a manner as possible, and thanks to some solid performances it feels like an honest portrayal of events as we understand them.

The other great asset of the reconstructed footage is the fact that the DP on those sections of the film is the supremely talented Robbie Ryan, his images really draw you in, and make a good case for seeing the film projected.

The interviews are good, with most of the key players represented in some fashion (the South Korean expedition is a notable and unfortunate exception), and there are some emotional moments, particularly in the interview with the expedition's only female climber, whose husband died on K2.

It's a shame, after all these positives, that The Summit goes off the rails in its last fifteen minutes, in which it tries to turn what was previously a straightforward documentary into a mystery. It just doesn't work, because these questions are hardly hinted at in the foregoing hour and a quarter, meaning that this last act feels tacked on and more than a little confusing. On the whole though, documentary fans and people interested in mountaineering would do well to catch this at the festival.
★★★☆☆ 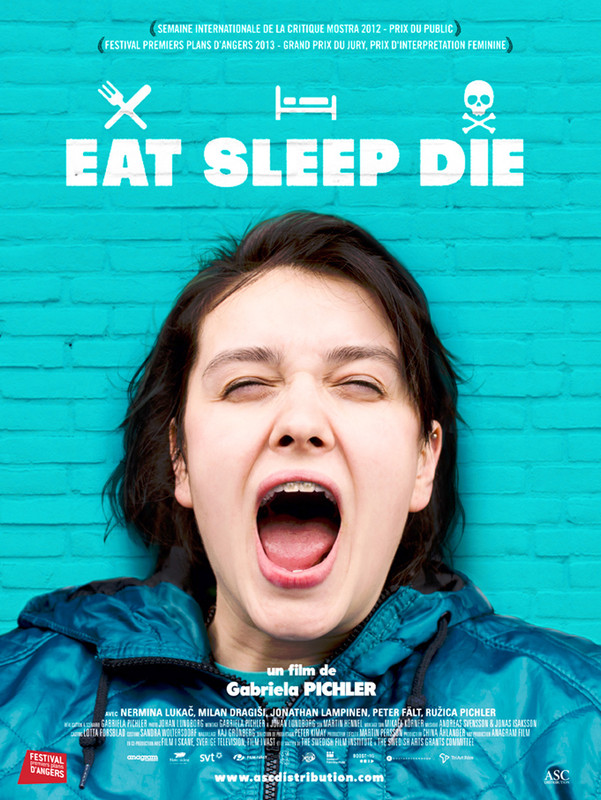 Naturalism has come in for a bit of a kicking from me during the festival to date but, happily, here is a film that gets it right. Gabriela Pichler's debut, apparently more than a little autobiographical, is a beautifully observed work which overcomes its loose and rather uneventful narrative with a commanding central performance from and a feeling of real contemporary relevance and resonance.

Rasa (Nermina Lukac) is about 20, an immigrant from Montenegro who has lived almost her entire life in a tiny town in Sweden, she's living with her Father, who is off work with back pain (which he may or may not be faking, the film is never entirely clear on this point). While her Father is away looking for work in Norway, Rasa loses her job packing vegetables at a factory, and is thrown into a bad economy where work is scarce, from a starting point of near poverty.

One young woman looking for work doesn't seem like a great deal to hang a film on, especially when the dramas are so small. There is almost nothing else in Rasa's life, she has one friend, but he doesn't seem to be a viable option as a boyfriend (when she's asked about this she says “he has to reach sexual maturity first”) and she has to be prompted into the idea off finding a hobby by the leader of her job search group. The drama is tiny and mundane, but that only brings home how beautifully observed it is. Nermina Lukac is almost defiantly unlike a movie star; she looks like any young person you might see down the job centre scanning the vacancies.

Gabriela Pichler's screenplay and Lukac's performance also make Rasa a well-rounded character, one who doesn't simply fit into one of the cookie cutter types of movie young people. She's hard grafting and determined, caring when it comes to her Father, but not incapable of being surly – in simple terms, she's a person. That's what makes Eat Sleep Die so commanding and worthy of your attention, it feels totally convincing, and that means that Rasa, as well as being likeable, is easy to invest in and identify with, certainly I've never been in the level of poverty she is, but there are many scenes here I'm familiar with, and they all convince.

Pichler's unobtrusively observational style as director is effective in much the same way as the performances; it never calls attention to itself as being a movie. This isn't to say there aren't striking images (Rasa sitting and smoking on top of a toppled over fake toadstool, for instance), nor that the film doesn't look good, but that Pichler's handheld camera doesn't shake so much that it annoys, and that she doesn't go in for that irksome trend of endless close ups.

Eat Sleep Die isn't an easy movie to sell, but of the many that have addressed it, it is one of the first to make a story based around the current economic crisis feel truly intimate and personal. This is a strong debut for a young filmmaker and Pichler and Lukac should both be worth watching out for in the future.
★★★★☆
Posted by Sam Inglis at 21:20