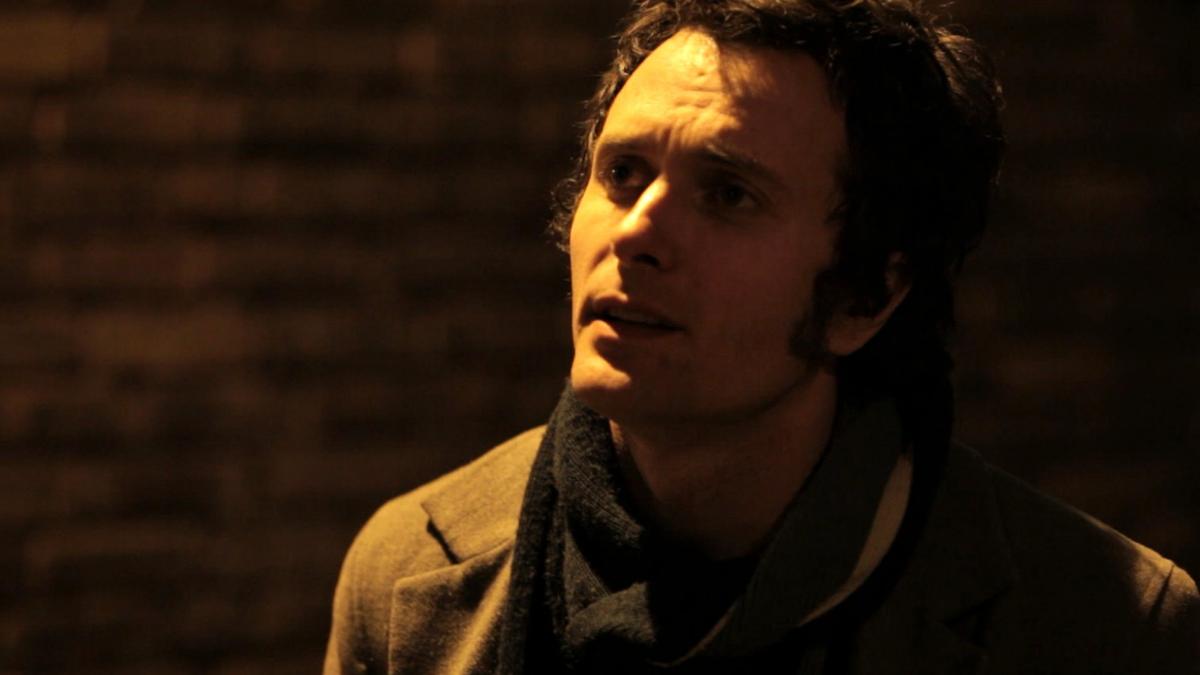 I like naturalism. Real people, real lives, are interesting, and peering into a life that you aren't leading, whether it's one you aspire to or one you are spectacularly grateful that you aren't leading, can be fascinating. That said, I think the recent crop of 'naturalistic' films I've seen in LFF screenings have confused 'naturalistic' with 'dull', because The Comedian is yet another near event free 90 minutes of people mumbling at each other in a barely emotional monotone, and I'm getting really fucking sick of it.

Edward Hogg plays Ed (everyone in the cast uses their real forename in character). He works in a shitty telesales job, lives with his flatmate Elisa and performs at open mic comedy nights (quite badly) on the side. At 32 he's restless and not sure what he's doing with his life. Aside from the fact that Ed is gay I should really be able to identify with what he's going through – after all we've all had shitty jobs to support doing what we love, and mine was in telesales – but the film is so flat, so drab, so utterly lacking in drama or engagement in itself that it was impossible to engage with. I didn't care about Ed because while he sounds well drawn on paper, and the events of the film convince as the low key dramas of a real day to day modern life, his – and everyone else's – reactions are so flat that I'm not convinced that they're really happening. The only actor who ever seems to escape this monotone is Nathan Stewart-Jarret, playing Ed's new boyfriend, but even he seems desperately under-animated in several scenes that should be really emotional.

This flatness, and the obviously, sometimes hesitantly, improvised feel of many of the scenes kept me emotionally at arms length, and the film's particular take on 'naturalism' felt forced and false to me. The improvised nature of the film may also be to blame for one of its very worst scenes; a clanging attempt at social commentary as two teenage girls gay bash Ed and Nathan on a bus. That scene, more than any other (and there more than a few others) feels like an exercise in an improv class.

Beyond this there is the problem of the film simply looking ugly. It's obviously been shot on a not terribly high end digital camera, which results in blacks looking muddy and washed out. It also doesn't help that a good seventy percent of the film is shot in the patented 'naturalistic' style of shaky hand held close ups on the characters faces; a pet hate of mine.

Ultimately The Comedian (which is, probably intentionally but irritatingly, staggeringly unfunny) is a tedious film whose 90 odd minutes feel like several hours more, and which ends in a way that is so trite that, welcome though it is, the end of the film still manages to be annoying.
★★☆☆☆
Posted by Sam Inglis at 21:03