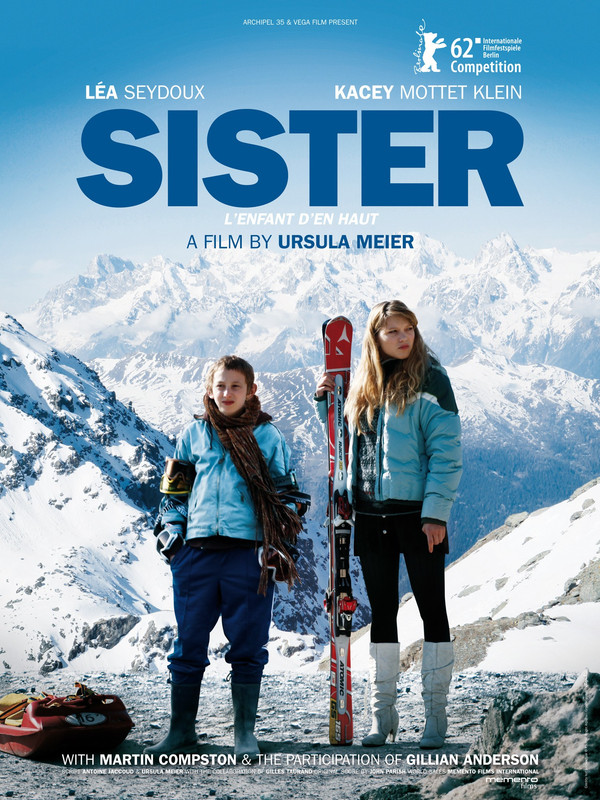 A couple of years ago I really enjoyed Ursula Meier's first feature, Home, the rather unusual story of a family who barricade themselves in their motorway-side home, so I was excited when I heard great notices for her follow up emerging from Berlin, where it won Meier the Silver Bear.

Sister actually focuses on a boy, 12 year old Julien (Kacey Mottet Klein, who made an impressive debut in Home).  He lives with his 25 year old sister Louise (Lea Seydoux) in a ski resort town in the Alps, and makes a living of sorts by stealing and re-selling equipment on the slopes.  The film has little in the way of what you'd call plot, favouring instead the slice of life approach and immersing us in Julien's life and his rather strange relationship with his sister.

The film is almost entirely carried by Kacey Mottet Klein and Lea Seydoux, and happily both are more than up to the challenge.  Klein is great as the real adult in the relationship, going out as the 'breadwinner', doling out money to Louise for household essentials and for treats, and at times even scolding her, but equally he allows us to see that Julien is still just a 12 year old kid, not entirely comfortable in this role, and still with the needs of a child (as when he bribes Lousie to let him sleep next to her, and to hug him, in one of the film's best and saddest scenes).  Seydoux is also excellent, with a difficult and deeply unsympathetic character to play she never tries to soften Louise, which is even more surprising when you add in a mid-film twist (which I guessed early on, but which still had real impact).  The two play off each other well and their difficult relationship feels credible.

Though she's not in the film for long (she has only three relatively short scenes), it's also worth mentioning Gillian Anderson, who continues to make interesting choices in her career, and is effective here as a well off English woman with a holiday home in Julien's town who befriends him on the slopes.

Sister is slow moving, but I found it a compelling and well acted character study, with coldly beautiful images from Meier and a great score by John Parish.  It also, unusually among modern films in general, ends at the perfect moment, with a silent shot which, in any other film, would likely be followed by five minutes of pointless, talky, clarification.  That last shot is all we need to know, and Meier has the great instinct to roll the credits.
★★★★☆ 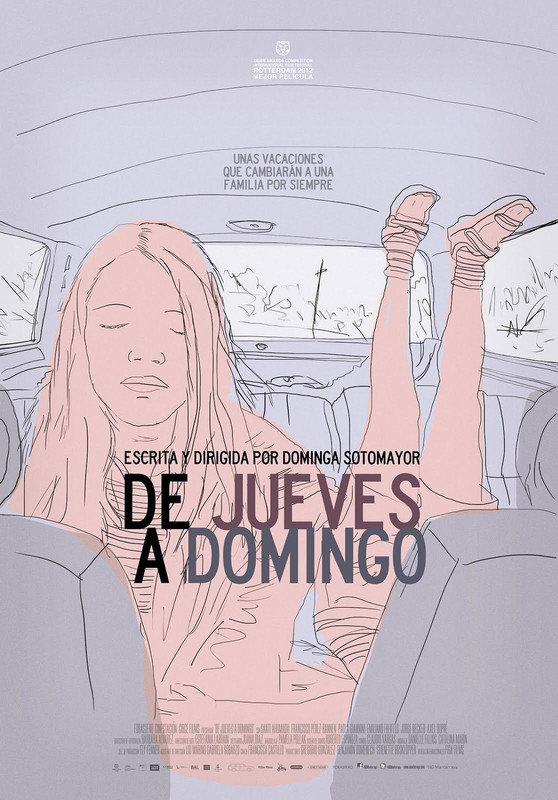 The festival hasn't even begun and already, with this and the totally insufferable Here and There, I've seen two Latin American films (this one is from Chile rather than Mexico) about fractious families in which absolutely nothing happens very, very slowly.  Thursday 'til Sunday wins a few points because it is just 80 minutes long, this, however, does not keep it from feeling longer than Love Exposure.

The premise is simple: a family of four; mother, father and their kids, Lucia, who is about 10 and her younger brother Manuel set out on a road trip, they are going to camp for a night with another family (I'm not certain whether they are friends or relatives) and then look at a parcel of land that the father has either bought or inherited (again, the specifics are a bit hazy).  Along the way we are supposed to get the idea that the relationship between the parents is fractured, but this is one of many things that writer/director Dominga Sotomayor renders in tones so muted they are all but absent.

The film is reasonably well observed in the way it shows two parents coping with kids who are active and bored on a long car journey but, admirable though this realism may be, it's not all that interesting and for about 50 minutes there is literally nothing happening besides the family driving to meet the family they are going to camp with.  When they finally arrive the film threatens to become more interesting, but Sotomayor's bitty structure and continued resistance to things actually happening soon kills that possibility.

A few scenes are charming and a few shots evocative in and of themselves, but they never add up to  much and, come the one big dramatic moment in the film, the muted build up backfires, as it seems to arrive out of nowhere.  There is ambition here, and some decent acting, especially from Santi Ahumada as Lucia, but the end result is deathly dull.
★★☆☆☆ 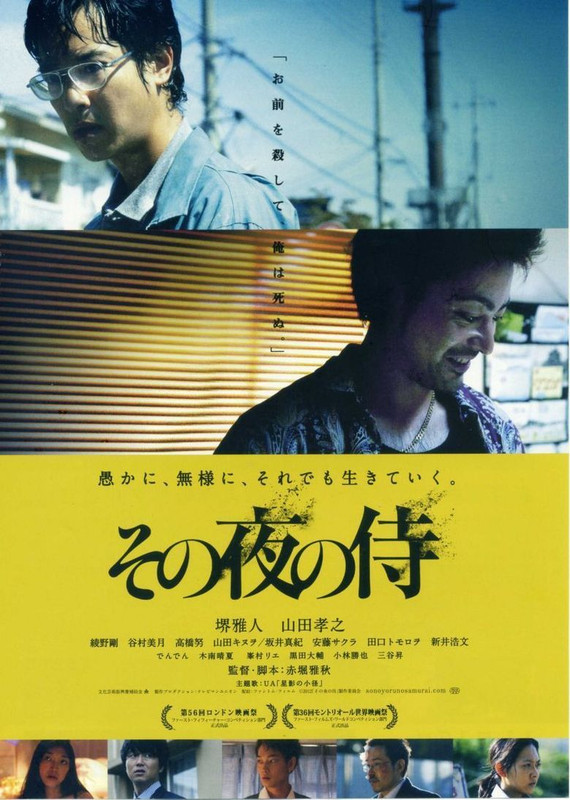 The first film by playwright Akahori is based, perhaps inevitably, on one of his own stage works.  Knowing that you can see it in the structure of the film; two alternating storylines which tend to unfold in reasonably long scenes which tend not to move from set to set, but Akahori has enough of a grip on the language of cinema that it doesn't feel obvious while the film is playing.

The Samurai That Night has, admittedly, a bit of a head start with me, because I love and am fascinated by vengeance movies of all kinds; I've seen some that are insanely visceral, other that are much more psychological.  This being a Japanese film, and given its title, you might expect stylised violence and blood being hosed across walls, but for the most part it's much more psychological, and more a film about grief than vengeance.

Ken's (Masato Sakai) wife is killed by Kijima (Takayuki Yamada) in a hit and run accident.  Five years later Ken is still a shadow of himself, spending most of his time outside work sitting alone, eating potted custard deserts and listening to his wife's last answerphone message over and over.  Kijima is out of prison, and has been receiving letters he assumes are from Ken saying that on the anniversary of the accident the sender will kill Kijima and himself.  Kijima reacts to this by violently trying to discover who has let the secrets of his past come out.

This is a film of two halves which only collide in the last fifteen minutes of the film's roughly two hour running time, and up to that point screen time is divided reasonably equally between Ken and Kijima, for me the big flaw with the film comes from Kijima's side.  There are really two problems; first that Kijima is something of a cartoon bastard in a film that otherwise feels rather more real - odd, but real - than that and secondly that there is quite a bit of repetition in his scenes as he beats up one person after another, acting out as the countdown ticks away to the anniversary.

Ken's side of the film is much more satisfying.  I found Masato Sakai's performance as a man still in the very depths of grief very convincing and deeply sad.  I also appreciated the film's black humour in these scenes, especially a very awkward blind date.  Perhaps the best scene in the film takes place the night before the day of the anniversary, when Ken goes to visit a prostitute (played by Love Exposure's Sakura Ando), but can't perform and so talks as she sings karaoke (Ando has a very pretty voice, which bodes well for her other LFF role, in Takashi Miike's musical For Love's Sake).  It's a scene that really encapsulates the film's mix of tones; it's funny, beautifully acted, sad, and informs the vengeance story.

The vengeance movie part of The Samurai That Night doesn't go the way you'd expect, and that makes for a genuinely unusual and interesting ending to a film which could very easily have been building to something much more hackneyed (fun, but hackneyed).  This is a flawed film, but it's certainly an interesting and different one, and one I'm interested in revisiting.
★★★☆☆
Posted by Sam Inglis at 22:50