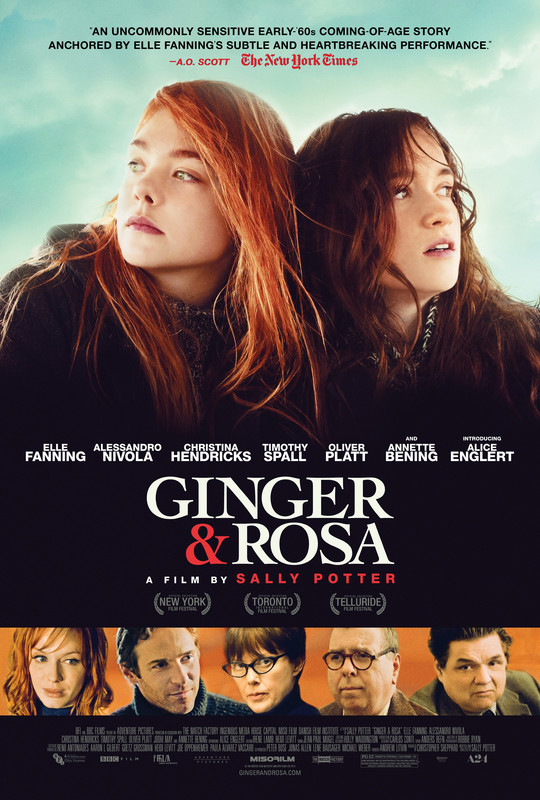 Sally Potter's latest is the very definition of a mixed bag. There are some excellent things here, but unfortunately they are wrapped in a film that is terribly inconsistent, full of baffling decisions and things that feel unfinished.

Ginger (Elle Fanning) and Rosa (Alice Englert) are two girls of sixteen, born on the same day in 1945 and best friends all their lives. In 1962, however, they begin to drift apart as Rosa becomes interested in boys, while Ginger's attentions are taken up by what, she's convinced, is our impending nuclear destruction.

This could easily be an effective coming of age story, and there are snatches of that movie in here, but Sally Potter muffles it, burying the essential story, and thus much of the connection we should have to the characters and the plot under a fog of stylistic choices that really didn't work for me. On the plus side the film often has a lovely, dreamlike, feel, which contrasts nicely with the grimier visual moments (this is the early 60's, and neither family seems well off), but while it often looks good, the style often gets in the way of the storytelling and the character study to which Potter seems to aspire here.

The film is cut almost as a series of ellipses, and this means that many scenes feel like incomplete thoughts. You get the idea of, say, the scene in which Rosa comes boating with Ginger and her Father (Alessandro Nivola), but though the series of images is pretty, and what Potter is doing with them obvious (largely because it's been obvious for some time, perhaps unintentionally) these 30 silent seconds feel like the start of a larger scene now residing on the cutting room floor, in which we could have added to the character aspect of the film. This is just one example of many, the film continually frustrates by cutting in and cutting away when a scene seems to be in the middle of a thought.

The limited dialogue serves Elle Fanning well.  A consummate young actress – at this point surely the best of her young generation – she's adept at conveying great emotion with just a tiny alteration in expression. She also seems to have a tremendously malleable face, in some scenes she seems incredibly childlike (at shooting she was three years younger than her character), and in one, after Ginger is arrested at a protest, she seems old beyond her years. Fanning's remarkable performance also extends to a fine English accent, and an ability to nail any tone, from the carefree scenes of the girls in the early part of the film, to a climactic meltdown.

Fanning and the rest of the actors are battling a mannered script, which gives them a lot of very scripted sounding dialogue to wrestle. Many of them lose, but none so totally as Christina Hendricks, who is hilariously miscast as Fanning's Mother, and concentrating so hard on her (shockingly awful) accent that she has completely forgotten to act. On the plus side, her lines when she serves Nivola a pie are perhaps the funniest of the festival so far, entirely by accident. Alice Englert makes a creditable debut, but in terms of screentime as well as impact she is overshadowed by Fanning. Alessandro Nivola does what he can with a completely unlikeable and often irritating character, but the supporting cast does offer some highlights in the form of Timothy Spall and Olvier Platt as Ginger's two godfathers – a film about their relationship during the war might be worth a watch.

Ultimately, Ginger and Rosa is a frustrating failure. You can see the seeds of a really fine film here; the images are often beautiful, there are some strong performances, including a great lead and the character arcs are inherently interesting, but it's so patchy, and when it falls flat it can test your patience with its desperate pretensions to art. In a more focused, less elliptical, version I can imagine liking this film very much, but as it stands I can recommend Elle Fanning's performance, but not the film.
★★☆☆☆ 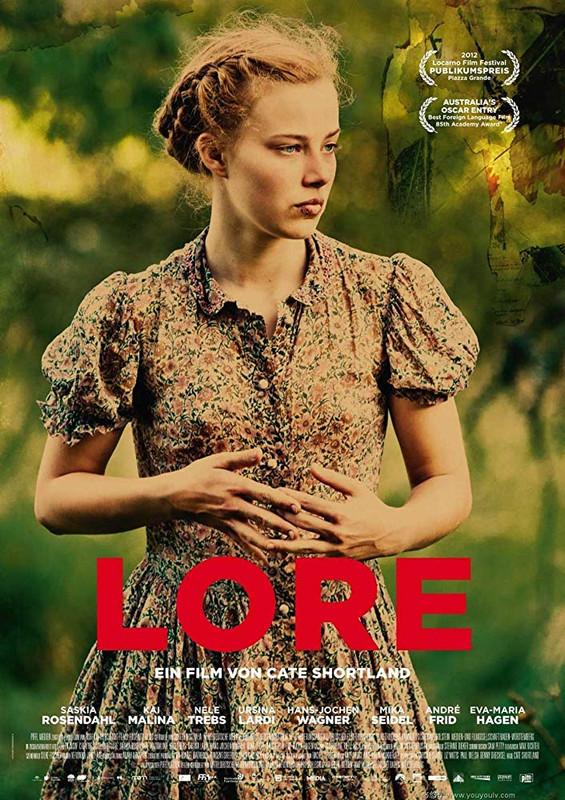 It's been a long wait for fans of Cate Shortland's first film, Somersault (I was not among them) for her second feature.  Lore is certainly not what I expected Shortland to deliver next, at least in concept.  Acted entirely in German, it's a second world war story told from an angle we don't often see.  Just after Hitler's death, and the end of the war Lore's (Saskia Rosendahl) Father comes home and instructs Lore, her Mother (Ursina Lardi) and her siblings to pack essentials and things they can barter, because they are leaving the home, Lore's family are Nazis, and the allies are now rounding up war criminals.  Soon Lore's Father disappears, and her Mother opts to hand herself over to the allies rather than be arrested.  This leaves Lore to take her younger siblings - 11 year old sister Liesel (Nele Trebs), a brother of about ten, twins about seven and baby Peter - on a long and dangerous walk from the Black Forest to their Grandmother's house in Hamburg.  Along the way they are aided by a concentration camp survivor; Thomas (Kai Malina).

The difficulty with Lore - both character and film - is one of sympathy.  Can we have sympathy with these characters?  We obviously can't with the parents, and the younger children haven't been raised with anything but Nazism, and they at least develop some acceptance of their eventual Jewish travelling companion.  Lore herself, however, is more problematic.  We can see where her opinions come from, but given that she's about 18 is that enough to allow us to sympathise with her anyway, as she frequently abuses the person who is helping her family ("You're a liar, just like all filthy Jews").  I really struggled with this.  It would help if Lore had more of a character arc but, aside from a rather impressionistic rejection of her Grandmother and Mother, she seems essentially to be the same character as the closing credits go up as she was as the film began.  Ultimately, excellent though Saskia Rosendahl's performance (her film debut) is, and welcome as any degree of moral complexity is, I felt that I was left emotionally at arms length from the film, because I couldn't really engage with and root for the main character in the same way as in, say, The Way Back.

That difficulty aside though, Lore has much to recommend it.  Shortland and her young DP Adam Arkapaw (who also shot Snowtown) give the film a pastoral beauty which contrasts with the harsh realities of the story, though the amount of soft focus close ups on nature or on Lore does get a little tiresome and begin to make the film feel a touch padded at just under two hours, however beautiful the individual shots are.  The performances are excellent all round, and the tension between Lore and Thomas, sexual and racial, is especially well played by Rosendahl and Malina.  Of the other siblings only Nele Trebs and Andre Frid (as ten year old Gunther) have especially developed roles, but the family dynamic is convincingly played.  It's a bit of a shame that Ursina Lardi has only a small role as Lore's Mother, she's well cast (one shot seems to show Lore trying to dress and make up like her Mother, and the resemblance is pretty startling) and her hard edged and unapologetic character is interesting.

The journey is engaging throughout, and while the film does unfold, as these long walk movies tend to, largely as a series of encounters and individual scenes, it also manages to spring a couple of genuinely surprising twists.  Shortland's decision to shoot the film entirely in German is also especially welcome, as it surely makes for far better performances from her cast, and because this is a specifically German story, and would likely ring far less true if it had been played, whether by German or American or British actors, in accented English.

I have reservations about Lore, but the story grips, the performances are all strong, and it is lovely to look at.  It's well worth a watch, get back to me when you've seen it, and we can talk about the issue of emotional engagement.
★★★☆☆
Posted by Sam Inglis at 21:34