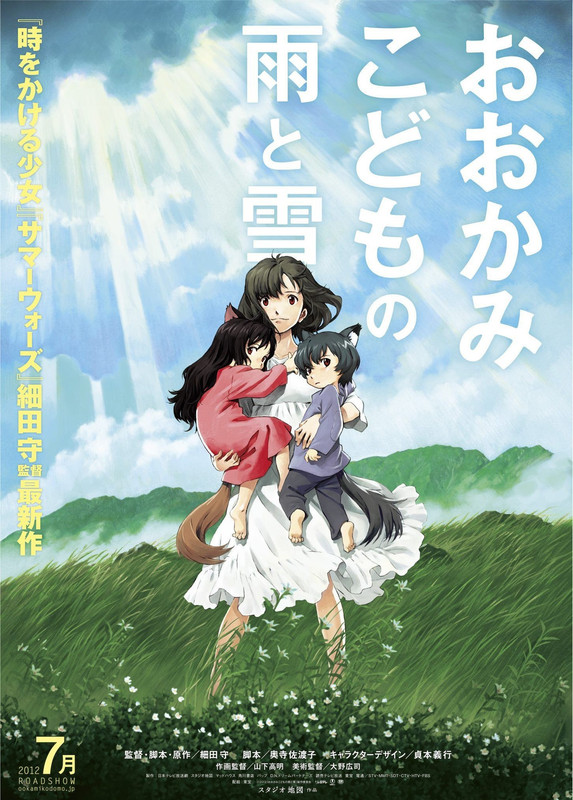 Over the course of his last two films (following his debut as one of the directors of the Digimon Movie) Mamoru Hosoda has established a place for himself as one of the true auteurs working in anime, and for my money in cinema as a whole. Wolf Children shares few specifics with either The Girl Who Leapt Through Time or Summer Wars, but the look and the feel of the film is unmistakably Hosoda.

The film is narrated by Yuki, who tells us the story of how her Mother, Hana, met her Father, who was a wolfman (distinct from a werewolf, the film tells us that the full moon changes and the attacks on humans are simply myth) at university, how they fell in love and had two children; Yuki and her younger brother Ame, and how after her husband died Hana moved her half wolf kids to the mountains so she could raise them freely.

Where this film shares DNA with Hosoda's previous work is in the way it freely mixes the magical and the mundane, and uses them to tell a real feeling and emotional story. Wolf Children may be the title, but the film is really about Hana and her efforts to be the best parent she can to these unusual children. Over 110 minutes, Hosoda's film moves slowly, but hypnotically, through about 14 years as Hana and her children grow. The fact that Yuki and Ame can both turn into wolves at will (and sometimes by accident, when she's very small Yuki changes when excited, and when she's older, once, when she's angry) is really just a metaphor for childhood issues, just as the different ways that each of them deals with the choice between their wolf side and their human side are expressions of how we all decide who we are as we grow up. Hosoda's take on these universal themes, rather than the fantastical elements of the story, are what really make the film.

The three central characters all feel very real. Yuki, the excitable little girl, who grows up and changes much more than a lot of live action characters do in movies, is our point of identification, and the animation and the voice acting (I can't be specific about who plays which role, because IMDB isn't) combine to make a detailed and charming character as Yuki tries to repress her wolf side and be more human, so she can fit in at school, perhaps especially around the new boy. By contrast we see Ame come out of his shell as he grows up, and while Hosoda highlights the differences between the two (once in a pretty visceral fight), he never beats you over the head with his metaphor.

Hana's story is, however, the centre of the film, and it's a beautifully told, acted and animated one. In a lot of ways Wolf Children reminds me of Francois Ozon's Ricky, largely because both films are attempts to tell an emotionally realistic story about a woman and her attempts to raise an unusual child (in the case of Ricky a baby with wings). If there's a major criticism of Wolf Children it is perhaps that Hana is too idealised, from the wide-eyed college girl who meets a wolfman through to the totally dedicated parent, learning to let go of her children, she's so good and so endearing that it could come off as one-dimensional. I never felt that. I was invested in Hana from the beginning, and I found myself sympathising with her struggles (her first attempt to learn to grow her own food, for example), and cheering her triumphs. By the end of the film; an excellent set piece which brings all three storylines to a head, and cross cuts quiet moments between Yuki and her school friend effectively with a frantic, storm lashed, Hana, I was completely emotionally engaged, and I'm not ashamed to say I cried a little.

Hosoda's films are always beautiful, and Wolf Children is no exception. The character design is especially great, particularly in the way that the children still feel like they are themselves when they are in their wolf forms, and the way all three main characters age across the film, especially subtly done in Hana's case. The animation is dynamic and high quality, packed with detail and nuance; this never feels like something made for small screens (though, sadly, that is how I had to see it).

This is a difficult film to write about, because for most of its running time it quietly documents the day to day life of this family. It doesn't have any large scale action, there's no villain, no outside conflict, but Hosoda makes you care about these characters, and makes you see that this isn't a film about wolves; it's about people. Now four films in, Mamoru Hosoda has three great movies under his belt. I urge you to see this one, it's likely to be one of the stranger and more welcome treats of the festival.
★★★★★
Posted by Sam Inglis at 11:09