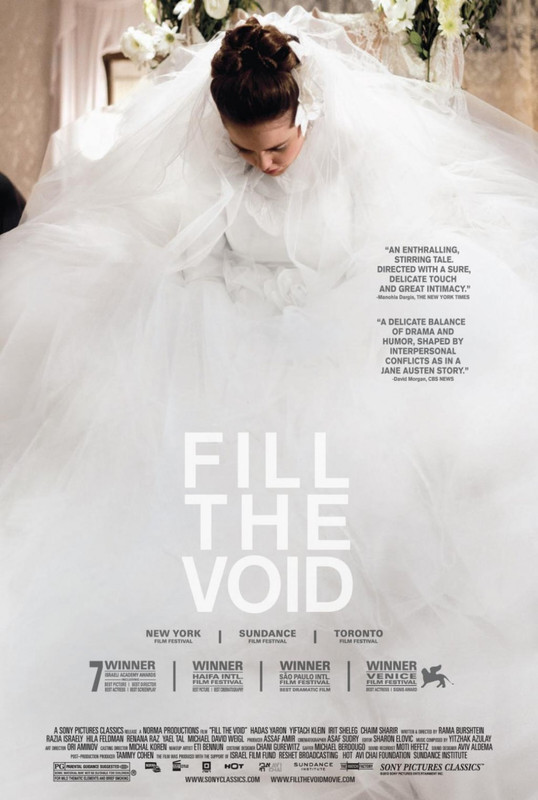 Cinema is a great way, I find, to gain insight into cultures you don't know anything about, and certainly for me that's true of the ultra-orthodox Jewish community in Israel. Fill the Void doesn't, unlike many films from this part of the world, concern itself with the larger politics of Israel, rather it's a film that concentrates hard on a single family.

When 18 year old Shira's (Hadas Yaron) older sister Esther dies in childbirth she leaves a young widower in husband Yochay (Yiftach Klein) and a new baby behind. The whole family is grief stricken, but soon Yochay is looking to remarry, to a woman in Belgium. Distraught at the idea of losing her daughter and her grandson in quick succession, Shira's Mother hits on the idea of arranging for Shira and Yochay to be married, but Shira already has her heart set on another match which her parents have been working on for some time.

Fill the Void is an interesting film in the stance it takes on the things it shows and implicitly discusses. I'm generally in agreement with the opinion that fundamentalist religion is not a good thing, but it's interesting to see a film look at a strictly religious community and present them in a sympathetic light, which is something few movies have done of late. One of the great strengths of the film is that while director Rama Burshtein provokes many moral questions she doesn't seem interested in dictating the answers to us, nor in giving us 'heroes' and 'villains' to cheer and boo. I walked in expecting a grim film about a girl being bullied into an arranged marriage (we've seen a few of those over the past few years), but the even-handedness of the film, the fact that it allows both Shira's parents and Yochay to be rounded and sympathetic characters, is its most interesting facet.


Hadas Yaron is excellent as Shira, and she's well-matched by Yiftach Klein as Yochay, both of them quietly trying to negotiate their grief at the loss of Esther and to figure out how they feel about each other and the idea of marriage. Fill the Void is less a title about feelings than it is about duty, but the performances remain subtle enough to allow that idea to be advanced with rather more subtlety than you might expect.

The film's downfall is that, even at only 90 minutes, it can feel a touch padded, as we get several iterations of many scenes, a few scenes that run rather longer than they need to (a Godfather like scene of people coming to Shira's Rabbi father for help) and a few detours that, while they are good scenes in and of themselves, don't add a lot to the film (a sub-plot about an unmarried friend of Shira's, for example). That's not to say that first time director Rama Burshtein doesn't do many things right. There's an intimacy to the film, particularly in the tight framing of the most fraught scenes between Shira and Yochay, which is very effective, and there are many memorable images, especially the closing frames, which are haunting in the questions they pose.

Ultimately Fill the Void might have made a great short, but it's a very solid feature film, and held my interest with its interesting and well told central storyline.
★★★☆☆ 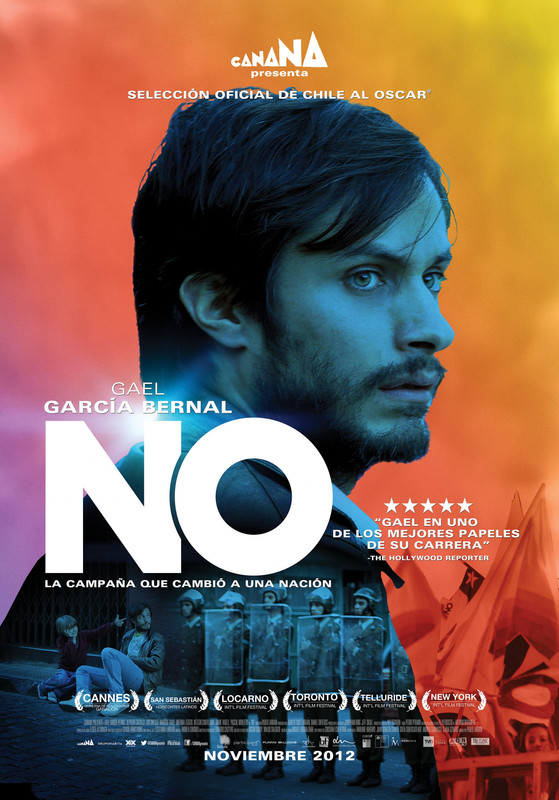 The final entry in Pablo Larrain's trilogy chronicling Chile under Pinochet is much easier for an outsider to engage with in political terms than Tony Manero was (I've not seen the middle entry, Post Mortem). It's the story of the 1988 referendum in which Pinochet was forced by outside pressure to offer his people a simple choice; Yes or No on eight more years under his rule. Larrain focuses on the advertising efforts, with Gael Garcia Bernal playing the head creative on the No campaign, and his regular collaborator Alfredo Castro as the man tasked with heading the advertising effort for the Yes campaign.

For someone like myself, who knows almost nothing about Pinochet and his rule, No is both fascinating and thrilling. I wasn't aware of how and when Pinochet was ousted from power, and so the film also worked as a thriller of sorts, gripping tighter as the date of the referendum looms over the film. There are a few well told personal stories here, notably of Bernal's relationship with his ex-wife (Antonia Zegers) and young son, and of the strain on his working relationship with Castro's character, who, in day to day life, is his boss at an advertising agency. A scene late in the film in which Bernal and Castro, days out from the vote, come back together to pitch a campaign for a soap opera, bristles with tension.

The performances are excellent all round. Castro is barely recognisable from his Tony Manero character, and Bernal, for all his much remarked upon movie star good looks, has a terrific everyman quality about him which pays dividends. There is a simplicity and directness to the acting which allows the film to convince almost entirely as something which we're watching as flies on the wall at the time.

The authenticity of the film is added to immeasurably by the way that Larrain has shot it; in 4:3 ratio, with TV cameras of the time. He's clearly cutting in a lot of genuine footage from the time as well, and while this all adds up to create verisimilitude, I'm not entirely convinced by the choice Larrrain has made here. First of all this carefully crafted verisimilitude is more than a little undermined by casting people like Bernal, Castro and his Tony Manero co-star Amparo Noguera (in a small part). In this context they can't help but remind you that you're watching a film. There's also a bigger issue of the fact that the choice of vintage cameras means that Larrain's frames are lacking in visual detail; they're hazy and heavily pixellated at times, and frankly it's just not pleasurable to watch, and audiences who don't know how the film was made may well complain because it looks so low quality compared to what they are used to. I understand what Larrain is doing here, and in terms of plunging us into the time and place it works, I just think I'm a sophisticated enough cinemagoer, as are most people, not to allow the fact that something doesn't look like it was shot on bad equipment in 1988 shake me out of the period.

Ultimately though, this is a minor caveat about an excellent and engrossing film, which tells us a lot about a time, a place, and a set of ideas without feeling like a history lesson. No is engaging, sometimes blackly funny, always fascinating, and well worth seeing.
★★★★☆ 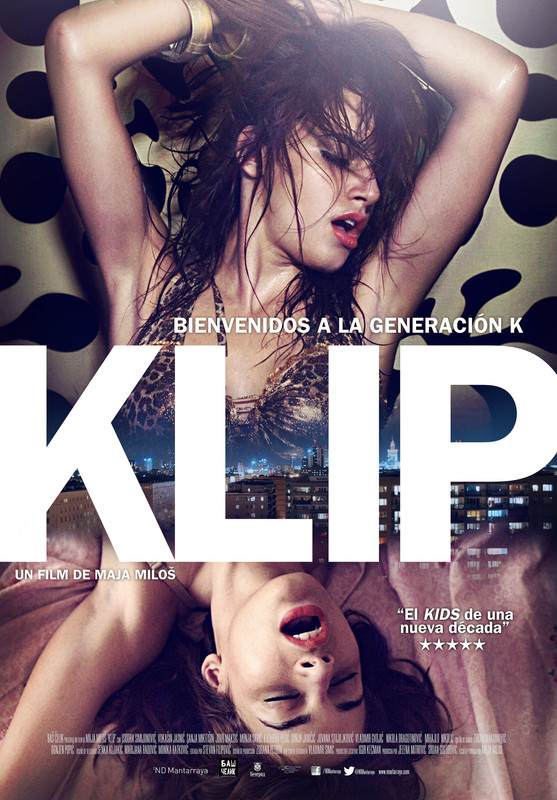 A few years ago at the festival I saw a great, bleak, coming of age film from Russia called Everybody Dies But Me, and since then I've seen many good teen and coming of age films from all over the world at LFF. I was hoping that Clip would be this year's addition to this catalogue of films.

Jasna (Isidora Simijonovic) is about fifteen; a rebellious girl discovering boys, especially schoolmate Djole (Vukasin Jasnic) and railing against her home life with her long-suffering Mother and dying Father. She films many of her escapades, sexual and otherwise, on her mobile phone. That is about it as far as story goes in this film, it's really little more than a series of depressing and often explicit vignettes, and struggles to add up to a real story. Even plotlines that feel as though they might pay off, like the impending operation that Jasna's father has to have, end up being cul de sacs and are left dangling at the end of the film.

I'm used to teen movies from outside the US being bleak and harsh – it's one of the things I admire about them, because my own impression of being a teenager was that it was horrible, and I never really saw that reflected in the teen movies I saw when I was that age – but it just feels like Maja Milos, Clip's young director, has gone so hell for leather for 'depressing' that her film no longer feels honest.

I understand, of course, how important sex is when you're a teenager and just discovering it, but even then, people have conversations and thoughts that don't revolve around it, not that you'd believe that from watching Clip. The sex is oddly treated in the film. In her quest to shock, Milos has decided to show some sex acts in hardcore detail. A dssclaimer at the end of the film assures us that 'No underage actors were involved in the filming of explicit sex scenes', it's a redundant disclaimer, because the hardcore shots are clumsily edited in, and never look like anything other than cutaways. This also applies to the film's nudity, which creates an odd double standard, as Jasna is shown repeatedly in explicit sex acts, but never seen nude. It looks as though Milos can't decide whether to be confrontational or coy.

Quite apart from this the film is simply boring. About three quarters of it consists of either Jasna being a bitch to her Mother or Jasna fucking Djole. The rest is made up largely of party scenes. Only in the last half hour is there any attempt to soften or develop Jasna as a character, first a scene where she looks after some kids at a foster home, then a scene where she talks to Djole about her father. It's far too little, far too late, and even if it did convince the film soon reverts to its familiar tantrum/fucking/party structure. This structure also means that Milos lets a few potentially interesting things serve no narrative purpose. Most egregious is the fact that she never makes any use of Jasna's cameraphone footage except as a source of cutaways. You keep expecting it to have a role in the plot and it never, ever does.

Clip is desperate to seem real, raw, relevant and hard hitting, but it misses those targets, largely by trying far too hard to hit them. Ultimately it comes off as little more than a tedious, directionless, wallow in the seedy side of life, and says nothing of import or interest in the process.
★☆☆☆☆
Posted by Sam Inglis at 00:12