So, here we are again, at the beginning of my favourite time of year. For any UK based movie fan, and especially as a critic, the London Film Festival is an extended Christmas: you get to see a lot of people you tend only to see once a year and there are loads of presents to unwrap. Some of the presents are great, but there's always the equivalent of that garish jumper your Grandma gave you that one year, before someone quietly explained to her that an HMV voucher would be fine. The difference is that you don't have to pretend that you like the shitty gifts, well, that and that you don't really have time to eat. It's really not that much like Christmas at all, but I felt I needed an extended metaphor for this intro.

I'll be watching a lot of films over the next few weeks, and there will be at least a mini review of every festival film, along with extended reviews of the most notable and interesting things I see. I hope you all enjoy the festival as much as I suspect I will. 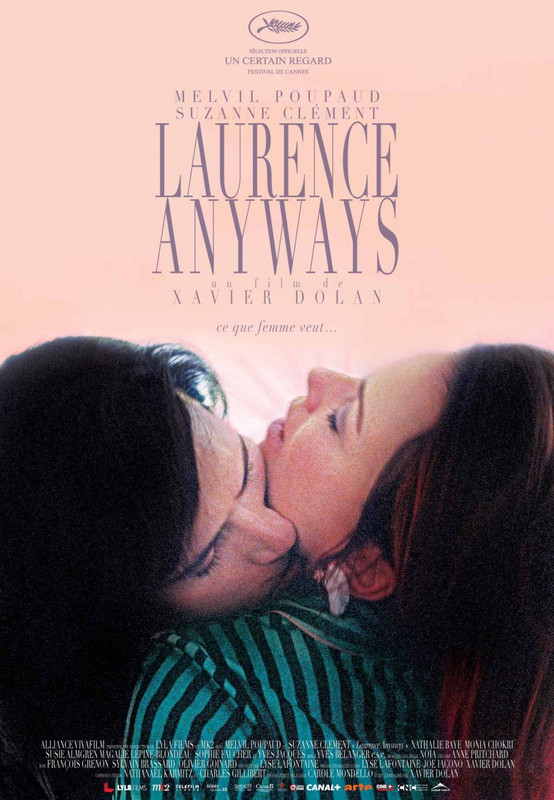 Xavier Dolan is clearly doing something right, this is his third feature film, and he's only 23, not many people get to this position at his age. Fewer still get the opportunity to release a near three hour opus about ten years in the life of a male to female transsexual. I can see why Dolan is in the rarefied position he occupies; Laurence Anyways contains several sequences that make any argument about his talents behind the camera moot, but equally it's clear from this film that this is not a fully mature talent, and that Dolan would benefit from having a few more restrictions.

We meet Laurence (Melvil Poupaud) as a man in his mid thirties, in a relationship with Fred (Suzanne Clement). One day, seemingly out of the blue, he tells Fred that he is, in fact, a woman trapped in a man's body, and that he wants to begin to transition. We then follow Laurence and Fred's relationship, through times together and apart, over the next ten years and through Laurence's transition.

Over 160 minutes the film works very well in fits and starts, but for every minute that works there are two that are pretentious, pointless, or in some other way insufferable. Two things stand out as bastions of quality; the leading performances of Poupaud and Clement, who are convincing and affecting as an odd couple who can never quite lay the ghost of their relationship. Both are especially fine in the film's best passage; its second half hour, which charts the very beginnings of Laurence's transition, and the strain it places on his relationship with Fred. This is where the film – unusually for Dolan – feels as if it is taking place in the real world, much of the directorial stylisation that is so irksome at times goes away and Dolan lets people and emotions take centre stage. He's quite good at this, I just wish he did more of it.

Outside of this 30-40 minute passage, Laurence Anyways lurches from moment to moment, never quite establishing a defined tone. One moment we'll be in the emotion of a scene between Laurence and Fred, then we're thrown into a more comedic beat with a chorus of drag queens who take Laurence in (an entirely pointless storyline which adds nothing to the film, and really should be residing in the DVD's deleted scenes), then Dolan will turn up the music, and essentially drop a music video into the film. The music video thing is a mixed blessing; from a purely visual standpoint they are some of the best things in the film, but really, the sequences that use the respective songs amount to little more than great videos for Fever Ray's If I Had A Heart and Viage's Fade to Grey.

Ultimately, Laurence Anyways is a better film than Dolan's last; Heartbeats, thanks largely to Poupaud and Clement's excellent performances along with strong support from Nathalie Baye and Heartbeats' Monia Chokri, and it has its share of great moments (I loved the opening and closing scenes, which strike completely different but equally impressive notes). However, there is at least as much wrong; it's at least 45 minutes longer than it need be, and at times it is laughably, achingly, pretentious (a shot of Clement being doused with water made me laugh out loud). I suspect Dolan has a great film in him, but he feels still frustratingly far from actually making it.
★★★☆☆ 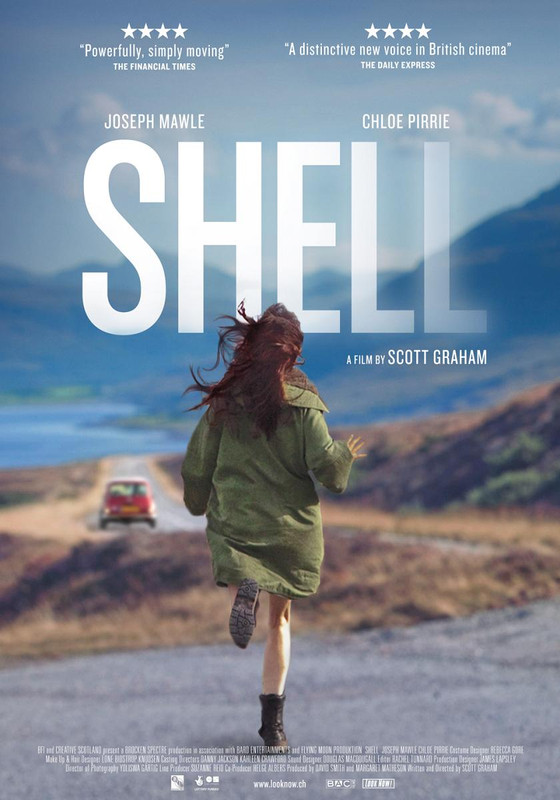 Low key might be the best way to describe Shell; it has only a handful of characters, a single major setting and the film's plot resides not in major incident but in the small dramas of the day to day life of a Father (Joseph Mawle) and his seventeen year old daughter (newcomer Chloe Pirrie) running a garage and petrol station in the Scottish highlands.

With any film of this scale, and this short on big dramatic events, success or failure rests largely on the shoulders of the cast. Happily first time director Graham has been blessed with some strong and subtle work from leads Pirrie and Mawle. For the first fifteen minutes or so we simply observe day to day life at this petrol station; it's isolated and cold, but neither Shell nor her Dad Pete seem too discontented with it. We see the way Shell interacts with the regulars; a middle aged man (Michael Smiley) who comes through on his way to and from seeing his kids and a local lad about her age, both of whom seem to have a crush on her. It's a bleak but effective character study as we see how Shell essentially runs the shop and looks after her epileptic Dad.

It's after this introduction that things really begin to get interesting, as the screenplay introduces a dark undertone between Shell and her Dad. I don't want to say much about it, but this is where the film might well have gone severely off the rails, happily, director Scott Graham keeps it bubbling away as an undertone for the most part, and Pirrie and Mawle's performances keep things ambiguous.

People will call (have called) Shell bleak. I'm not sure I agree. Certainly the setting and visuals are bleak; Yoliswa Gartig's photography of the highlands has a chilly beauty which lends cinematic quality to a story that could quite easily feel more suited to TV, or even the stage, and Scott Graham's shot selection gives us some impressive moments, particularly a strikingly empty image which is one of the last shots and, for me, should really have closed the film. That said I think the film, in it's own way, has a more hopeful tone than people are suggesting. Ultimately it's a film about choices, and I don't see that as inherently bleak.

The darkness in the film doesn't pay off, as it might in another more formulaic film, in a big overblown shouting match, but in a way that is equally hard hitting in a smaller, quieter sort of way. This is what Shell is really good at; little moments count for a lot at at script, performance and visual levels, and they make what is a slow and quiet little film add up to something that packs more punch than you'd expect. I'll be looking to see what both Scott Graham and Chloe Pirrie do next.
★★★★☆ 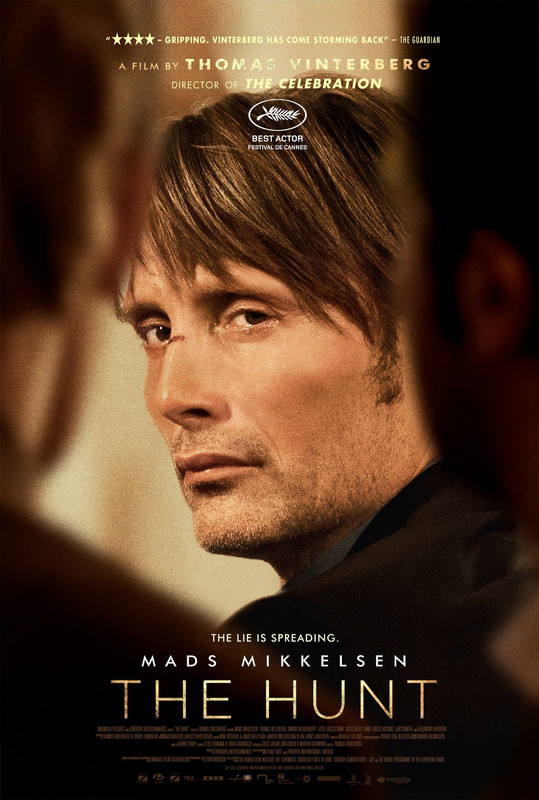 Some crimes are so bad, so reviled, that even the accusation can destroy a person's life. It's from this starting point that co-writer/director Vinterberg and star Mads Mikkelsen tell the story of Lucas, whose life is turned upside down when a little girl – the daughter of a friend – at the kindergarten he teaches at says something impulsively and brings an accusation of child abuse down on his head. The events that follow aren't unpredictable; we see Lucas ostracised by his community, losing his friends, being targeted by vigilantes, but even if the events are familiar both from the news and from cinema, the story is so well told and so well acted that it remains riveting.

Mikkelsen; surely one of the best Scadinavian actors working, is little short of sensational as Lucas. Sympathy is a given, as we know throughout that Lucas is innocent, but Mikkelsen brings us inside Lucas' experience of his nightmare. It's easy to play the rage, but it's the initial lack of comprehension and the growing horror with which he receives his treatment that really makes the performance both so real and so affecting. Though he's excellent, Mikkelsen is far from the only person giving a great performance. Just like Vinterberg and Tobias Lindholm's scrreenplay, Thomas Bo Larsen avoids cliché as the former friend who now suspects that Lucas has assaulted his four year old daughter, and Vinterberg draws remarkable work from young Annika Wedderkorp as Klara, whose thoughtless lie starts all the trouble.

For the most part the film resists melodrama (though a church scene towards the end threatens to push the boat out a little far for my liking), and Vinterberg says a lot about both the way that a single lie can spin totally out of control and the chilling way that a community can leap to conclusions, without getting on his high horse and making a political statement in lieu of telling the story. I have seen films tread this ground before, but The Hunt is chilling and well made, and well worth seeing.
★★★☆☆
Posted by Sam Inglis at 22:34