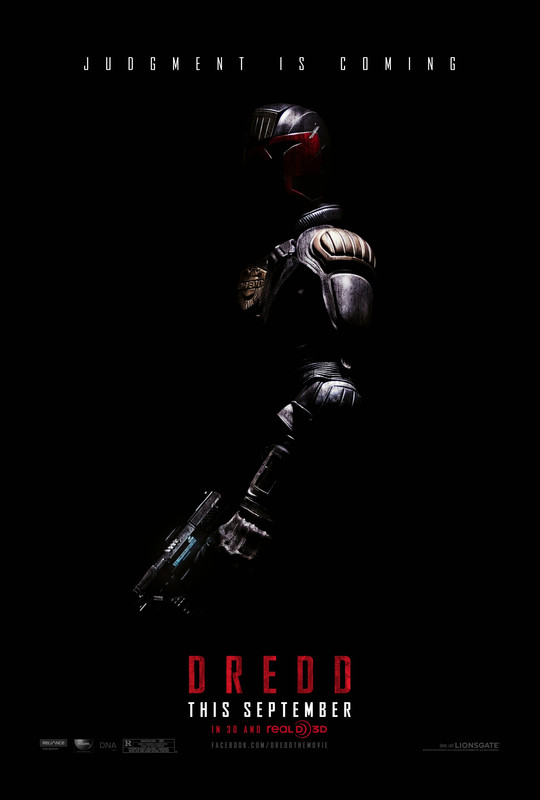 I haven't read comics for about fifteen years now, and even when I did I was a Spider-Man fan, so my only previous experience of Judge Dredd comes from the previous film; an unintentionally funny effort which, if nothing else, did give us Stallone's endlessly hilarious "I AM THE LAW".  Dredd is apparently much more faithful to the 2000ad comic, and is a dirtier, grittier and nastier film than its predecessor.  It's certainly not a remake, and doesn't feel like a reboot either, as it seems to have so little connection to the previous film.

This Dredd is on a much smaller scale than the 1995 film, and while it's nobody's fault - the two films were in production at the same time - the film actually conjures most memories of is the recent martial arts movie The Raid.  In a simple and contained storyline that seems to have been arrived at so that costs could be kept to an estimated $45m - which, in Hollywood terms, is barely mid budget - Dredd (Karl Urban) and rookie Judge Anderson (Olivia Thirlby) are dispatched to investigate a triple murder.  On arrival, they find themselves trapped, locked in a building run by a gang led by MaMa (Lena Heady) and having to fight their way through 200 floors of heavily armed criminals under orders to kill them.  The action is pretty much non-stop, with little room for character development, but hey, that's action cinema for you, and doesn't mean Dredd can't still be fun.

There are fun things in Dredd, though there would be more if it weren't marred by its format.  Shot in a regular 2D format, the film has been converted to 3D for its release.  This has been a long process and appears to have always been the intention of the filmmakers, but if anything those facts only show up the conversion process more.  A couple of shots towards the end of the film are impressive, notably one of a character falling towards us in slow motion, which does have a sense of depth to it, but for the bulk of the film's sensibly rather brief running time it is more problematic than impressive.  'Ghosting' - whereby a character or object in frame seems to have a faint double outline - was a problem I thought had been ironed out of 3D cinema, but it regularly makes an appearance in Dredd, it's milder than it was on the first generation of Real D releases, but it's still really distracting and makes the shots it appears in (I spotted it quite frequently on guns, but also on Dredd's helmet at times) look amateurish.  More prevalent and problematic given that this is, for the most part, a pretty fast moving film visually is the old and still unaddressed problem of extreme motion blur, which gives 3D action a smeary and indistinct quality that seriously impacts on the impressiveness of any action choreography.  This is a terrible shame, because it does mean that the film is far less enjoyable in 3D than it would likely be in 2D, in which, though it would be no smarter or deeper, you would at least be able to see all the action scenes properly.

All this said, there are a lot of good things here.  First, for fans, it's worth confirming that Dredd never removes his helmet (which, happily, doesn't look quite so overly large on film as it does in the stills).  There isn't a lot more to Karl Urban's performance than grimacing from beneath that helmet and grunting a few (sometimes blackly funny) lines, but given that Dredd has one of the most inert character arcs of any leading character there's not a lot more you can expect from him, and he does seem to capture the essence of this hard edged and uncompromising force of law.  Olivia Thirlby has a bit more of an arc, and her Judge Anderson provides the film with its best scene.  Anderson is psychic, and while for the most part this is shown in a pretty standard way, with flash frames revealing what someone is thinking, one scene has Anderson entering the mind of a criminal, where each tries to one up the other in psychic terrorisation.  It's a very cool sequence, and twists and turns effectively several times.  Thirlby is good in the role, and navigates the scared rookie to useful partner character arc credibly enough that you'll want to see her back at Dredd's side in the inevitable sequel.  The Wire's Wood Harris also does decent work, putting in a strong turn in an underwritten part as a perp Dredd and Anderson have to drag around with them and protect, and the increasingly ubiquitous Domhnall Gleeson does well as a weaselly computer operator.

Perhaps the highlight among the cast is Lena Heady, who is clearly having an enormously good time playing the scarred, psychotic, MaMa.  She revels in the character's evil, and has a particularly menacing grin which the film deploys to striking effect a couple of times.  It's a shame that she doesn't get in on the action a little more, as she certainly has training from her days as Sarah Connor, but she makes for a highly entertaining and slightly unusual 'big bad'. 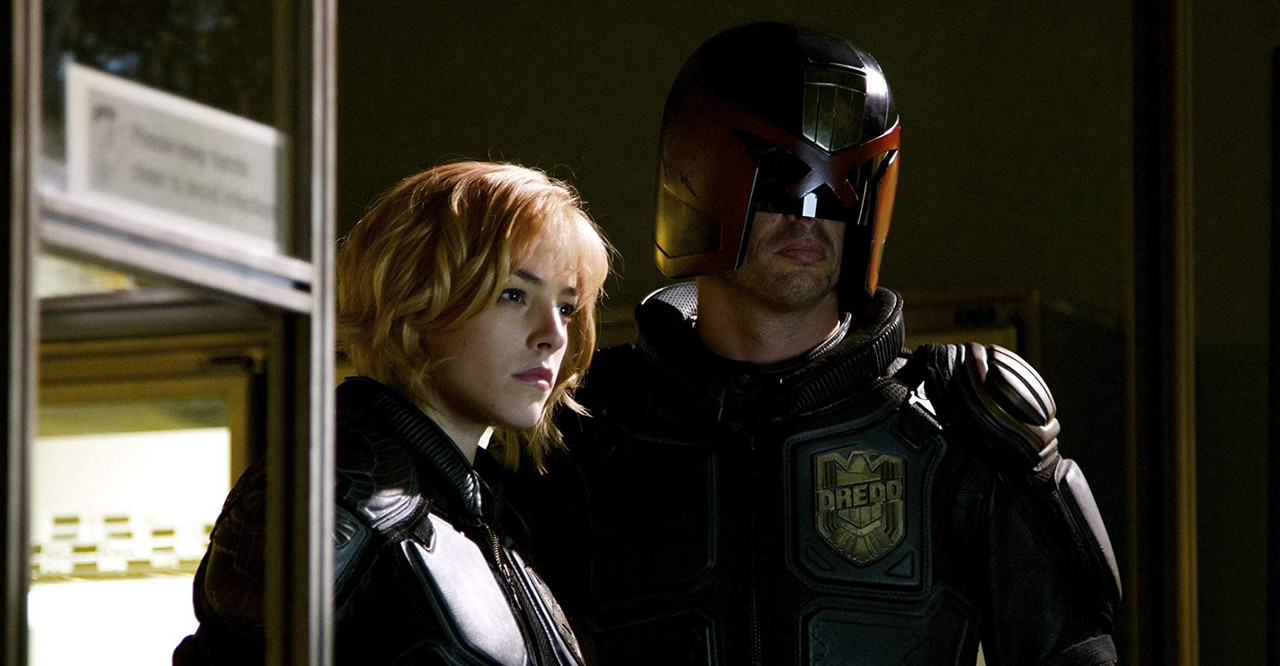 The cast is stronger than expected, but problems abound around them.  The drug the MaMa gang supplies is called Slo Mo, which is the cue for an overabundance of extreme slow motion scenes, which look cool and pretty to begin with, but end up testing the patience.  The other issue is much more major; the action can simply be a bit dull.  At times the film resembles a shooting gallery type video game, director Pete Travis has a few nice ideas regarding his visuals, but his action lacks variation.  There is only one scene of hand to hand combat, and that's over pretty fast.  The reason that The Raid ended up transcending its very computer gamey level based plot was that the action was blisteringly inventive and varied from scene to scene, that simply isn't true of Dredd, if you're going to make something as wall to wall full of gunfights as this is you need someone who can make each of those scenes have a different character, and Pete Travis isn't that man.  Add to that a colour palette composed largely of grey, and you've got a film that can become a bit dull.

Dredd's pretty solid by the standards of recent action films.  There has been at least some thought put into it, it builds a reasonably credible dystopia in short order, one a sequel could easily expand upon.  When you can see it through the smear of the 3D the action is pretty well staged, despite its repetitiveness, and the well earned 18 rating means that the film can really go full throttle and gives us a couple of inventively nasty slow motion shots.  The cast is the real surprise though, with all three leads; Urban, Thirlby and Heady delivering good work in tough roles.  Hopefully, with this proof of concept film out the way, a sequel can get a more generous budget and use locations that will allow for much more variation in the action scenes.  I suspect I'll enjoy this film a lot more in 2D, but I can only review what I saw (and that, for the record, seems to be the filmmaker's preferred version, though God only knows why), so for now I can't quite join the chorus of critical hosannas it has been greeted with.
★★★☆☆
Posted by Sam Inglis at 17:30