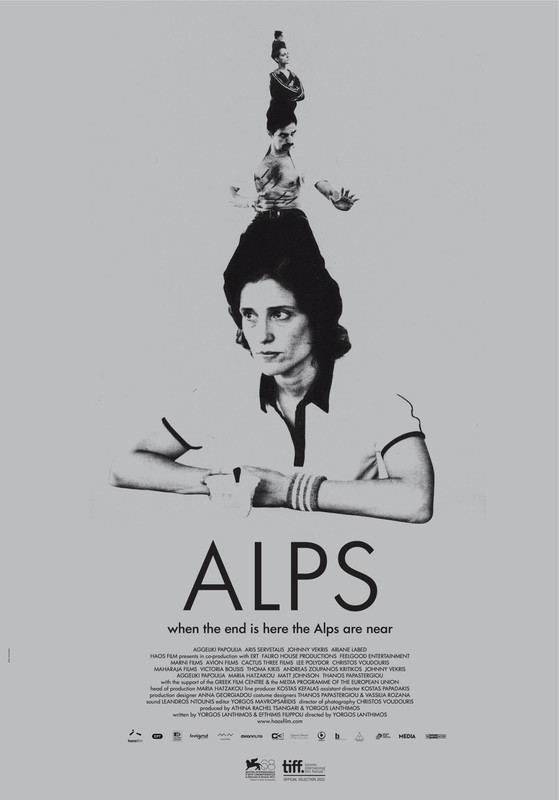 In 2009 I saw Yorgos Lanthimos' second feature film, Dogtooth, at the LFF and was knocked sideways by it. For my money I haven't seen a better film since, old or new. Alps could never have been the cinematic kick in the teeth that Dogtooth was, it is too burdened by being the subsequent feature to one so striking, but even if it is not the instantly flooring thing that Dogtooth was, Alps is an incredibly vital, individual and fascinating piece of cinema, and sees Lanthimos deliver on the promise of his last film.

The title refers not to the mountain range but to a group of four people; a nurse (Aggeliki Papoulia, the elder daughter in Dogtooth), a paramedic (Arus Servetalis) and a gymnast (Ariane Labed, the lead in Dogtooth and Alps producer Athina Rachel Tsangarai's Attenberg) and her coach (Johnny Vekris). This group seems to exist as a sort of grief counselling service, but the therapy they offer is for one of the group to 'stand in' for a dead friend or relative of the bereaved and re-enact scenes from their lives. We largely follow the nurse, encountering the other characters either when the group meets or when two of them have the same job.

As you would expect if you've seen Dogtooth, there is a deeply uncomfortable and uncertain feeling as you watch Alps, Lanthimos challenges even your most basic assumptions about the truth of the relationships between the characters, that may make Alps a frustrating watch for some, the constant questioning and my shifting perspective on what was going on in the film was something I found fascinating.

The film unfolds patiently, each little vignette filling us in a bit more either on how the group's sessions work (we see the nurse with several people who are definitely clients, notably a couple whose teenage daughter she tended to in hospital) or how the group dynamic functions. The funniest and the most disturbing scenes revolve around that group dynamic.  Like Dogtooth this film shows a small, dysfunctional, family ruled over by a stern patriarch, who amuse themselves in strange ways. At one group meeting they perfect their stand in skills, doing impressions for the others to guess (Ariane Labed's hilarious take on Prince really has to be seen), even there though there is no levity, no sense of community, and if there's one thing I'd complain about with this film it's that it would be nice to understand a bit more about how this group came together. Tension is an odd thing in this film, take the scene where the paramedic gives the nurse a 'test'; it's immediately obvious what's going to happen, but Lanthimos delays it so long, and makes you dwell so uncomfortably in the moment with his unblinking, unmoving, camera, that it is a genuinely nailbiting moment, not so much about what, but when.

I loved Alps at a visual level from the opening shot, which is very simple, just a still frame of Labed standing in a gymnasium, waiting to perform a rhythmic gymnastics routine, as O'Fortuna booms out of the speakers. It doesn't tell us much, but it's such a striking juxtaposition of image and sound, and such an unexpected opening image that it makes an immediate impression. The rest of the visuals are similarly striking and heavily designed.  The Alps members are often the centre of shots, but also often obscured, with many shots showing the back of one of them, in close up, with background characters in blown out focus. Lanthimos holds shots for an often uncomfortable length of time, as if he wants to force us to look long and hard at this strange world he has created.

The question of identity also comes up a lot here, with characters adopting other personae so frequently that we're never allowed to be sure who they really are. Even Ariane Labed's character; the naive gymnast who clearly struggles with her work for the group, presents a question in this respect.  Though her coach is definitely another member of the group I found myself wondering, thanks to their sometimes robotic interaction and the often repeated question of why she can't perform to pop music, whether he might also be a client. This question comes up even more intensely with the nurse, we see her interacting with and feeding medication to a pensioner whom she calls her Father, but there is always a nagging doubt as to whether he too is a client and, ultimately, whether these people really have real lives that include others. I'm sure Lanthimos doesn't want us to know the truth of these relationships (and nor do I really want to know), but I'd be intrigued to know what he thinks is the truth of them.

Like Dogtooth, Alps is a comedy, a deep, dark, none more black comedy, but a comedy nonetheless. The humour hits like a hammer, because it's so out of place, and delivered in such a deadpan fashion. It comes in the awkwardness of some of the re-enactments (the nurse and the coach pantomiming sex, re-enacting the moment an elderly client caught her late husband with another woman), in the dialogue (in the opening scene the paramedic urgently asks a gravely injured girl who is her favourite actor) and in the images (the nurse trying to get that same girl, bandaged almost from head to toe, to play tennis). Set against the strange and disturbing world of the film, this absurdist humour is odd, but very effective. The performances strike a similar tone; they seem a little robotic at times, but that comes out of the situation presented, and adds to the comedy of many of the re-enactment scenes but, particularly from Papoulia and Labed, there are hints of much more going on beneath that emotionless surface the characters are trying to present.

Ultimately I still don't know quite what to make of Alps. It's clearly an astonishingly accomplished piece of art as well as highly engaging and - surprisingly I suppose - entertaining film, and it further marks out Yorgos Lanthimos as one of the most interesting directors in world cinema. I don't think it's the instant classic that Dogtooth was, but it's no disappointment. Days after I saw it, it continues to go round in my head, images and questions recurring over and over, I can't wait to see it again and try to work it out.
★★★★★
Posted by Sam Inglis at 11:04