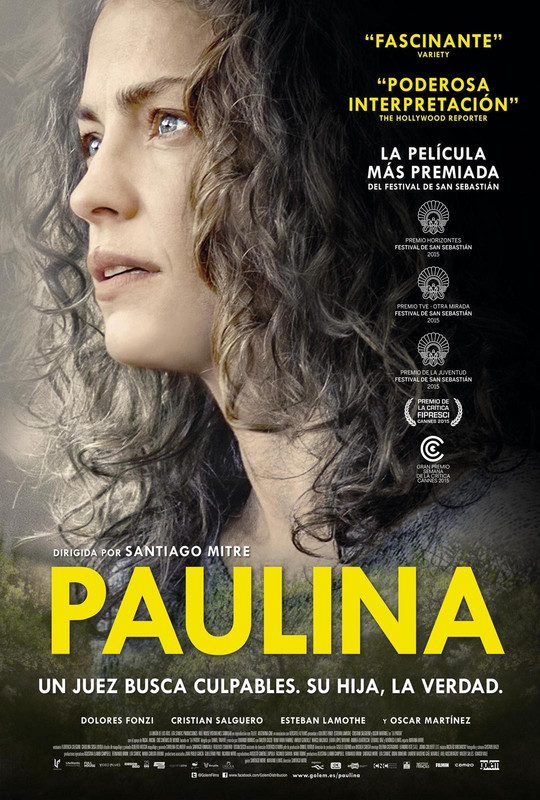 Paulina is a difficult film to classify, at times it looks as though it is going to take paths that will transform it into something that will fall into one genre or another, but over and over again it pulls back from those relatively easy turns, instead zeroing in on the character and the performance at its centre.

Paulina (Dolores Fonzi) is a middle-class Argentinian woman in her early 20s, who abruptly decides to leave her PHD studies and go to a Paraguayan border town to teach. Her father, a local judge, doesn't understand but is supportive. However, after Paulina is raped, her father and her new friends are worried by the way she reacts.

There are many films that Paulina might have been; a social problem film about the grind of being poor and sucked into crime in the town Paulina is teaching in; a slow burn rape-revenge film; a film about a powerful father avenging his daughter's violation, or an introspective drama about a young woman turning her emotions inwards after suffering this horrific ordeal. In a way, Santiago Mitre's film is all and none of these.

Paulina herself isn't an easy character to understand. Perhaps because we've conditioned by films over the years it is easy to expect depictions of rape victims to show them either filled with vengeful anger or obviously outwardly traumatised. Paulina's reaction isn't always clear, it's not one of understanding or compassion exactly, but she quickly rejects any level of self-pity and when she discovers that she is pregnant as a result of her rape the question of punishing the perpetrators seems to become more fraught for her. Little of what she's thinking is stated and we never see whatever she may have planned to do come to fruition, but what seems to come through is that Paulina is trying balance her anger with the principles that led her to Paraguay and to put those principles into practice to do something that will, to her mind, be more useful than simply going to the Police.

For all this, this is not a film that asks us to understand or sympathise with the people who attacked Paulina, even if she tries to do so. Rather, Mitre asks us to understand the complexity of the emotions (and indeed the hormones) affecting Paulina, and why they might lead her to seek a different – if undefined – sort of justice. The reason we buy into all of this, into Paulina's strong convictions about everything in her life, is because Dolores Fonzi's performance is completely believable. It would be easy for an actress to turn this into an excuse for showboating, but Fonzi plays everything close to the chest. This is also why the film manages to convince you that it may at any point take a different turn, into something more along the lines of Katalin Varga, you believe Paulina is capable of that, as well as believing her apparently extreme capacity for empathy.

There are no easy answers in Paulina, catharsis, either through talk or violence, isn't what it's interested in. Instead, it deals in moral uncertainties that run long past the credits. That's probably what I like most about it; it's still going round in my head.
★★★★ 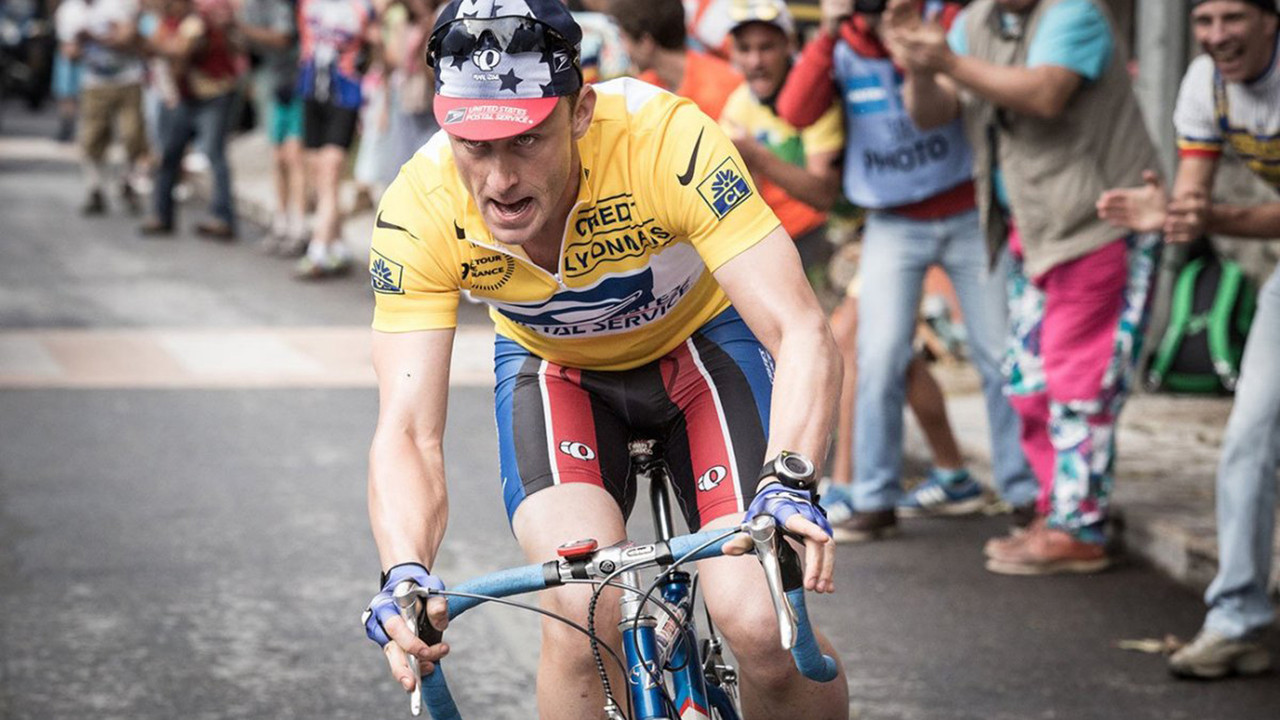 Ben Foster has long been one of those actors who make casual film fans say 'oh, hey, it's that guy'. The Program may finally bring him to the greater attention that he has long deserved, it's just a shame that not a single other thing about it is even remotely notable.

The Program tells the now well-documented story of Lance Armstrong, picking him up at 21 in his first Tour de France, following his battle with cancer, the doping programme that powered him to seven Tour wins in a row and his eventual fall from grace. It does all this in the most schematic manner possible, baldly dramatising events in the exact order they occurred, never bothering to craft a framing device or anything else to upset or enliven the incredibly basic a to b to c structure. The film itself may not be boring, but the way it is made and assembled certainly is.

John Hodge's screenplay isn't especially strong. The dialogue is well crafted enough, especially when it comes to giving Armstrong a credible private voice, but Hodge allows many side stories, notably that of David Walsh, initially the crusading journalist flipside to Armstrong's cheating sociopath, to simply peter out, before the whole film follows suit, ending with a sudden whimper and a cut to captions wrapping up the loose ends. It's as if Hodge, Frears, and editor Valerio Bonelli realised that they had passed the 100-minute mark and said, 'just stop it there'.

The cast are a bit of a mixed bag. Jesse Plemons does good work as conflicted fellow cheat Floyd Landis, O'Dowd steals a few funny lines as David Walsh but never disappears into the role and Denis Menochet is solid as Armstrong's complicit coach. On the other hand, what Guillaume Canet, contributing little more than a silly voice, is doing as the doctor who taught Armstrong how to dope and not get caught is beyond me.

Ben Foster outclasses everyone and everything else on screen here. His Armstrong seems eerily accurate. His preparation, which included following Armstrong's doping routine, clearly paid dividends, but it's not the voice or the look (achieved with some subtle makeup work), it's the eyes. Foster's best moments come in his public denials of drug use. He's strident, defiant, even indignant, the body language is passionate but behind the eyes there seems to be a blank space. This detachment that Foster plays, Armstrong's ability to see his drug use as just another part of competition that he excelled in, can be chilling, but he's so successful at playing this side of the man that anything else seems to go away. Even the moments that we are supposed to see another side to him, such as when he visits kids with cancer, seem to be part of Armstrong's cynical image building, which I doubt is entirely fair. 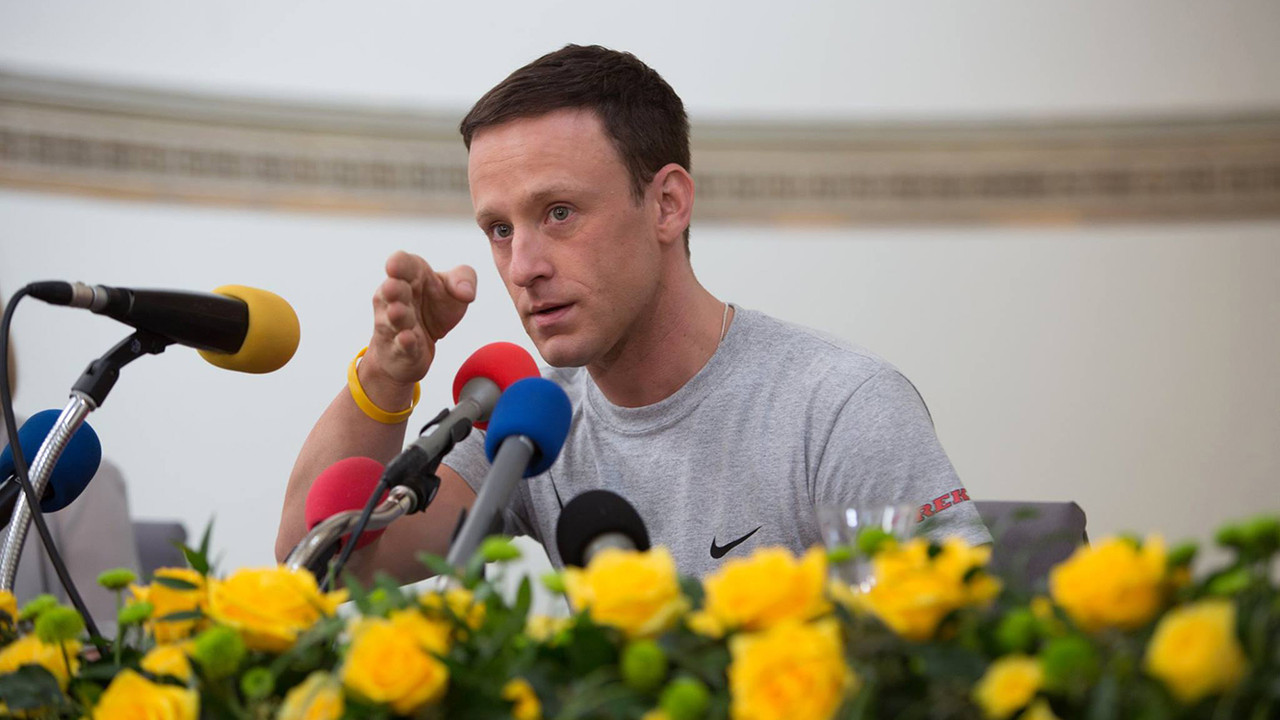 The Program is straightforward to its very bones. Stephen Frears is a journeyman, and he stamps no authority, no identifiable voice, on this film. Everything is competently filmed, but it's largely as blandly shot as any TV drama, though the editing of the Tour scenes does help inject some pace if not much excitement.

Perhaps part of the reason The Program feels like such a trudge is that there is no mystery to it, even for someone like myself, who brought only a cursory knowledge of Lance Armstrong's career to it, this does little more than scratch at the surface. The scenes that detail the exacting nature of the doping program was carried out are at least informative, but I imagine that that information is also in The Armstrong Lie, so I struggle to see what The Program adds, other than another great Ben Foster performance.

Ben Foster is a remarkable actor, this isn't his best work, but it's likely to get him his first Oscar nomination and he is, just about, worth seeing The Program for, but without him, the wheels would fall off this rickety vehicle of a movie.
★★
Posted by Sam Inglis at 00:26