Note: This review was written for the now defunct Verité Magazine. Thanks to them for letting me use it here. 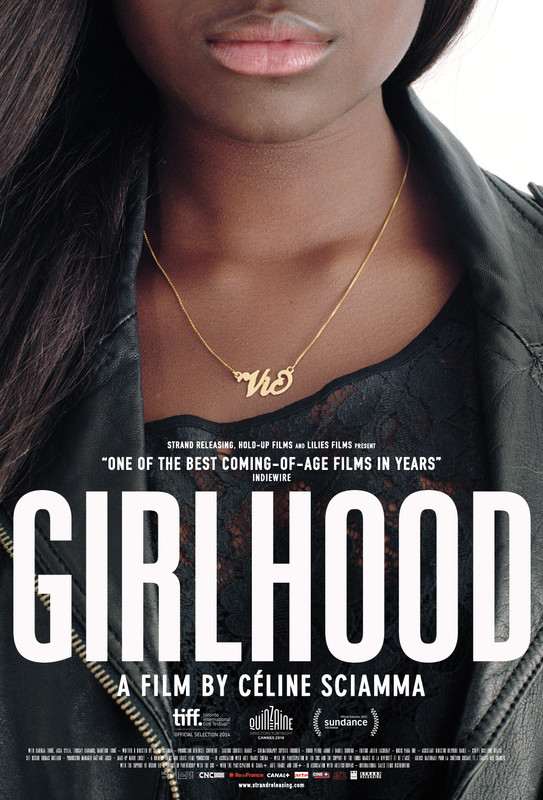 About half an hour into Girlhood, Céline Sciamma visualises the moment that 16-year-old protagonist Marieme (Karidja Touré) finds a temporary sense of belonging. Hanging out for a few weeks with a bad girl posse led by Lady (Assa Sylla), Marieme finds herself in the group but not quite one of the gang, always off to one side while being auditioned as the potential fourth member. In a hotel room, the girls have booked for a party, Marieme lies back as the others lipsync to Rhianna's 'Diamonds'. Halfway through the song, Marieme joins them. The lipsyncing stops and the girls, united, sing out loud. At that moment they're a group that Marieme is now fully part of. A moment that Marieme herself may not consciously recognise, but it's one of many that's powerfully and cinematically communicated in Girlhood.

The film's effective title is more striking than a direct translation of the French 'Bande De Filles', but coming so soon after Richard Linklater's Oscar-winner, it somewhat mis-advertises Marieme's story as a feminised take on Boyhood. Both are epic coming of age stories that span time with long running times, but Marieme's experience couldn't be more different from Linklater's 12-years-in-the-life of the suburban every boy. Set in the black community of the Paris banlieues, Marieme falls in with these troublesome teens, largely to get away from a troubled home life with her younger sisters, a single mother, and an abusive older brother. Some of the narrative incidents as she drifts towards and away from the gang, and a boyfriend she has to keep secret from her brother, are familiar, but Sciamma's perceptive screenplay has a sensitive and deep understanding of growing pains, beautifully borne out by the first-time performances of her cast.

This is Sciamma's third film, and it seems to mark a growth in confidence. It still finds the writer-director tackling the subject of a young woman coming of age, but here she engages with a different community and sets aside the LGBT issues confronted by characters in 2008's Water Lilies and 2011's Tomboy. Girlhood retains the intimacy of the previous films, but feels like a larger and more cinematic work, from the very first sequence of an American football game between Marieme and her friends and another local team. It's a high energy opening, powered by the ground level visuals and the choice of Light Asylum's 'Dark Allies' on the soundtrack. It also feels like the end of a chapter of Marieme's life - one we've not seen - as the lights go out in the stadium and the title appears against a black screen, signaling a new phase.

This idea of phases beginning and ending is key to the film, which unfolds in five acts, each bracketed with a recurring motif. Sciamma ends the first three acts with a shot of Marieme's back, showing her literally turning it on a part of her past. The last two acts make subtle shifts in this pattern, but the lighting and framing is identifiably recurrent, with the camera always settled on Marieme's face in the first frame of each new act. These progressions feel like importantly demarcated chapters in Marieme's life, as Para One's score rises and a black screen marks a definitive act break, allowing a breather from the various anxieties of adolescence and a moment for the audience to reflect on the hard road of maturation for the life unfolding before them.

Marieme's experiences with Lady and their friends Adiatou (Lindsay Karamoh) and Fily (Mariétou Touré) form the bulk of the film. Not all are positive; the girls intimidate other pupils at Marieme's school for money and there are fights between gangs, but Sciamma refrains from judging, simply presenting these events as part of a complex social picture. Set almost entirely within the black communities of the banlieus, racism only occasionally rears its head, but there are notable incidents. As the girls browse in the mall, a white employee keeps a not too subtle eye on Marieme, assuming she might be out to steal. It's an uncomfortable scene, but one the young cast have said rings true in their own lives. 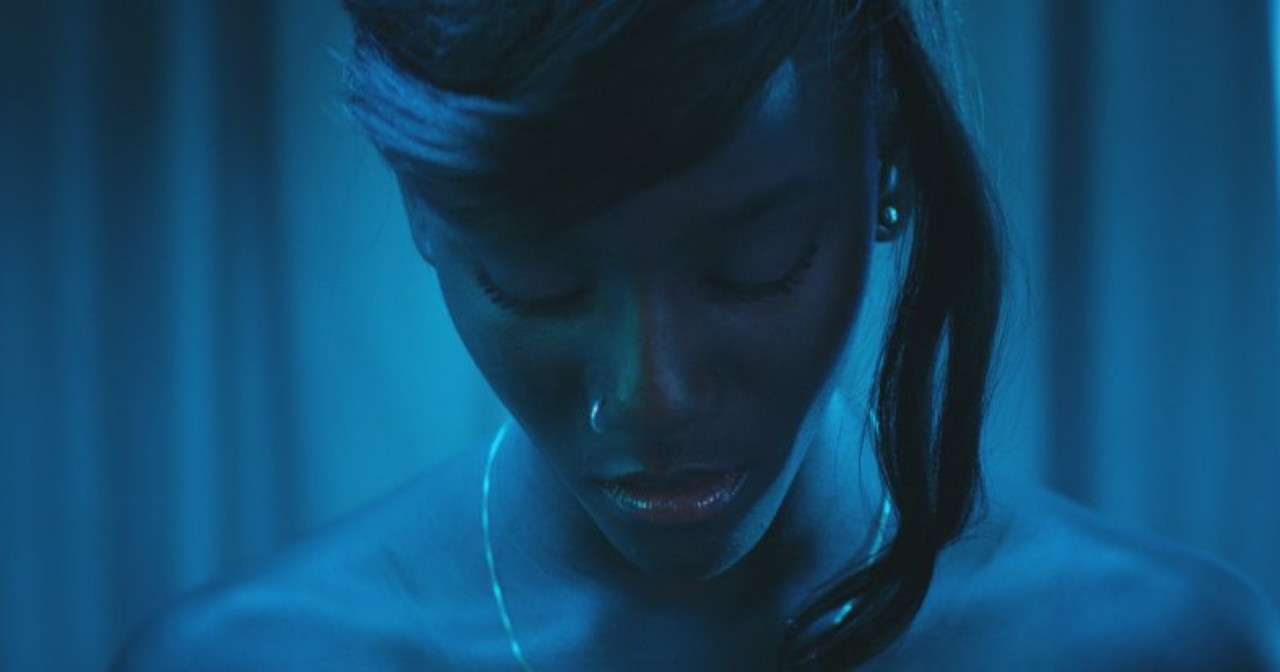 The girls are marginalised sexually as well as racially. Early on, the excited chatter of the group walking home from the American football game slows first to a murmur then to silence as they pass a group of boys, and much later, to survive in the male-oriented world of drug dealing, Marieme adopts a more masculine swagger, her hair in cornrows that give her a fierce appearance and never out of sweatpants. It's a tension more directly dealt with in the way Marieme is treated by her brother Djibril (Cyril Mendy). We get a sense of the fact she's scared of him and what he might do; when Marieme notices her younger sister's physical development and urges her to hide this from Djibril. The full implications of this are never dug into, but it sets a tense tone for any scenes in the household. That tension threatens to explode in one disturbing scene after Marieme returns home from her hotel party, when Djibril hugs his sister, only to tighten his grip and begin choking her.

Despite going to some dark places, Girlhood does find moments of levity. The girls may appear fierce when facing down another gang in an argument across the platforms of a metro station, but they're also silly, funny, immature teenagers. And as much as the Diamonds singalong is about Marieme becoming fully part of the group, it's also a pure moment of escape, of girls simply being girls together. In the lighter-hearted scenes, there are even flashes of broader comedy, such as when the girls go to play crazy golf and Fily gets upset when Adiatou does better than her.

It's rare that these moments of escape have such an uncomplicated purity to them. Sciamma allows the real world to frequently intrude most notably when the girls, minus Lady, run into an old member of their gang, now a parent to a small child. In this interaction, a glimpse of the likely future; that the gang will break up and that the girls will almost certainly end up in some sort of depressing domesticity, replaced by a younger generation. This is something seen beginning, when Marieme - now as much a leader of the pack as Lady - has to drag her sister away from a younger gang.

Much like a mixed up teen, Girlhood has many mood swings, sulky one minute and jubilant the next, but these are knitted together in a way that feels like life itself by the completely natural performances of the four girls, all of them non-actors prior to shooting. Fily and Adiatou are less defined, but Lindsay Karamoh and Mariétou Touré each have their memorable moments. Assa Sylla as Lady and  Karidja Touré as Marieme make indelible impressions. Sylla is hugely charismatic, drawing the camera with just a hard stare, and a presence and attitude that marks her out as a natural leader. Initially all front, Lady is confrontational even when she invites Marieme to join the girls on an afternoon in town, but hidden behind that pose is a vulnerability that becomes visible, the more Marieme begins to understand and imitate Lady.

Karidja Touré has the hardest job in the film, mapping Marieme's maturation in the way her persona changes through subtle shifts of confidence; none more so than when Lady renames her 'Vic' (for Victory). Slowly 'Vic' assumes some of Lady's dominance, even fighting battles for her. At other times those internal changes are signaled by external appearance, particularly Marieme's hair. At first, her long, childlike braids are removed and her hair straightened to make her seem womanly and chic before she starts dealing drugs and changing her hair to a harder look that enables her to cope better in that environment. Toure's performance is all the more moving for the emotional details she puts into her many changes of 'costume' that are worn like a girl trying on a new identity.

Girlhood doesn't suggest that growing up is easy, and Sciamma never tries to assure the viewer that everything is going to work out for Marieme, leaving us to make up our own minds about the ending. Karidja Touré has said that she sees Marieme going off into a successful life, but even if one were to feel as hopeful about her future, it's clear that achieving this will be far from simple. Whatever the challenges, based on what we've already seen her go through, Marieme seems ready to step up and meet them, and it's through these experiences, that when the film goes to black for the last time, it feels like she's finally found an identity with which to do just that.
★★★★★
Posted by Sam Inglis at 11:33