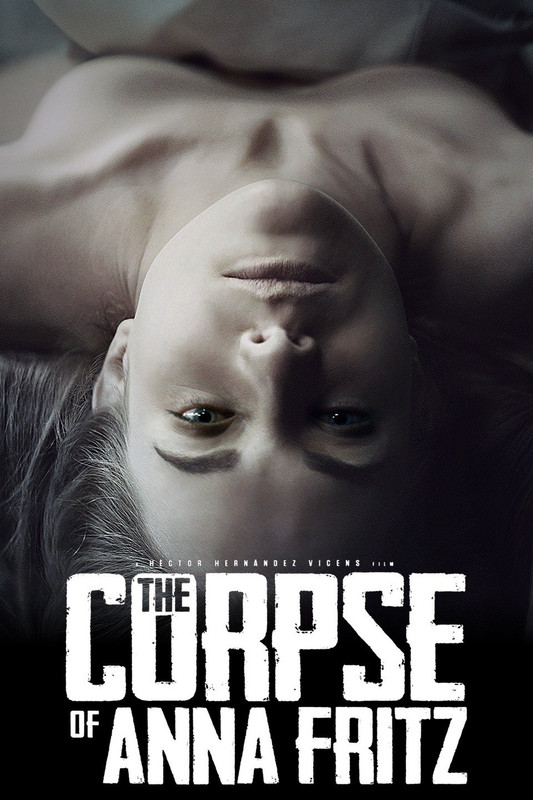 The premise is strong: beautiful young actress Anna Fritz (Alba Ribas) dies and Pau (Albert Carbó), the orderly who takes her body in at the morgue has two of his friends come over to see her. After doing some coke, looking at and feeling up Anna, Ivan (Cristian Valencia) decides to take things further, to the mounting horror of Javi (Bernat Saumell). After Ivan has taken his turn, Pau also has sex with Anna's corpse. That's when she wakes up and the question of how to deal with this situation arises.

I was hoping for so much more from this film; a tense thriller mixed with body horror themes that could easily lead into a subtext about the degree to which we, as an audience, consider that we own celebrities, whether in life or in death. If those ideas exist in The Corpse of Anna Fritz then they are buried deep, hidden beneath one of the most by the numbers, predictable so-called horror films I've seen for some time. If I just meant that the plot was predictable, that wouldn't be so bad (after all, we can all guess that Anna has to wake up at some point). The problem is that the predictability extends so far; to every detail of the progression of the story, to the shape of individual scenes, right down to specific shots and edits.

Even at 75 minutes, the film feels brutally stretched out. The ideas here could just about justify a 20 minute short, but to eke a feature out everything is extended and much ground is trodden many times over. The extended moments can occasionally work for the film. When Pau is raping Anna we are forced to watch in a long and disturbing sequence, knowing that it's almost inevitable that she is going to wake up. For a couple of minutes, the largely static camerawork and cold atmosphere work well, but the film has nowhere to go from this apex of horror (which happens barely 20 minutes in).

Characterisation is incredibly broad. Ivan is a basic monster "just pretend she's drunk", he tells Javi, trying to talk him into joining in the 'fun' he's having with Anna, implying that he's probably a date rapist on top of everything he does here. Javi isn't exactly a saint, but his character arc is cut short early, which is a pity because his mounting guilt is not badly played and could serve as an effective source of tension for much longer than it does. Pau's arc could come across as complex; he's as bad as Ivan in some ways, but also has some of Javi's guilt, but the shifts in his character seem haphazard and dictated by the plot. The performances aren't bad, given what the actors have to work with, but there is never enough depth for anyone to truly impress.

This is especially true for Alba Ribas. You have to wonder what attracts an actress to this part. Ribas' main job here is to lie still, frequently while naked. Once she wakes up you would expect her part to become more dynamic but, for no reason that seems medically explicable, she is still unable to move and barely able to talk for the great bulk of the running time. This is problematic on several levels; first it reduces Ribas, for about 75% of her screentime, to a nude or scantily clad prop, secondly, it robs the film of more variety in its setpieces. One setpiece, a slow chase towards the end of the film, makes what could be an effective use of Anna's inexplicable paralysis, but it is undermined by the grindingly predictable direction and editing, which robs the sequence of the suspense it's trying to generate. For instance, the second Anna crawled into a lift at the end of this sequence I knew exactly what the next cut and shot would be, and so do you.

Ultimately we've seen everything in this film done better many, many times. If there is even an attempt at commentary on celebrity then it pales next to Brandon Cronenberg's Antiviral, the moral implications and horror of the basic premise are far more interestingly explored in Deadgirl and the character dynamics are infinitely more interesting in any number of locked room thrillers. The Corpse of Anna Fritz is a missed opportunity on every level; a grindingly dull and emptily shocking misfire that feels much, much longer than 75 minutes. It is, sad to say, dead on arrival.
★
Posted by Sam Inglis at 10:07