French cinema has seldom found itself short of exciting and engaging young actresses, but 25 year old Adèle  Haenel, who first made her mark in the UK with 2008's Water Lilies, is one of the most distinctive and interesting to come along for some time. At present, she has one film, Les Combattants (sticking, thankfully, with its French title over the corny and inaccurate English title Love at First Fight), on UK release and another, French Riviera (also being released under the English title In The Name Of My Daughter), previewing in a season at the Cine Lumiere. Here are short(ish) reviews of both. 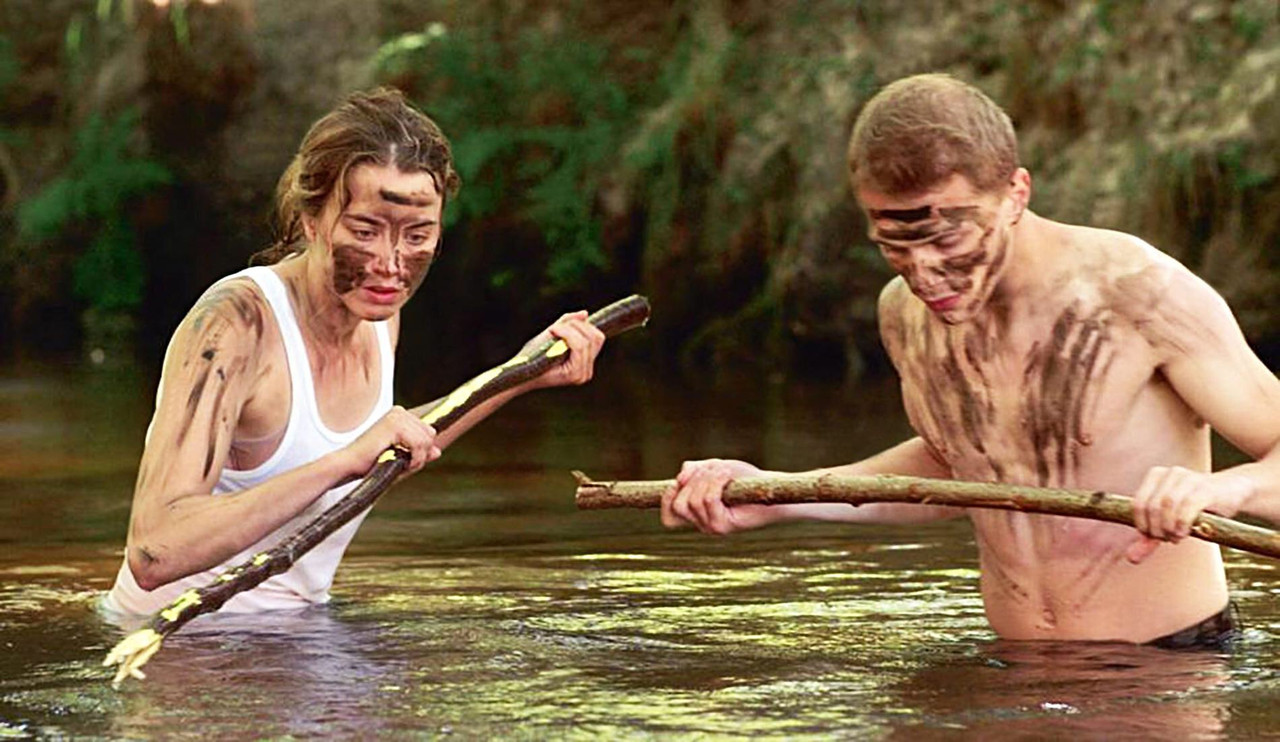 Oddly described by a poster and trailer quote as a feelgood comedy, Les Combattants may not be as dark as it seems the second and third acts are preparing us for it to become, but it's hardly a laugh a minute rom-com either.

Arnaud (Kévin Azaïs) seems aimless until he meets Madeleine (Haenel). The first time they meet is at an army recruiting event, when they have to fight, the second time makes more impression, as Arnaud and his brother are doing some work at Madeleine's house. It becomes clear that she wants to go to Para training camp, and as she and Arnaud become closer he elects to follow her. Eventually, after a training exercise, the two end up going AWOL together and falling for one another.

The film's overarching story is set in motion at an awkward dinner that Madeleine has with Arnaud's family, at which she says that she thinks the end is coming. It's not a religious conviction, but one that seems born out of looking around at the world and not seeing how it can survive. Slowly it becomes clear that, at some level, Les Combattants is working its way toward a personal apocalypse

Les Combattants has a few things to recommend it; a screenplay that unfolds its story and themes patiently, despite a brief runtime, a selection of strong performances and a confidence that marks Thomas Cailley as a filmmaker to watch out for but, as it so often is when she's in a film, the main reason it is to be recommended is Adèle Haenel.

Haenel's default mode in many of her performances is to project confrontation as if she's expecting the world to kick out at her and determined to get the first swing in, That's certainly the case with Madeleine. She's seldom concerned with being liked, everything is secondary to her obsession with survival and the need to be able to rough it (in some of the film's more drily funny scenes she complains about the food at Para camp being too good). Madeleine is caustic, but you still see why Arnaud is drawn to her, beyond her looks, which are played down here, both by a lack of makeup and by Madeleine's perma-scowl, which goes away only very rarely. 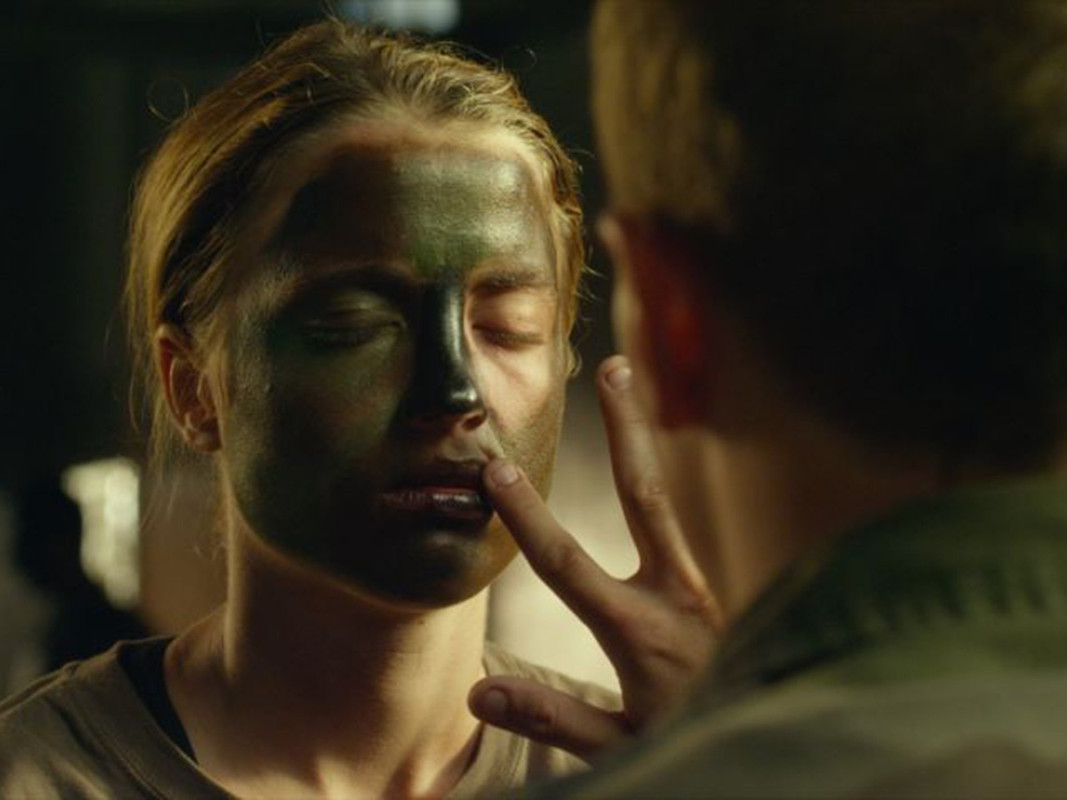 Haenel is brilliant, she commits totally to the character and her often destructive energy, but just as Madeleine radiates confrontational energy, Haenel radiates charisma. This has been the case since she first made her mark, aged 13, in Les Diables, but here you can't take your eyes off her, and her presence threatens to make the rest of the film struggle to make an impression.

Kévin Azaïs just about manages to stay with Haenel, and he becomes more effective as the film goes on and Arnaud becomes more sure of what he wants. To begin with Arnaud seems to be drifting – he only goes to Para camp to follow Madeleine – but after they become isolated together, living in the woods Badlands style having walked off a nighttime exercise, the two seem more equal, each of their strengths: Arnaud's calm and Madeleine's commitment, covering for the other's weaknesses. The chemistry between them is initially believably fractious, becoming credibly closer as the film rolls into its third act.

That third act starts well, with the idyll the couple have established in the forest slow fading into something else. The visuals contribute a lot to this. Cailley generally keeps things realistic, and there's an observed quality to the Para camp scenes, but in the forest we occasionally and increasingly get a dreamlike feel to the visuals, as the film builds to a climax that could initially be a literal nightmare.

Sadly, like Take Shelter, another film at least at some level about a personal apocalypse, Les Combattants ends up disappointing at the last minute. Here an abrupt change of tone feels as though it goes against the momentum the film has been building up. Ultimately it detracts only a little from an effective film and not at all from Haenel's deservedly Cesar winning performance, but it does mean that we're sent out on the only truly false note in the film.
★★★★ 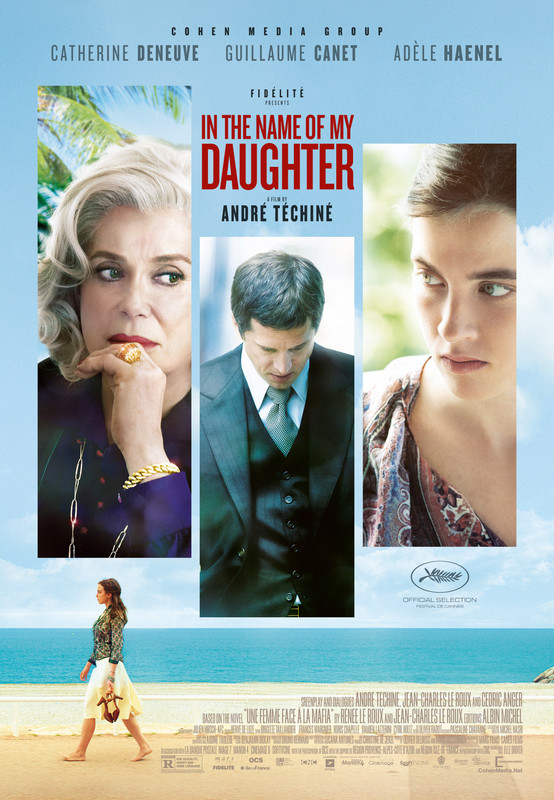 Based on a real case, French Riviera finds veteran filmmaker André Téchiné speculating about what really happened in the disappearance of Agnes Le Roux (Haenel) a casino heiress, who went missing in 1977 and of whom no trace has been seen since. Agnes had been in the middle of a battle with her mother Renee (Catherine Deneuve) over an inheritance of 3 million francs, and involved in a relationship with her mother's former lawyer Maurice Agnelet (Guillaume Canet). The question dogging the case and the film is whether Agnes simply decided to vanish, or Maurice, who ended up with the 3 million, pulled off a perfect murder.

At 116 minutes, French Riviera is a patient film. It takes time to lay out all of the relationships, to show us the complexities of at least some of the characters and to build the tension surrounding Agnes' disappearance, which we know is coming. Téchiné introduces that tension slowly. The relationship between mother and daughter always seems fractious, but for much of its first half the film is almost a romantic comedy between Agnes and Maurice. This serves a couple of purposes; first it lets us, in looking back, see what an arch manipulator Maurice is and see him perhaps recognising the opportunity that Agnes represents and laying a trap to catch her money in. It also allows us to be taken in by Maurice. Initially he's charming, and we see why Agnes; who has come home because she has just been divorced, is seduced.

In these scenes we see a different side to Haenel. Her screen persona is often hard-edged; a character hiding her problems behind a tough shell. Here there is much more abandon; Agnes is young and comfortably off, and at times she feels free to enjoy that. Early scenes between her and Maurice can be charming; one where he shows her a flat that she might want to rent and she jumps up and down on the bed and another that goes from charming to out and out sexual, as she performs an African dance for Maurice.

This isn't to say that Agnes doesn't have that toughness we're used to seeing in Haenel's characters within her, just that it is more than usually tempered by other things. That hardness comes through when Agnes votes against her mother at a pivotal board meeting, having been egged on by Maurice. Her tears show that it's difficult for her, but she's still steely and resolute in the action.

Deneuve and Haenel are well cast as mother and daughter (though Deneuve's age, however much she seems able to hold time back, would perhaps make her more plausible as Agnes' grandmother). Their personalities here both have that similar capacity to be brittle, and one suspects that if we could see a younger Renee we would see more of Agnes' carefree side in her. Together the two actresses do a fine job of sketching a mother/daughter relationship that is difficult because of the similarities between the two of them as much as the differences. Deneuve has her familiar regal bearing in the early part of the film, but is affecting as that is further stripped back as the casino she owns slips ever further out of her grasp. By the end of the film we find her grey haired, half blind, walking with a cane, but still displaying that streak of steel shared by Renee and Agnes.

As the final spoke in the story's central wheel, Guillaume Canet shifts credibly from nice guy lawyer who just wants to be friends to slimy cad as we find out more about him. Canet and Techine seem undecided as to whether Maurice was genuinely capable of Agnes' murder, assuming that's what happened, but there is enough here to support either the 'playboy' or the 'sociopath' assessment of Agnelet.

The first 90 minutes of the film lead slowly and credibly up to Agnes' disappearance, and that could be a chilling note of uncertainty on which to leave the film. What happened to this vivacious young woman? We may never know… credits. That's not the route that Téchiné takes. Instead we have a rushed 20 minute epilogue, with Canet and Deneuve in awful old age slap, running in almost embarrassedly perfunctory form through the first of three trials Agnelet has faced on matters around Agnes' disappearance. The film falls apart quite spectacularly in these last twenty minutes, and in doing so it doesn't even manage to tell the full story, relegating the two subsequent trials to captions before the credits finally roll. Ultimately, Téchiné needed either to have cut this epilogue or made a three hour film, in order to give the trials the same gravity as the lead up to them. Instead what we get is a tense little drama, with a rushed twenty minute panto bolted on to the end. It's a shame, and not what the preceding 90 minutes, or the performances in them, deserved.
★★★
Posted by Sam Inglis at 23:22