What I've Been Watching 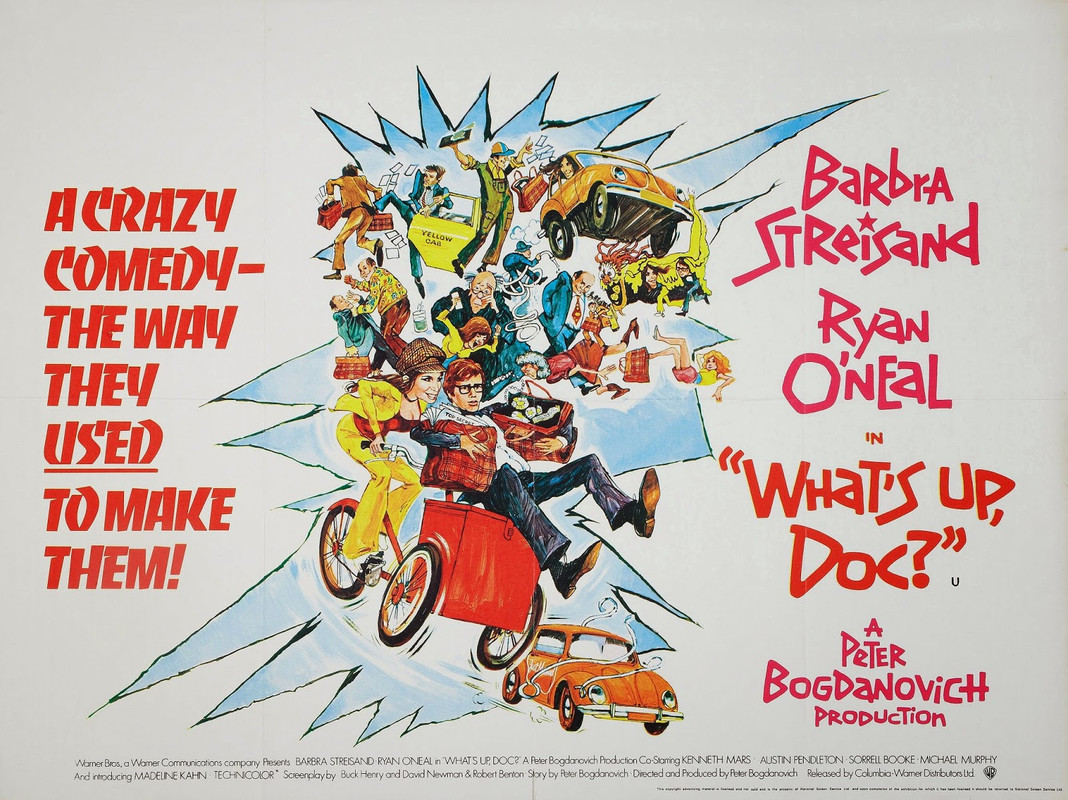 Peter Bogdanovich had an incredible early run as a director. His first four films (not counting an uncredited job for Roger Corman) were Targets, The Last Picture Show, What's Up Doc? and Paper Moon. An exploitation film that remains both relevant and scary, followed by three classics.

The plot, as in screwball comedies, is incredibly convoluted and couldn't matter less. For the record, it has music professor Ryan O'Neal getting caught up madcap adventures with the flighty Barbara Streisand thanks to the fact they both have plaid overnight  bags, exactly like two more that people are trying to steal from the hotel they and the owners of the other bags are staying in. All this nonsense essentially serves as an excuse for Bogdanovich and writers Buck Henry, David Newman and Robert Benton to riff on classic screwball, most notably Bringing Up Baby, which has a similar professorial type being pursued by a flighty young woman and is extensively homaged.

To review this film in a traditional sense is, to some degree, nonsense. Comedy, especially comedy that throws jokes at you as hard and fast as this one does, works or it doesn't. You either find it funny or you don't, and if you don't then no reviewer pointing out the things they find interesting - jokes or otherwise - is going to make it work for you. This is all I can say: for me, What's Up Doc? is likely among the ten funniest films I have ever seen. It's up there with the likes of Ghostbusters, The Princess Bride, The Man With Two Brains and, as it happens, Bringing Up Baby.

The jokes seldom stop, but what is great about the gags here is that they're not merely a series of smart lines; they arise out of the characters. Ryan O'Neal's buttoned-up professor - Howard - is so meek and mild that he's often as pitiable ("Yes Eunice") as he is funny and both of those things become even more acute as he's caught up in hurricane Judy. 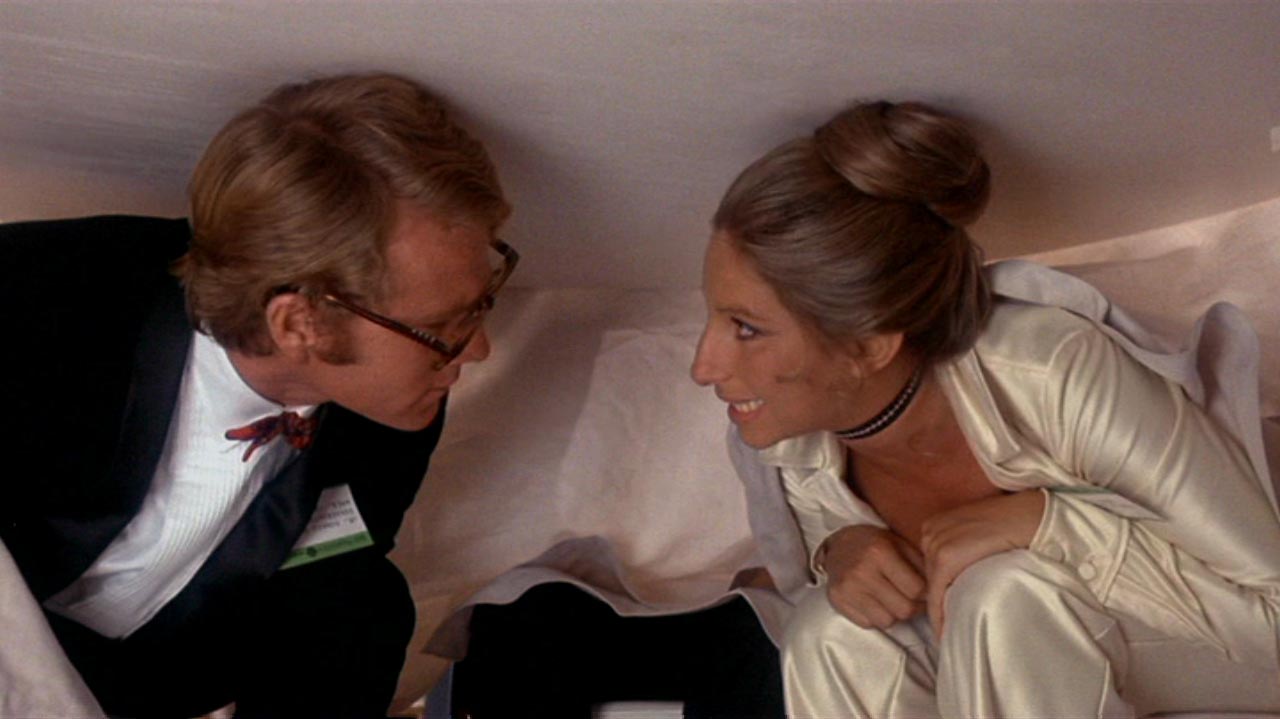 As Judy, Barbara Streisand is a ball of madcap, but intelligent, energy. She's clearly a con artist, but both because she does it with such charm and because her interest in Howard, though founded in seconds and for no reason, always seems genuine, she always has our sympathy. This is the first film I've seen Streisand in and, perhaps because I've found what I've heard of her music so unremittingly tedious, I was taken completely by surprise by her performance. Not only is her comic timing and her way with the wordy dialogue perfect, but she's just a ray of sunshine in the movie. The contrast between her and Madeline Kahn, making her film début as O'Neal's very proper fiancée, is hilarious and allows you to see how, despite the chaos she wreaks in his life, Howard ends up falling for Judy.

As well as the sharp dialogue, the film has a great line in physical comedy, from a great bit of hotel room destruction to a car chase that ranges all across San Francisco, jamming great gags together with impressive and well staged, shot and cut stunts. This is homage at its best: all the ingredients of this film have their roots in the films Bogdanovich loved growing up, but in remixing them he also freshens the ingredients up and shows his mastery of the process.

Ultimately the joy of What's Up Doc? for me lies in its relentlessness. The only time it stops being funny for longer than a few seconds is when Streisand (in a moment that feels entirely contractual) sings As Time Goes By. Otherwise, there is always something to laugh at, be it a great exchange between O'Neal and Streisand - like the film's gut bustingly funny final lines - or simply Kenneth Mars (as a rival professor) looking stuck up and irritated.

I would honestly struggle to recommend What's Up Doc? enough, and if I've not related many of the gags here that's entirely on purpose. Now go away and find out for yourself just how funny this film is.
★★★★★ 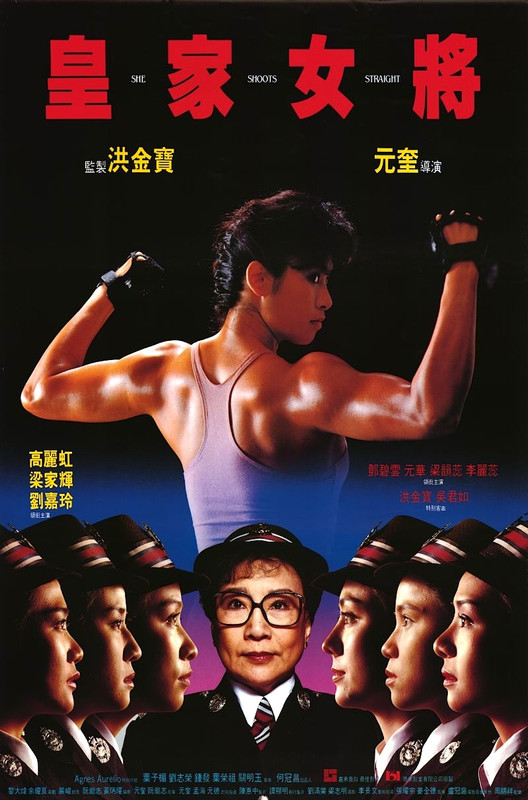 I've observed before that in martial arts cinema there is, essentially, only one plot: characters want something; another character is in their way; kicking ensues. That IS basically how She Shoots Straight (also known as Lethal Lady) proceeds, but if Ong Bak is that plot taken down a motorway to its conclusion then this film gets there via a series of country lanes; it feels slow and is frequently annoying.

She Shoots Straight is a vanity project; a Sammo Hung produced vehicle for his then girlfriend Joyce Godenzi (they've been married since 1995). This isn't to say that Godenzi doesn't merit the spotlight; she's a charismatic and impressive presence in a supporting role in Sammo's classic Eastern Condors and showed off some great martial arts there. If anything she deserved a far better vanity project to be in.

Godenzi plays Mina, an inspector in the Hong Kong Police. Her entire extended family; her husband (Tony Leung Ka-Fai) and his sisters are all cops as well, the sisters working under Mina. They are all assigned to take down a gang of Vietnamese criminals (led by Sammo's opera brother and go to villain Yuen Wah) who plan to rob a nightclub.

There are many, many problems with She Shoots Straight's story sections. Most martial arts films do little more than mark time between fights, but this one does it notably poorly. Mina's sisters in law all hate her, especially Chia-Ling (Carina Lau), who feels her brother is being taken away from her. This leads to many whiny scenes of the sisters arguing with Mina, they're supposed to be played for laughs, but are catastrophically unfunny. There are also many 'dramatic' scenes, either between Mina and the sisters or Mina and her husband, all so overblown that they are the film's comic highlights.

The fights are sporadic but generally impressive, sadly there's just not enough action. Set pieces at a fashion show, at the nightclub and on a boat are solid and give Godenzi and Lau some kickass moments, but it's only at the very end, in Godenzi's one on one with second string villain Agnes Aurelio, that it pulls out a truly great showdown. The stunts are often good, but slo-mo, which can really show off an impressive move, is overused here and there's a lot of emphasis put on gun action, which Corey Yuen isn't as gifted at staging as he is the martial arts. It's also a shame to see Sammo (who has a small part) and Yuen Wah get relatively little martial arts to do here, though Sammo's couple of moves are the best thing here, bar that final fight.

I wish I'd liked She Shoots Straight more because Godenzi is clearly better than this rather confused and often boring vehicle. She's a strong presence, here marooned in a film that doesn't deserve her.
★★
Posted by Sam Inglis at 20:55