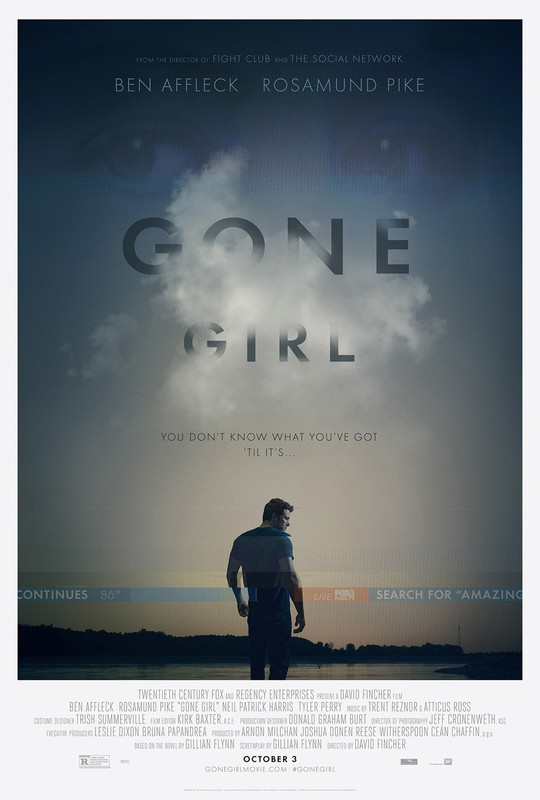 Gone Girl is a contradictory piece of work: it's trashy and tawdry, pure pulp, but it's also classy; precisely crafted and looking to award season with a degree of expectation.  These are things that David Fincher has previously combined to brilliant (Se7en) and numbingly pointless (The Girl With The Dragon Tattoo) effect. Sadly Gone Girl, while it has more reason to exist than Fincher's last, ends up leaning more towards the latter.

Based on Gillian Flynn's novel, and adapted by Flynn herself, the setup of Gone Girl sees Amy Dunne (Rosamund Pike) vanish on her fifth wedding anniversary from the home she shares with her husband Nick (Ben Affleck).  As the investigation continues details emerge about Nick and Amy's lives and their marriage which throw suspicion on Nick.  That, of course, is only the premise, but to say much more would be to spoil the film for those, like myself, who come to it without having read the novel and that would be a shame because one of its undoubted strengths is the fact that the plot twists genuinely throw you for a loop.

There is, on the surface, much to recommend here.  As you might expect of a craftsman as assured as Fincher, the film looks impeccable.  There is a coldness to his eye here that renders suburbia something foreboding, visually and geographically removed from the grimier part of town where The Bar, which Nick owns with his twin sister Margo (Carrie Coon), is found.  Every frame is perfectly composed, reeking of design, and the camera movement follows suit.

Similarly there is little outwardly wrong with the performances.  Affleck does some of if not the best work of his career.  A TV interview late in the film is full of meaningful touches that resonate with scenes from right back to the start of the film.  Rosamund Pike, given a standout role as Amy, grabs hold of the part with both hands and owns every scene she's in.  As far back as her debut as a bad Bond girl in Die Another Day filmmakers have recognised Pike's icy quality and it seems perfect that she was once the lead in a play titled Hitchcock Blonde.  Fincher uses and manipulates those attributes in Pike to  striking effect.

Many of the film's best roles are for women and perennial supporting player Kim Dickens, as a thoughtful, methodical detective and Carrie Coon, in her first, potentially star making, film role as Margo; dragged into events simply by being related to Nick both give strong performances and are allowed to be more than just props to move the action along.  Perhaps the biggest surprise is Tyler Perry, regarded by people who aren't fans of his Madea films as at best and irritant and at worst an embarrassment, he here turns in a credible and authoritative dramatic performance as Nick's lawyer, Tanner Bolt.

And yet, as there is a dark underbelly to Nick and Amy's marriage there is a flipside to many of the virtues of Gone Girl.  It IS perfect looking, designed to within an inch of its life, and perhaps the coldness that that design gives the film is exactly what Fincher and his brilliant DP Jeff Cronenweth intended.  Still, I can't deny that it meant I could see them behind every shot, that the film held me at a distance, almost as if I was watching it being directed rather than watching the story unfold.  Surprising as the events of the story are, I found myself so aware of their assembly that I was never fully engaged with them. 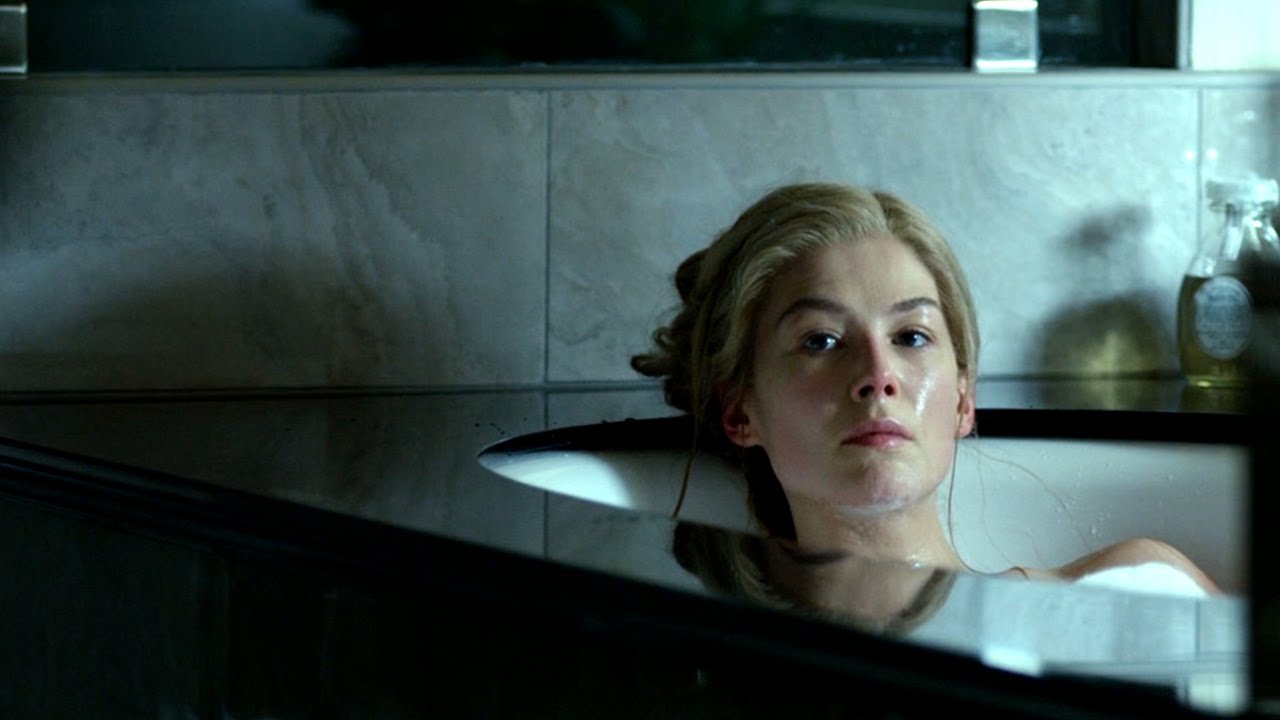 The performances ARE largely excellent (though Patrick Fugit gets lost in the shuffle and Missi Pyle is too hammy as TV news reporter) but they all feel like performances.  This, again, may be down to the fact that I could always feel Fincher's hand driving the film, which, controlled as they are, I never have in his other works.  It's particularly true of Rosamund Pike.  Again there is perhaps intent in this; a sense that we're supposed to feel that Amy is always playing a role, but this is something that I've felt has been done better in a lot of previous Neo-Noir.  Pike is an actress I've long been a fan of, and she's clearly been directed to this performance, which is technically difficult to fault, but it's that very technicality that was the problem; I could always see the cogs turning, in a way I can't usually when I see her on screen.  It would be easier to say that this was just a choice about Nick and Amy's characters if the same feeling weren't present in most of the other performances.  I found it particularly forced with Neil Patrick Harris' character.  Perhaps Fincher is trying to externalise the idea that everyone has a hidden agenda, but it's just one more thing that kept me very aware I was watching a construct that I felt more and more removed from even as I admired its craft.

For its first two hours Gone Girl strains credulity progressively more and more, with a plot that hinges so completely on everything going exactly to plan and everyone behaving just as expected that it is always on the knife edge of seeming ridiculous, but it's only in the last 30 minutes or so that the balance falters and my suspension of disbelief went from strained to snapped.  Up to that point I just about believed that the main characters would behave as the narrative needs them to, but that stopped being true after the big twist that heralds the film's long coda.  This might be less of an issue if Gone Girl had been more embracing of its pulpiness from the outset, but amping up those elements feels an odd fit with the prevailing tone of the film.

Watching Gone Girl I kept thinking of John Dahl's great film The Last Seduction, which is as pulpy as any 90's neo-noir and has many elements that echo here, including that cold tone.  For me Dahl marshals and combines those elements much better, into a film I am much more absorbed by.  David Fincher and his cast and crew are exceptional craftsmen, but the more I think about it the more my experience of Gone Girl is one of watching them build a beautiful empty vessel.
★★
Posted by Sam Inglis at 17:21