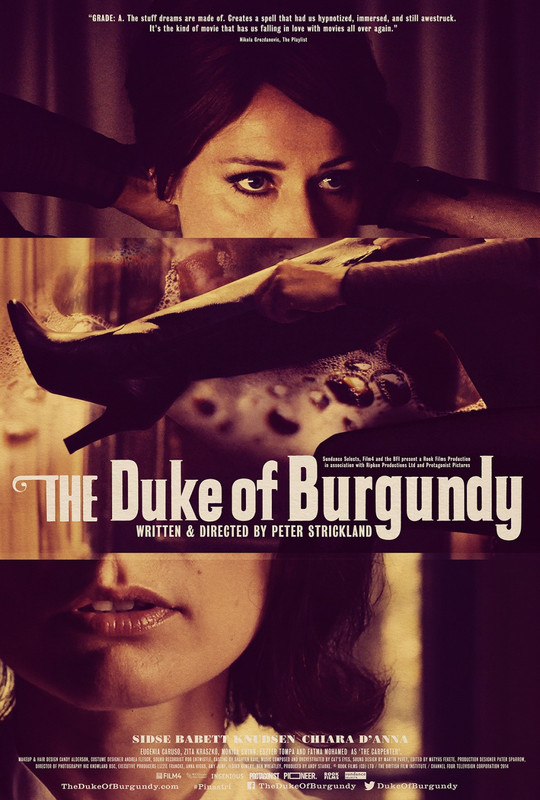 Having got little from Peter Strickland's last exercise in a horror sub-genre (the Cliff's Notes on Giallo that was Berberian Sound Studio), I was wary of his latest, worried that it would again feel to me more like a textbook on a type of cinema than a film in its own right.  The Duke of Burgundy is certainly a film steeped in film history and film academics, it's an art piece exploring a particular style and genre, but this time I found that Strickland drew me in to his characters and his story as well as his use of images and sound.

As the film begins we see Sidse Babbet Knudsen playing Cynthia, who seems to be a wealthy woman, living in a huge, opulently decorated, but otherwise empty house.  Her maid Evelyn (Chiara D'Anna) arrives and Cynthia spends the day coldly assigning her chores, punishing her when they are not done to her incredibly exacting standards.  As the film progresses we see that these dynamics are not all they seem, and that Cynthia and Evelyn's relationship is much more complex than it first appears to us.

There are moments throughout The Duke Of Burgundy that reflect many different styles of film, though largely from one era; the late 60's and the 70's.  The striking opening titles are pure Witchfinder General, while Cat's Eyes' score is one of several things that echo Czech surrealism, calling to mind Broadcast's alternate score for Valerie And Her Week Of Wonders.  However, among all the influences one shines through; the European Artspolitation scene.  There are things throughout that reflect the erotic horror films of Jean Rollin and Jesus Franco, few of them more than Chiara D'Anna's face.  D'Anna is astonishingly beautiful, but more than that she could easily have stepped out of a Rollin film and into this one.

All this said, I don't wish to suggest that The Duke Of Burgundy is merely a patchwork of its influences.  Peter Strickland's style may have changed following his micro budget and much more simple début, Katalin Varga, but he has definitely developed an eye that is his own.  There are many striking and puzzling visuals in the film, from the prevalence of butterflies (including the one that gives the film its title) to the presence of a mannequin in the audience at one of the lectures that Cynthia gives, but for all its abstraction there is a strong throughline to the film in our shifting understanding of the relationship between Cynthia and Evelyn.

Once it becomes clear that Evelyn's job as maid is not a job but a persona, put on as a fantasy, the film shifts, going from being something potentially about an abusive business relationship to a story of a power game within a romantic relationship.  What is most interesting is how Strickland shifts the balance of that power game throughout, challenging your assumption of the dom/sub power play throughout.  What emerges from this; built out of a picture of gorgeously lensed repeated moments is a surprisingly funny and tender picture of what we must assume is a long term relationship.  That, ultimately, seems to be what the film is about; a couple who have had a (strange) rhythm for some time, surrealism and a slight overtone of foreboding seep in as that that rhythm is disturbed.  This tenderness is always present, even as Cynthia and Evelyn discuss Evelyn's birthday gift in a conversation that features the memorable line “Perhaps a human toilet would be a suitable alternative”. This is perhaps why Strickland chooses not to depict the sexual side of the relationship in much explicit detail; there is no nudity in the film and the one sex scene is shot with many doubled images, as if through glass, giving it a hallucinatory feel.  In another way this is an odd choice; The Duke Of Burgundy is so steeped in the more artistic aspects of the artsploitation film that it was, for me, a shame not to see Strickland dig into those films' equally valid exploitation side.

Whatever ideas I have about this film, from whether it's a love story to the fairy tale feeling that seems to bracket it in the first and last images of Evelyn, there is much more that I have yet to unpick.  Most notable is the last time Evelyn says Cynthia's name, at which point it sounds very much like she says “Sidse”.  Whether this is a mistake, something I misheard or an intentional lapse in the film's internal continuity I don't know, but none of those answers would surprise me and none of them would be less than interesting.  That goes for many of the unanswered questions of the film. 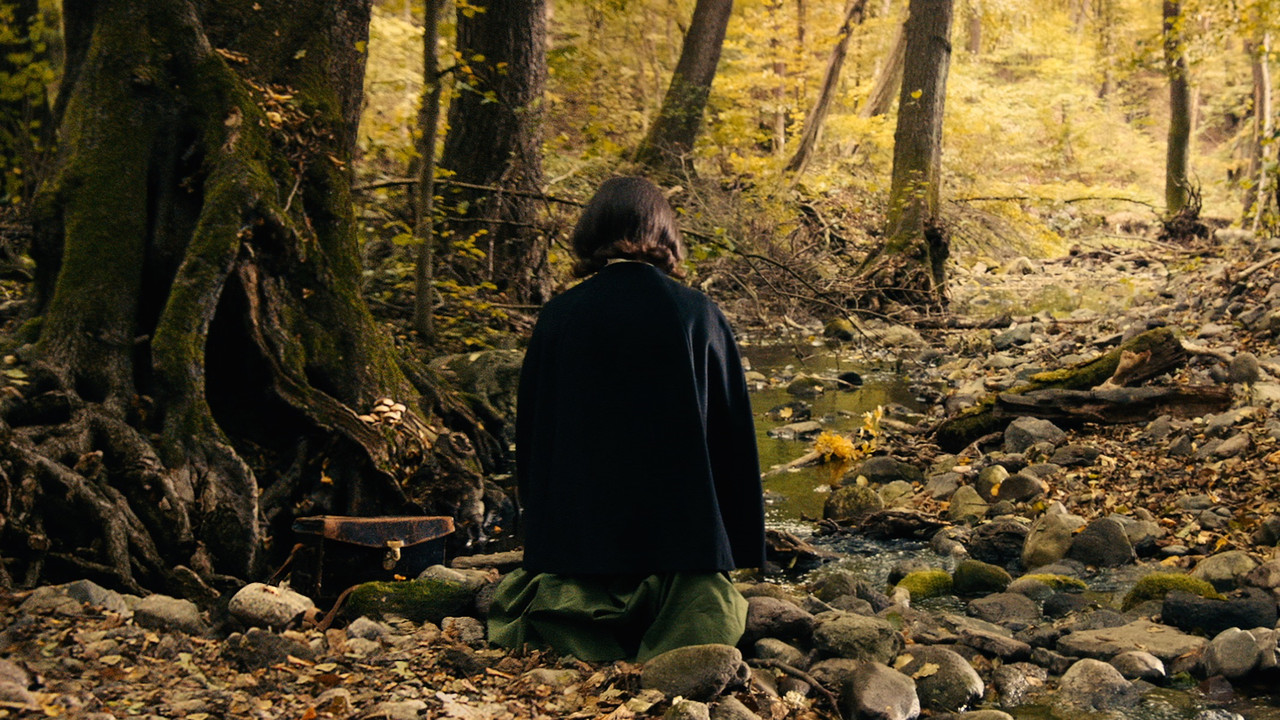 All of this works as more than an art piece because the images are anchored by excellent performances.  Sidse Babbet Knudsen initially does a great line in cold, withering, glances and harsh tones as Cynthia, but her part becomes more complex as the film goes on and we start sensing some conflict in her, from a little sigh when she drinks yet another glass of water to prepare for a game to an increasing disengagement in her rote repetition of the script for each game.  Through all this she also puts across Cynthia's longing for closeness, even if it is found in a way that most of us would consider unconventional.  Chiara D'Anna's Evelyn is a more unknowable character and the ambiguity of certain aspects of her character extends to the film as a whole (for instance a few scenes seem to imply that she may be the rich woman in this relationship, but equally that may be a part of the role play).  D'Anna does a huge amount simply through her presence which is by turns ethereal, sexy, demure and severe, among many other things.  This is the first time I've seen her, but she's a memorable presence, one I hope to see more of.

For all its artsiness, which may grate on some viewers, The Duke Of Burgundy has a surprising streak of humour running through it.  There is an inherent comedy to seeing familiar relationship issues played out in such an unconventional relationship, especially when, late in the film, Evelyn admits to a 'fling', in which she cleaned another woman's boots and was scolded by her.  The humour is an interesting balancing act; Strickland doesn't parody his influences, but there is a wryness here that might have enlivened Berberian Sound Studio for me.

It's not perfect, and I did find myself, every now and then rolling my eyes at some of the film's most obscure moments.  I don't really get what is clearly a big overarching metaphor about the moths that Cynthia studies (with Evelyn's help?)  It certainly doesn't feel to me like a film about metamorphosis, the one thing that does strike me about it is the theme of confinement; the moths all pinned in glass boxes set against Cynthia's desire to be locked in a box at night.  Equally those two things may have nothing to do with each other.

Repetition is part of how the film establishes both its story and its humour, but occasionally seeing the same scene and hearing the same dialogue for a fifth time can become a little wearing.  With just a bit of judicious cutting it could lose ten or fifteen minutes and I doubt it would lose any real meaning or impact with them.

I loved The Duke Of Burgundy on a lot of levels; it's a sensory experience that demands to be seen in a cinema, thanks to the combination of Strickland's offbeat and beautiful images and Cat's Eyes' score.  It's also an absorbing character piece; Knudsen and D'Anna are perfectly cast and Cynthia and Evelyn's relationship is never less than intriguing.  It's a film that invites many readings, but I most enjoyed getting lost in its images and its influences, but they'll draw me back and make me think more and perhaps differently about the film next time I see it.  That's rare.
★★★★
Posted by Sam Inglis at 08:49