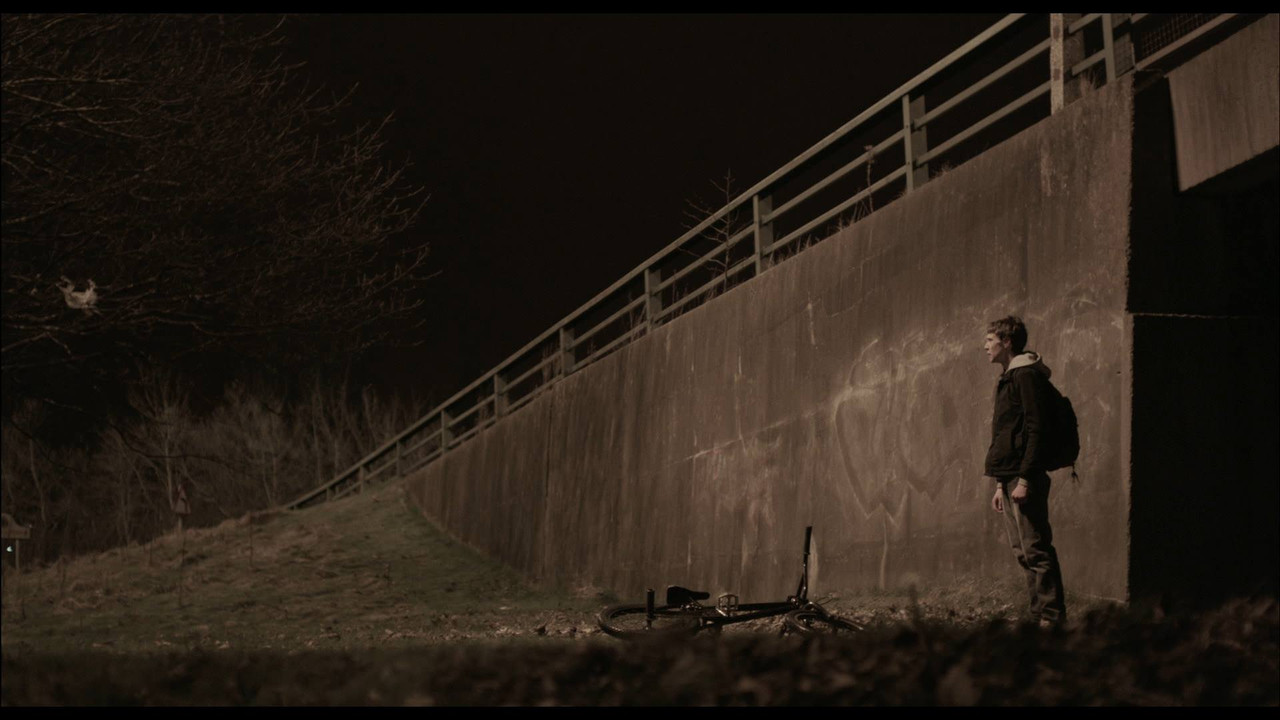 Better Things director Duane Hopkins has taken his time following up his debut, which I managed to miss when it came out five years ago.  I'm not exactly desperate to play catch up having seen Bypass.

Tim (George McKay) is in his early 20's.  His mother has died, his older brother has just been released from prison and he has turned to low level crime in an attempt to eke out a living for himself and his younger sister.  As the film proceeds, Tim finds himself falling deeper into the criminal world and struggling with an illness that is becoming serious.

As you might gather from that synopsis, Bypass is rather by the numbers stuff. Story wise, there's little here that hasn't been in another dozen British crime or council estate misery dramas in recent years.  Hopkins tries his level best to disguise this with his stylistic choices, but he fails miserably.  Bypass is perhaps the most self-consciously, self-regardingly, over-stylised film I've seen this year.  Almost every shot in Bypass is a soft focus, moving, close up on something.  Tim and the other characters are almost never seen in a full length shot and the camera is constantly searching, moving around to try and find every insignificant detail that it can (almost) focus on.  Hopkins doesn't stop at this.  His use of slow motion is also out of control (usually in combination with his 'meaningfully' shallow focus and off kilter framing) and the use of sound can also be grating, returning to the same trick of starting a scene's dialogue long before its visuals over and over ad nauseum. Without Hopkins' obnoxiously artsy approach, Bypass would just be banal, with it is is beyond grating.

More irritating than Hopkins' limited and repetitious artistic ideas is the fact the overuse of them means that they fall flat when Tim is at his most fraught.  In these moments the lack of focus and moving camera might reflect what's going on in Tim's mind, but because Hopkins uses these techniques as a crutch throughout the film they are robbed of that meaning.

The news is little better when it comes to the performances.  George McKay and Benjamin Dilloway are both hit and miss as Tim and his older brother Greg.  McKay has a few good moments, and his performance has a physicality that can be effective.  His best scene is perhaps an incredibly realistic and difficult to watch fit that Tim has, tellingly it's a silent scene.  When he has dialogue McKay turns in a flat performance, largely unencumbered by expression.  Still, he's light years better than either Chanel Cresswell as his younger sister or Charlotte Spencer, who is disastrously monotonous as his girlfriend.

To be fair, only some of this is the fault of the cast.  It's tough to make something out of nothing, and nothing is what Hopkins' screenplay gives them to work with.  The characters are all empty suits.  Tim is quiet and pliant, which makes his the most detailed characterisation in the film.  Of course Charlotte Spencer is dreadful, her character Lily barely has anything that counts as a trait, let alone a personality, so what chance does she have to do anything with her performance?  The limited dialogue is as poor as the character writing and the plot turns in ways that are ever more trite and loaded with implied but unfulfilled meaning, building to a staggeringly awful last ten minutes.  The ending is so wrapped up in the cleverness of its visual devices (the same visual devices we've seen for the past 90 minutes) that it completely fumbles its message.  Is it supposed to be redemptive or the restarting of the same cycle?  Who knows and, frankly, after this who cares? 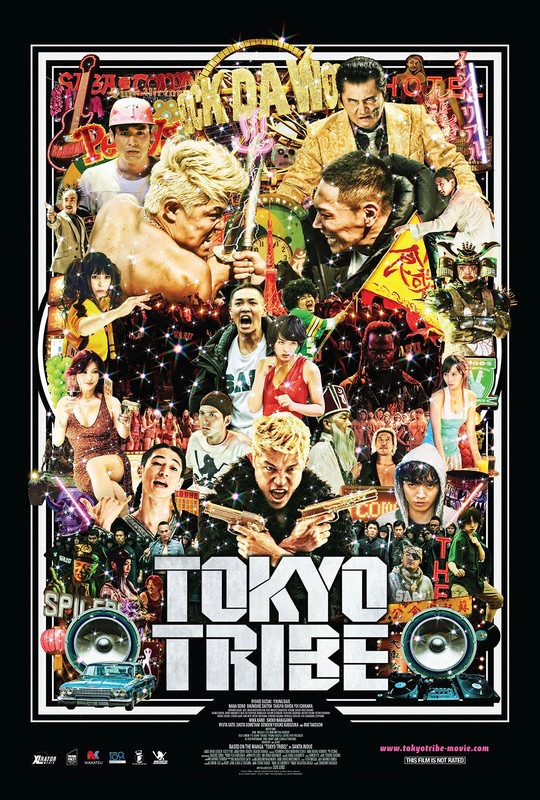 Sion Sono might be 21st century cinema's foremost absurdist.  That's not to say that there isn't more to his films than their craziness, but that is often their defining feature and seldom more so than with the blisteringly energetic and relentlessly bonkers Tokyo Tribe; a Manga- based post apocalyptic hip hop musical, jam packed with martial arts action. In other words it's pure, unrefined, Sono.  This is both great and a little problematic.

The story, such as it is, is introduced by an MC (played by Shota Somentani, the lead in Sono's Himizu and one of several cast members who recur from the director's earlier work).  He introduces the gangs who now rule Tokyo society and vie for dominance and also acts as a sort of greek chorus for the film.  The main thrust of the plot involves a gang headed by grotesque mob boss Buppa (Riki Takeuchi) and his enforcer Mera (Ryôhei Suzuki) trying to destroy all the other gangs one by one so that they can rule Tokyo but Kai (Young Dais), the peace and love promoting leader of a Musashino gang wants to fight back. To do so he teams up with Sunmi (Nana Seino), who has escaped being kidnapped for Buppa's brothel.

Sion Sono often makes long films, and while Tokyo Tribe has a relatively conservative running time of 116 minutes there is enough packed into it for it to be twice as long.  Earthquakes, gatling guns, bizarre side characters, penis envy, satanism, a Caligula inspired wall of death and pinku style sexploitation all raise their heads at some point and that doesn't come close to covering all of the oddness on display.

As you would expect given that description and Sono's history, Tokyo Tribe is blazingly energetic and inventive.  The opening sequence introduces us to all of the gangs through the device of a gang member using a knife to demonstrate their relative positions to a female cop he's holding hostage.  Each gang also gets a showpiece rap at this point that cements a style for their contributions throughout the film.  This is a great choice by Sono because otherwise, with so many factions, the film could easily have become messy.

While there is an overarching story and a message (be nice to each other), Tokyo Tribe largely unfolds as a series of linked setpieces.  This being the case, the energy level seldom drops and the film can be exhausting, but every scene is packed with gleeful little details to keep you totally engaged.  Perhaps my favourite of these comes early in the film when Buppa is served his tea by a beatboxing girl.  It's so incongruous and comes so out of the blue that I can't imagine anyone not falling for the film, at least briefly, in that moment.

This isn't to say that all the fun of the film is in its margins.  Takeuchi and Suzuki overplay everything, providing more ham between them than you'd find at the buffet table of a pork butcher's convention, but because evrything is so heightened here it works brilliantly.  Suzuki's unhinged Mera is especially great; a preening, perpetually half naked psychopath whose motivation, when it is revealed late in the day, is perhaps the film's best and its most juvenile joke.  There are also charismatic turns from Nana Seino, whose Sunmi goes convincingly from exploited innocent to badass fighter and from Kikoto Sakaguchi as her young sidekick whose martial arts moves use breakdance to bone breaking effect.  The only real issue with the performances is that, amongst this strong cast, Young Dais comes off a little bit dull as Kai.

The music is great, the insistent beats power the film along even when scenes lapse out of rap and into normal dialogue and there is a great variety in both the skills and the styles of rap on display.  Riki Takeuchi, for instance, is no MC, but he doesn't have to be because you get the sense that Buppa's rapping is only tolerated because if it's not he will literally kill someone.  Most of the main cast do a good job with what must have been a challenging task for those of them not from the music world.  Only Shota Somentani lets the side down a little, with a flat tone that never generates a great sense of flow.

There is so much to enjoy in Tokyo Tribe. The martial arts sequences, which are varied and brilliantly shot and choreographed, have an energetic brutality throughout , but there's also such fun in the details; the truck with chandeliers for headlights; the nod to Scarface with Buppa's 'Fuck Da World' globe sculpture and so many more.  The design is stunning and overblown throughout, never more so than in the room full of living furniture owned by Buppa's son Nkoi (an intensely creepy Yosuke Kubozuka).

The problem with this being, as I said, pure unrefined Sono is that there are a few troubling things here.  Tough as it is to take the film's sexual politics seriously, they can make you a little queasy.  With the exception of Sunmi (who has her own troubling scene early on), all of the women in the film are depicted purely as objects, most of them, at some point, stripped.  The most exploitative and uncomfortable moment comes early in the film when a female cop, who we never see again, is stripped.  This is perhaps the one moment where the exploitative tone eclipses the absurdity and becomes offensive.  This isn't new territory for Sono, but ultimately it's more muted and less troubling here than in, say, Himizu, because the film isn't asking us to take it seriously at that level.

Ultimately you have to take Tokyo Tribe for what it is; a relentless and rather silly entertainment.  I can't imagine you failing to have at least some fun with it at that level.
★★★★
Posted by Sam Inglis at 16:20