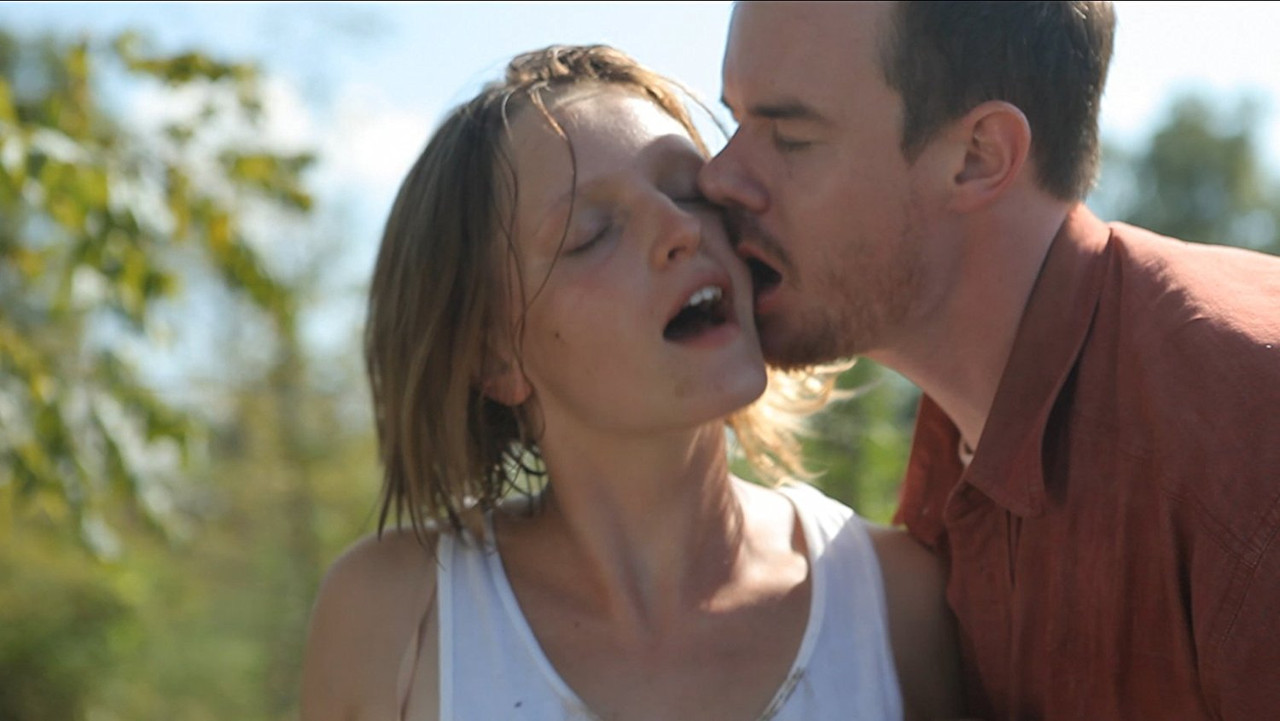 I didn't get in to the mumblecore movement to begin with, but I've found myself warming up to it more and more recently, especially when it inches closer to genre.  Josephine Decker's second film (her debut, Butter On The Latch, is also playing at LFF) is hardly a mainstream effort, but it has an atmosphere that sets things on edge from the off, making you feel as though at any moment it could head off and become something more generically typical.  The fact it (mostly) doesn't is what helps it keep gripping you.

The film is set on a farm, run by Jeremiah (Robert Longstreet) and his innocent looking 20 something daughter Sarah (Sophie Traub).  They have hired help for the summer in the form of Akin (Joe Swanberg).  The atmosphere between the three is odd, and becomes more so as Akin seems to develop a fixation on Sarah, an attraction which may or may not be reciprocated.

I don't want to give too much away about how Thou Wast Mild And Lovely develops, because one of the film's great pleasures is seeing how its constantly uneasy tone evolves and pays off.  That unease is immediately striking in the way that all of the character relationships seem a little off... does Jeremiah look at his daughter, or indeed his new farmhand (who he calls 'Shoulders') a little too intently?  Is Akin's increasingly sexual gaze towards Sarah returned?  These things are open to interpretation, but it's clear when, in one of the film's most memorable and quietly chilling moments, Sarah says that she would have a baby "if Daddy would let me" that all is not well, and perhaps not quite what it seems, on this farm.

Sometimes the film's ambiguity is frustrating.  In one sequence we see Sarah lying on the grass, seemingly in some sort of (pleasurable) trance.  Then we see what she appears to be hallucinating; tools and hands floating in front of her eyes.  Is this the film's most obvious symbolism?  I suspect there's more to it than that, but unpicking what it means will probably take more viewings.  In this sequence and throughout, Decker and DP Ashley Connor's images are well chosen and beautiful.  At times the film's fixation with nature and people working and living in it feels Malickian, but Decker takes this to near parodic lengths mid-film, with a flashback sequence from a cow's POV, and the tone always sets the film apart from this influence.  In conjunction with the images, again setting the whole film on edge, is an often discordant soundtrack that suggests something underneath even the film's calmest and loveliest shots.

Largely a three hander, Thou Wast Mild And Lovely stands or falls on the strength of its cast.  Mumblecore auteur Joe Swanberg continues to prove that he's as effective a collaborator as he is a filmmaker in his own right, with a quiet and sometimes disquieting performance as Akin.  One of the things that is most notable is how his reactions, as much as those of Jeremiah and Sarah, become stranger as the film goes on.  It's particularly notable when Jeremiah makes disturbing reference to a 'roommate' and Akin almost completely ignores it.  Sophie Traub is a real find; you can see how her serene beauty would draw Akin in, and she manages to suggest both naiveté and calculation, often in the same moment, making us question whether Akin is simply drawn to her or being reeled in.  Jeremiah is a slightly broader character, but Robert Longstreet makes him someone to be wary of in many ways, without undermining the film's carefully maintained ambiguity of genre.

Josephine Decker only really stumbles in the last ten minutes, when the film makes a more distinct shift into genre territory.  It's not badly done, but the turn is more obvious than you'd like and the gear change, though slight, clunks a little.  Still, for the bulk of the film Decker's direction is superbly controlled.  She uses handheld camera well, the frequent fast motion forcing our eye when frames come to rest.  In this way she finds as much implied menace in stillness as she does in more hallucinatory moments.  Thou Wast Mild And Lovely is a confident work, slow paced but still lean at just 77 minutes, it's an uneasy and gripping piece that suggests an interesting new talent behind the camera.
★★★★ 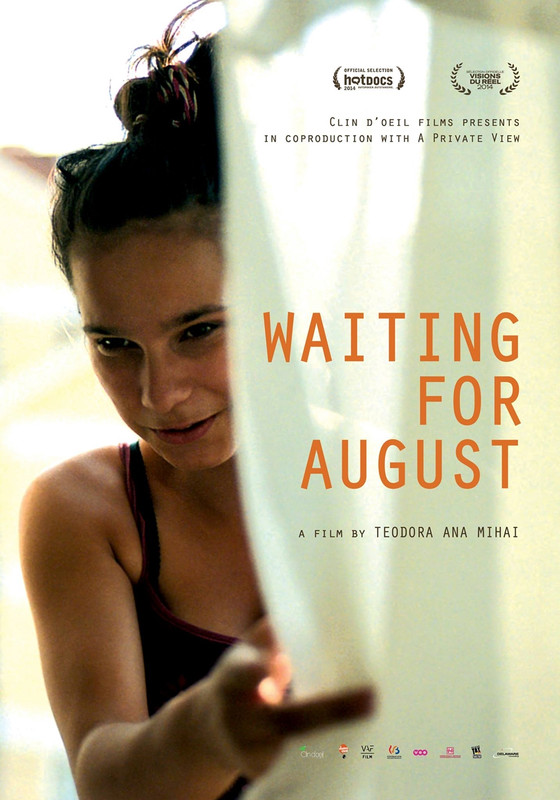 I'm stuck.  I don't know what to write.  I think this is my fault rather than that of Teodora Ann Mihai.  You see, I loved Waiting For August, but I completely misread it.  Apparently this is a fly on the wall documentary, and I took it for minimalist, heavily improvised, fictional cinema.  I don't quite know what this means.  Does it mean there is a flaw in the documentary technique in that it fails to communicate the film's events as purely factual?  Perhaps, but it's not trying to fool us, nor is it American Teen, a 'documentary' so contrived that it not only feels dishonest but like a bad genre film.

Either way, the events are the same.  15 year old Georgiana lives in Romania, she has six siblings (all but one of them younger) and has been left in charge while their Mother, who can't make ends meet at home, works in Italy as a maid.  She cooks, cleans and tends to the younger children, all while juggling school and being a teenager.  Mihai's camera observes Georgiana and her family with an honest, but sympathetic and ultimately optimistic, eye.  She often lets scenes play out at length, displaying the family dynamics and the individual personalities of the kids.  It is Georgiana who makes the strongest impression.  The film paints her as a smart, responsible girl who absolutely loves her brothers and sisters, even when she gets frustrated caring for them (she is often seen asking her six year old brother, who cries a lot, to give her a kiss).  Without seeming to show off or pretend to be something she's not for the camera, Geo (as her family calls her) demonstrates a natural presence that I took as that of an exceptional young actress, but which, it seems is that of a young woman who is, the film makes clear at one point, is less of an exception than we'd like to think.

Ironically it is perhaps the lack of an overarching 'plot' that led me to misread this film as fiction.  Lately we have become so used to documentaries using fictional tropes and imposing a narrative that the purely observed nature of Waiting For August made it feel more akin to a fictional piece, especially one from the Romanian New Wave.  There are events - there is talk of the possibility that the children will be taken into care, considered abandoned by their mother and Georgiana clearly puts a lot of import on her exams as she tries to get into the high school of her choice - but none of the threads develops into a full narrative, they are, like everything, snapshots of days.  The closest thing to a narrative throughline comes in the conversations by phone and by Skype between the children and their Mother, which are delightfully human moments of connection.  The kids are largely preoccupied with what Mum will be sending them, while she says how much she loves and misses them.

What I appreciated most about Waiting For August in my misreading of it, beyond the skill with which it is shot and assembled, I still appreciate about it as documentary.  It would be very easy to focus on how desperately hard life is for this family.  After all, they are living for about nine months without their Mother because that's the only way they can afford to eat, but the film focuses less on their problems than on the way they deal with them.  Yes the kids argue, but you can feel and see the love they have for each other and how hard Georgiana in particular works to be a good surrogate parent.  This isn't a film about problems, it's not a sad or a depressing film.  This is a film about solutions, about how people deal with difficult circumstances and keep a smile on their face.

I don't think it is a problem that I misread the film (certainly the LFF programme doesn't make it clear that it's a documentary), it remains an absorbing portrait of a family and their situation, the fact it's a true portrait only makes it more intimate and immediate. Given that this is a documentary I hope that Mihai will return to the story in due course.  I was so engaged by Georgiana and her family and I hope that a few years from now cameras will find them doing well, but whether they do or not, Waiting For August is an excellent film in its own right and one I would recommend you check out at LFF.
★★★★
Posted by Sam Inglis at 16:39