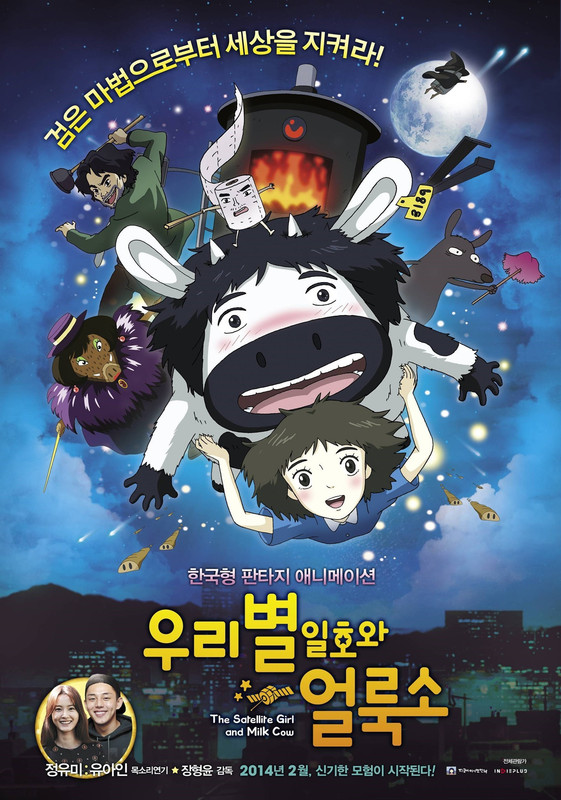 One of the problems with being a film critic is that, quite often, it can feel like we've seen it all.  And here we go again... just one more story about a broken down satellite that turns into a girl when it hears a young man singing.  Falling to Earth, she finds the young man, who, broken hearted, has been turned in to a cow.  Together, along with a wizard who has been turned into a magical roll of embossed toilet paper, they must evade a sentient monster incinerator and a man with a magical plunger who wants to steal the cow's liver.

You know.  That old story.

The Satellite Girl and Milk Cow is a film as odd as its title, and that's where it draws a lot of its fun from.  You could call it a fish out of water comedy, with Il-ho (the satellite) taking human form and having to learn how to deal both with interacting on Earth and with the complicated reality of human emotion, both hers and Kyung-chun's (the cow).  There are plenty of laughs to be had in this side of the film and while many of them (Il-ho breaking down when she eats some of Kyung-chun's grass, for instance) are designed to appeal to young kids, they're also likely to make parents laugh.  Merlin, the wizard turned into a luxuriously soft roll of embossed toilet paper, is an especially reliable source of laughs.  The film seldom uses him for toilet humour, instead getting laughs by juxtaposing what he looks like with his very serious and forceful personality.

The film also has a poignancy about it.  This isn't always its strongest suit, but to the film's credit there is a sincerity to the way it wears its emotion on its sleeve, and it can be forgiven for feeling a little rushed and simplistic given that it is pitching at 8 year olds.  That said, you would have to be a hard person indeed for the shifting relationship between Il-ho and Kyung-chun not to tug your heartstrings even a little bit.

The animation here is good, somewhat Miyazaki inflected, but not quite up to those technical standards, nor can it quite match the deft mix of brilliant animation and emotion in the films of Makoto Shinkai or Mamoru Hosoda.  However, the character design is engaging and appealing, and director Chang Hyung-yun finds many funny and moving images throughout the film, particularly as it comes to a crescendo in the last ten minutes.

The Satellite Girl and Milk Cow is ultimately a bit lightweight for an adult audience, it suffers, a couple of times, from going for a musical montage over a more complex emotional payoff.  It should delight its target audience though, and if you do take your kids to see it you will be rewarded with a fun, silly, strange film that, at the very least, will tell you a story you haven't heard before.
★★★
Posted by Sam Inglis at 21:10