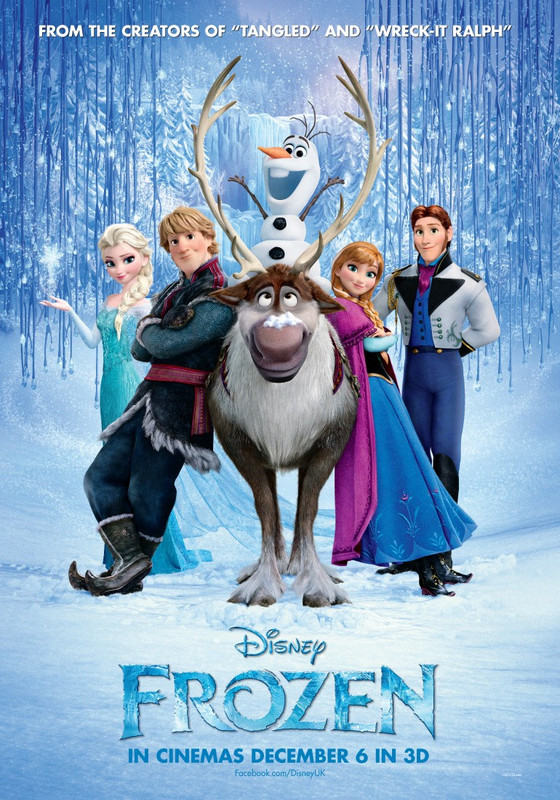 Frozen has one of the worst trailers in recent memory.  It paints the film as Tangled in the snow.  This is bad on two levels, first, Tangled is a great traditional Disney movie and signs that the company is now trying  simply to imitate it suggest serious creative issues.  Second, and perhaps more pressing, Frozen is nothing like Tangled.  It has some familiar Disney elements, but the focus is different in terms of character, story and tone.

Based loosely on The Snow Queen, the film focuses on two royal sisters Elsa (Idina Menzel) and Anna (Kristen Bell).  Elsa has magical powers that allow her to create ice and snow, but her power is growing with her and because of fears she will, accidentally, seriously harm her sister she is hidden away, even after their parents die in an accident.  On the day Elsa ascends to the throne the gates of the palace are opened and the sisters see each other for the first time in years, but when the sisters argue Elsa's powers are revealed and she runs to the mountains, plunging her kingdom into winter and sending Anna chasing after her.

Somewhere in that synopsis Frozen also finds room, with varying success, for a couple of romances, trolls, and a talking snowman who likes warm hugs, but the crux of the film, the emotional centre, always remains Anna and Elsa's relationship, which is charmingly set up in the first ten minutes of the film.

To begin with it's not entirely clear what Frozen is going to be.  The first half hour is crammed with incident, fast forwarding through events and through the Disney fairytale playbook at a rate of knots.  I began to fear that this was going to be a very rushed exercise in box ticking but the film has to hit those setup beats because what it does afterwards is subvert them in a way that marks a real departure for Disney in a lot of ways.

In animation there is often a tendency from both audiences and critics not to discuss acting in the same way that they would when discussing a live action film.  Hopefully Frozen will help change that, because this film is built almost entirely on its characters, and therefore it turns on its performances even more than would usually be the case.  As Anna, Kristen Bell gives a light but feisty performance, creating a character whose warm personality radiates out of a desire to interact with people, especially her older sister.  She plays the character's naiveté with charm and while it's only a small part of the film she plays nicely off Jonathan Groff as the ice salesman she ropes in to help her.

Idina Menzel, as Elsa, has a more layered character to play.  Apparently she was written as a more traditional villain but that focus was changed when composers Robert Lopez and Kristen Anderson-Lopez presented her showstopping song Let It Go.  This is a great choice.  One thing that's often true of Disney films is that their villains are quite simplistically evil, because it's easy to imagine that the young target audience needs things drawn in black and white.  Frozen takes a much more interesting path; Elsa is an antagonist, but the fact she's driven not by greed or malice but by fear means that she's never simple and never truly a villain.  Menzel drives all this home with a complex performance that explodes into life - and the film with it - with Let It Go, which was the first of a few moments when I felt myself getting really emotional.

The colourful supporting cast are all good but the standout is Josh Gad, who is completely heartwarming as a snowman who longs to see summer.  This is another great example of how the film works at multiple levels; Gad supplies some great laughs and one beautiful line that speaks volumes about the character's essential goodness, but behind it all there is an implication of tragedy, because he doesn't understand why he can't see summer or feel heat.  The film doesn't milk this aspect of the character, but allows it to inform his whole arc in a wonderful way that, like all the best things here, is smart, tugging the heartstrings without being too obvious about it.  I was taken by surprise by how much drama there is here and how willing the film is to dig in to the emotions of its characters, in this way it's perhaps Disney's best since Beauty and the Beast.

The film looks beautiful, as you would imagine given the pedigree behind it.  The character design is appealing and cartoony, but not so much so that we disconnect from the emotion behind the story, and the landscapes and settings, especially Elsa's ice palace, are jaw dropping to look at.  The 3D is as unrequired as ever (and I had some ghosting in my screening), but even that didn't detract from the film's best moments.

All this said, Frozen isn't perfect.  The opening half hour clunks a little (though it may work better on a second viewing, once it's clear what is being set up and why the film seems in such a hurry) and while it's a welcome return to the big Broadway style musical Disney of the late 80's and early 90's there are perhaps a few more songs than we really need here (a digression with a family of trolls and the pleasant, but hardly crucial, Fixer Upper slows the film at just the wrong time).  It's a testament to the film and to the performances that these end up feeling like nitpicks, Frozen finds Disney delivering, in a very different way, on the huge promise of Tangled and, taken together, these films may just point the way to a new golden age for the house of mouse.
★★★★☆
Posted by Sam Inglis at 21:37