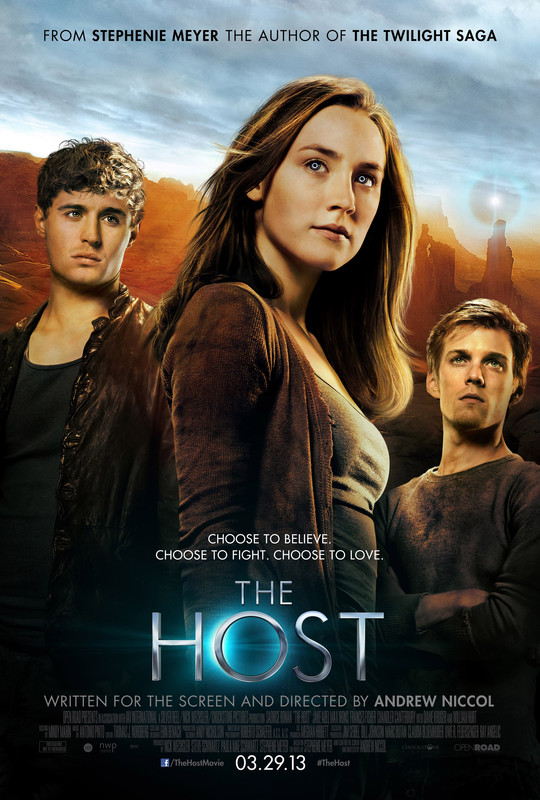 Are you in love? Let’s assume for the sake of argument that you are. What is it that you love about that person? What’s the first thing that comes to mind? I doubt the characters in this film could answer that question and that, in a nutshell, is the problem with The Host.

The film attempts to filter Invasion of the Bodysnatchers through a complex romantic quadrangle. Melanie Stryder (Saoirse Ronan) is one of a small handful of humans left unassimilated by an alien species that has claimed most of the planet. One night, while running to lead the aliens away from her young brother (Chandler Canterbury) and her lover Jared (Max Irons), Melanie is captured and assimilated, but she fights the process, and her consciousness begins to win round the presence (later called Wanda) sharing her body. ‘Melanie’ returns to the human resistance, led by her uncle (William Hurt), but while there ‘Wanda’ falls for another boy, Ian (Jake Abel).

I have to give The Host‘s author – Twilight creator Stephenie Meyer – credit here; this is an unusual and interesting take on a love triangle story, or at least it should be, the problem is that none of the four people involved in the love story (which, despite the alien invasion and constant threat of discovery, is the focus) has any discernible personality. The question of what attracts Melanie to Jared is especially problematic, but we’ll get to that later, the problem is that even if the rest of the film were better, there’s no sense of what, aside from the fact that all of them are objectively very attractive, draws these people together. What does ‘Wanda’ see in Ian that makes her fall for him, rather than for another of the boys (or, heaven forbid, one of the girls)? There are no real clues here, and that totally undermines the emotional impact the film is clearly striving for, and which is inherent to the idea.

Based on the Twilight films (I’ve not read those books, or The Host), it would seem that this blankness of character is an issue inherent to Meyer’s writing, and it also seems that this film’s other major problem stems directly from its source. The Host is a terribly inert and unthreatening film. It sets up an idea that is literally apocalyptic, but uses it to incredibly muted effect. Diane Kruger plays a ‘seeker’, tasked with finding the missing ‘Wanda’, and with a massive (but non-violent) alien bureaucracy on her side. We’re supposed to see this as a huge threat, but Meyer and screenwriter/director Niccol limit the stakes; the aim of the Aliens here is to ‘perfect’ society and the planet. It’s established in early narration that they have ended hunger, ended inequality, ended violence. It’s tough to root for the main characters, or see the aliens as a threat, when what we’re essentially rooting for is the return of free will so people can fuck each other over again. There is perhaps a more interesting and more subversive take to be had on this material, by looking at the humans as the villains (they live in a hollow mountain, how much more supervillainous does it get?)

The pacing is glacial and, just as in the Twilight films, when something exciting happens it tends either to happen to characters we barely realise exist, or to threaten to happen and then be forgotten. The perfect example of the latter is when Kruger’s seeker, hunting for ‘Wanda’ and the humans in a helicopter, sees a flash of light from the mirrors they use to allow them to grow grain. She mentions this to another seeker, but it is swiftly dismissed and never investigated, which as well as just being stupid robs us of what might have been a tense ground level set piece. Inside the mountain, scenes and moments are reiterated over and over, but each new plot development seems to come from nowhere. Why, for instance, does Ian go from trying to strangle ‘Wanda’ to falling in love with her? There’s no throughline to the emotions here.

This question also leads us back to the question of why Melanie and ‘Wanda’ fall, respectively, for Jared and Ian. We see Jared and Melanie’s first meeting in flashback. It’s terribly romantic… he sneaks up behind her and, on discovering she’s human, commits a minor sexual assault, kissing her against her will. After this they team up, moving in together and becoming lovers. In the scene where they truly form their relationship Jared says ‘you don’t have to’ (he’s changed his tune), but Melanie assures him that she does want to, at which point I almost got up and bellowed WHY? at the screen. It might – might – be different if in the intervening time we had some scenes where they build a friendship, where we see a bond develop for reasons based on their respective personalities, but barely five minutes separate these two scenes. The discomfort is compounded by the fact that, when ‘they’ arrive with the resistance Melanie continues to be in love with Jared, whose first act is to punch her in the face, and ‘Wanda’ falls for Ian, who attempts to strangle her to death. Truly this is a heartwarming tale of romance. 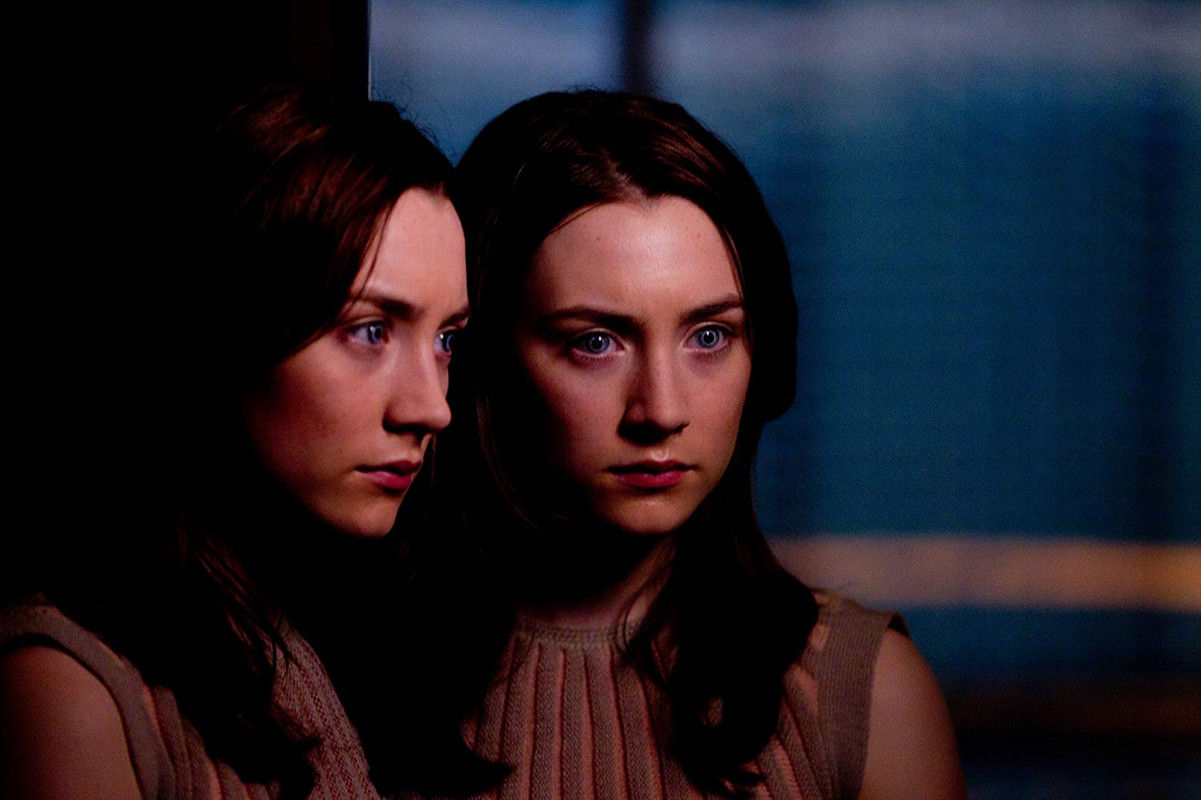 Saoirse Ronan is one of the very best working actresses under 21 (her only real competition comes from Elle Fanning), and she works very hard to draw distinctions between Melanie and ‘Wanda’. Ronan makes Melanie’s Southern origins plain, adding a solid Lousiana dialect to her impressive repertoire of accents, but she gives ‘Wanda’ her own voice; a tone that we’d think of as neutral American. There are many scenes in which Ronan has to talk and react to herself, and while they are often unintentionally comic it’s not Ronan’s performance but rather the unfortunate dialogue and the concept itself that is funny. Within the huge limitations that she’s working with, Ronan is remarkably good, but she can’t be expected to work miracles, and the distinction between Melanie and ‘Wanda’ does eventually come down to the accents and ‘one’s a bit feisty, the other’s really serene’.

Compromised as she is, Ronan is far and away the best thing in the film. Diane Kruger has little to do but stand around looking beautiful and stern, she does this well enough, but it’s frustrating as she’s capable of much more. William Hurt also does his best, but can’t lift his role as Uncle Jeb above ‘gruff and protective’. The real problem is down to the male leads. Chemistry with Ronan, for all the discomfort of the romances, isn’t an issue, but watching Max Irons and Jake Abel act (I say act) is like watching a contest to find the blandest man in the world. I said earlier that Melanie is feisty and ‘Wanda’ is serene. Well, Jared’s… and Ian’s… bear with me, I’m sure there’s something I can write here… You see the problem? Again, it’s tough to blame the actors when they have little to play aside from the fact they are in love with Ronan’s character, but it’s grindingly tedious to have two such major figures struggle to muster up a trait between them.

Andrew Niccol first came to notice with the screenplay for The Truman Show and with his directorial debut Gattacca (which I like rather less than many people), but he’s had a very patchy career since, crashing to the low of the turgid, laughable S1mone. Lord of War had its moments, but In Time was a weak film wrapped around an interesting concept, and The Host follows suit in that respect. Niccol brings little personality as a director, and even if he were at the height of his powers I doubt he could do much with the frequently terrible dialogue he has surely inherited from Meyer’s book. Perhaps the greatest indication of how anonymously directed the film is is the simple fact that, not 24 hours after I watched it, I can barely recall a single image that struck me.

The Host should be a great deal better than it is, and I can see a good film, a good story, buried somewhere in it. If someone could unearth that core, provocative idea: two personalities in one body, each in love with a different person, then set it against a conflict that felt high stakes, in a situation where even the main characters seem endangered, and then cast Saoirse Ronan in the lead they really might have something. As it is, The Host is a tedious, cheesy trudge through the same sometimes troubling themes that Twilight threw up, lacking in character and seemingly wilfully drained of drama. It scrapes a second star on the back of Saoirse Ronan’s efforts to do something with her performance, but she is abandoned by her script and her director.
★★☆☆☆
Posted by Sam Inglis at 10:27