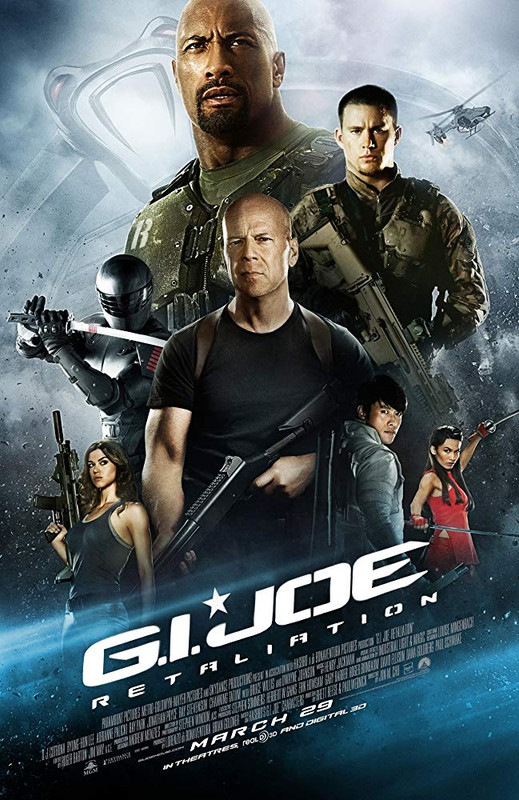 It’s no secret that I’m not very fond of Hollywood’s empty-headed, jingoistic, modern action movies, but somehow I found room in my cold, flinty heart to enjoy 2009′s GI JOE: The Rise of Cobra. It had most of the problems common to modern blockbusters. The characters barely had traits let alone personalities, but something about it worked. I think it was the fact that, without advertising the fact and making a parody, Rise of Cobra had a sense of self-awareness, both film and cast embraced its ridiculousness, and invited us to go along with them. Retaliation has clearly been a difficult film to put together, the cast has almost completely changed, and it was delayed by nine months to allow reshoots to include more Channing Tatum and the bolting on of a 3D conversion (I saw the 2D version). Unfortunately a lot of this turmoil seems to show in the finished product.

Oddly for a film with otherwise represents an almost complete reboot the story, such as it is, picks up where the first film left off. Cobra’s Zartan is in the White House, disguised as the President (a slumming, but clearly entertained Jonathan Pryce). After using Storm Shadow (the returning Lee Byung-Hun) to break Cobra Commander out of a high security underground prison, Zartan implements his extremely silly and convoluted plot to help Cobra take over the world (of course). Attempting to stop him are the JOEs, led by Channing Tatum and Dwayne ‘The Rock’ Johnson. Joining the team are the returning Ray Park as Snake Eyes, Adrianne Palicki as Lady Jaye, Elodie Yung as Jinx and DJ Cotrona as Flint, as well as Bruce Willis as a legendary general, described as the reason the team is named JOE. Like the first film, the story makes no kind of sense, and is the least important thing in the world.

The problem here, and the reason the film as a whole doesn’t work as well as the first, is that the tone, which was so nicely judged before, feels uncertain here. There are moments where the movie has its tongue firmly in its cheek, particularly the early interactions between Johnson and Tatum, who play well off one another. Unfortunately, much of the time, the film wants to strike a grittier tone with its action than the gleeful silliness its predecessor treated it with, and that means that some things that have remained silly and extremely heightened sit uneasily against the other parts of the film. That said, there are compensations that allow the film, in patches, to paper over the cracks.

Some of the cast approach this film understanding what it should be. Walton Goggins, for instance, has an absolute ball with an over the top turn as the warden in charge of the super prison where Cobra Commander (sadly no longer played by Joseph Gordon Levitt) is being held. Jonathan Pryce is also clearly enjoying himself, never more so than in the set piece where he confronts the leaders of the world’s nuclear powers. However, in terms of the cast, the highlight is easy to pick. Whatever you call him Dwayne ‘The Rock’ Johnson simply bleeds charisma; he’s a tremendously engaging and endearing screen presence, and I absolutely buy him as the leader of a military team because I buy people wanting to follow him. Johnson hasn’t yet had a film to break him out; he needs his own Terminator, his Predator, but whenever he’s on screen here he’s got your attention.

The other thing that sometimes makes this film worth the time is the action, particularly one fantastic ten minute set piece that begins with a swordfight in a monastery and ends with ninjas pursuing Snake Eyes and Jinx through the mountains on zip lines. It’s exactly as ludicrous as it sounds, and all the better for that.

The best parts of GI JOE: Retaliation remind me of being a kid playing with action figures (though I never had these toys). At that age your imagination is totally free, and runs with the silliest but most entertaining ideas it can think of. If the whole film had stuck to that tone this could have been a guilty pleasure, just as the first film was. Unfortunately Retaliation too often comes crashing down to Earth, and then you notice that the script is by an illiterate chimp, that as much as you’ve developed a massive crush on her Elodie Yung really can’t act, that Bruce Willis might be asleep and that you really should be feeling guilty for enjoying the other bits. I can’t quite recommend it, but I can’t say I didn’t enjoy myself in fits and starts.
★★☆☆☆
Posted by Sam Inglis at 10:39